The Crinoidea – or Feather Stars and Sea Lilies – are among the most ancient of the Echinoderms.

Most of them consist of a set of many branched arms, connected to a central cup-shaped body – which in some cases possesses a stalk that keeps them attached to the substrate.

One group, the comatulid crinoids, have lost their stalks and live swimming freely in the oceans. They are the most common of the modern crinoids.

The Sea Lilies represent about 12% of the Crinoidea and live their lives permanently attached to the substrate with  – in some cases – cirri arising from their stalks, rather like strange leaves. This combined with delicate, feathery arms which can open and close, gives them the appearance of underwater flowers.

Feather Stars, representing 88% of the modern crinoid fauna, are far more numerous and are all capable of free swimming. Although Feather stars occur all around the world, the greatest number of species is found in the Caribbean region. Here 115 species have been recorded and as many as 12 species may be found in a single square metre of reef. 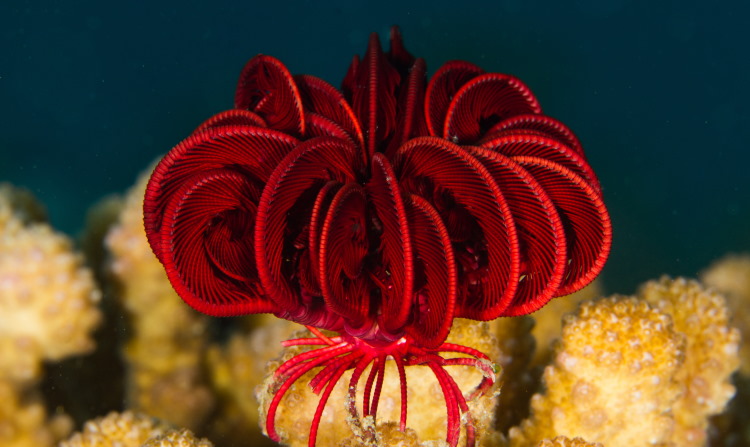 The largest living Sea Lily is called Metacrinus superbus. It has a large calyx, which with its arms gives it a diametre of 1.5 metres. The largest Feather Star is Heliometra glacialis with an armspan of 35 cms.

Although there are only 115 genera and 625 living species of crinoids, they were far more important in the Paleozoic when the echinoderms were first evolving. Crinoids are believed to have evolved in the lower Ordovician and the origin of their ancestors are lost in the Cambrian.

All the Paleozoic species were stalked and many were quite large – certainly larger than today’s few remaining stalked species. There were also many different forms among the numerous species that showed innovative variations, such as Hybocystis which had only 3 functional arms – two having become redundant. The calyx was either stiff or flexible.

Among living forms, a few can have a stalk up to one metre long, but most are much smaller. All known stalked forms live in deep water (more than 100 metres in depth). The free living forms on the other hand, prefer shallow coastal waters and are therefore much better known.

Crinoids are the oldest of the living echinoderms, with a fossil record stretching back 450 million years.

The crinoids are unique among echinoderms for a number of reasons. They are all exclusively filter feeders, trapping particles of food with their arms. Their mouth is held facing upwards (so that scientists say they have “an upward facing oral surface”). The anus also faces upwards.

Filter feeding and having the mouth facing upwards was the ancestral condition – in other words, this is how the original echinoderms lived – making the crinoids the least evolved of all the still extant echinoderms.

The body of crinoids has a cup-shaped central structure called the calyx or theca. This is relatively small in comparison with the whole animal and within it are the body organs, including the mouth and anus. It has a basic pentaradial symmetry with each side giving rise to one of the five arms.

From beneath the calyx their either extends the stalk, which has a holdfast at its far end, or a set of five-jointed cirri. Both of these are root-like structures that are used for holding onto the substrate. The cirri are thinner, more regular and flexible, meaning they can release their grasp and the animal can move to a different site.

Comatulid species, like those in the genus Antedon, can swim by waving their arms up and down. But this is slow and energetically expensive, so most species let currents carry them along when they move and otherwise use their cirri to hold them in a single location.

Inside the calyx is built of a series of calcareous plates or ossicles. The most central ones are called ‘Infrabasals’ and normally there are five. Around them are five somewhat larger plates called ‘Basals and around them five further plates which are larger still called ‘Radials’. This a standard dicyclic calyx, as in the now extinct Inundata and the living Comatulida. 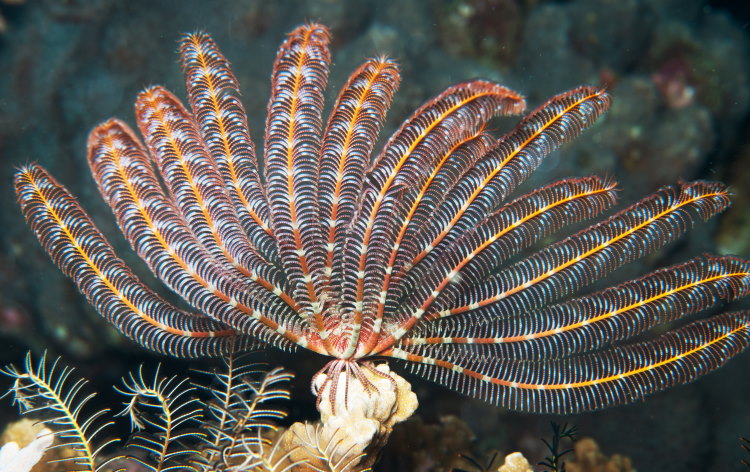 The stalk is built up of the series of disc shaped ossicles called columnals. In those species – such as Antedon – which have no stalk, the infrabasals are replaced by a single large plate called the ‘Centro-dorsal’ plate.

However, nature loves to experiment and among the fossils are many groups where this plan is altered by the loss of some of these named plates (or the addition of others).

Within the cup formed by these plates, is the animal’s body with both the mouth and the anus facing upwards. In some extinct species such as the Ordovician Dictenocrinus, there is a tube supported by ossicles that holds the anus away from the rest of the body.

The arms of crinoids are branched, so that they may seem to have many more than five arms – as many as 200 in fact! But in a complete animal, the number of branches will always be divisible by five.

These arms possess numerous small side offshoots called pinnules, which greatly increase the feeding available to the animal. The arms are flexible, but like the calyx they contain calcareous ossicles which act as the skeleton. These ossicles are called ‘Brachials’. The central supportive ossicles are set towards the back or lower section of the arm with smaller cover plates protecting the sides of the arm.

Above this central set of ossicles, run the two strands of muscle that allow the animal to move its arms. Above this are the 3 coelomic spaces that are enclosed within the skeleton. Above these, outside of the skeleton on what is the upper surface of the arm, is the water vascular system and its tube feet (which in the crinoidea are more like tube fingers). 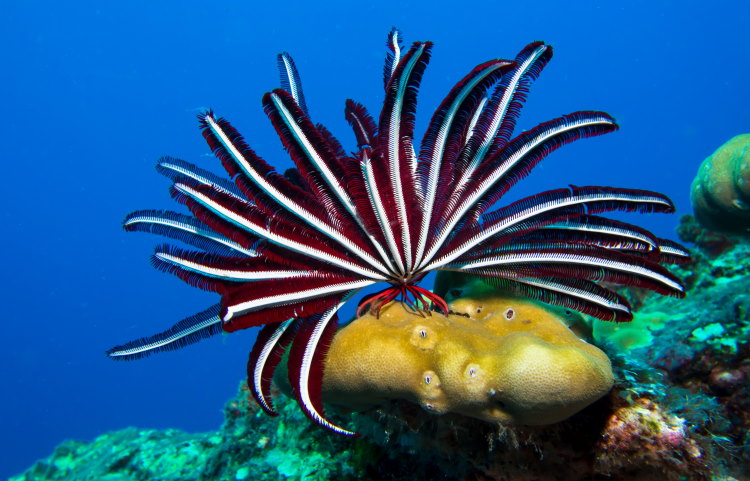 The water vascular system of the crinoids is simpler than that of the more advanced echinoderms. There being no ampulla to operate the podia and no madreporite. The podia are extended by contraction of the sphincters around the water vascular canal instead. Water is allowed into the system by means of a series of small stone canals.

The tube feet possess numerous papillae (small bumps or extensions) which secrete mucous. Along the upper surface of each arm there is a canal called the food groove. When a crinoid is feeding, the tube feet are extended and particles collect on the sticky papillae. These particles – and the mucous that contains them – are driven along the food groove by the beating of cilia. Eventually the food reaches the calyx, with its five food grooves leading to its mouth.

Behind the mouth is a short oesophagus which leads into an intestine. Digestion is carried out by enzymes secreted by the several digestive caecae that extend from the intestine. Wastes are formed into a faecal pellet before being ejected.

There is a lot of connective tissue situated throughout the coelom, reducing it – and the blood system that follows it – to a series of connected spaces.

Crinoidea do have a well developed nervous system which is divided into three separate but interconnected sections. The normal echinoderm nervous system is represented by the oral nerve ring, which has sub-epidermal nerves that radiate out into the arms below the ambulacral grooves.

This system is primarily sensory in crinoids. Beneath this there is the hyponeural system which innervates the the tube feet and the pinnules. Finally there is an aboral (on the surface opposite the mouth) within the calyx which supplies nerves to the cirri and the muscles that operate the arms. Gaseous exchange is carried out over the whole of animal’s body.

Reproduction and Ecology in Crinoids

Crinoids are gonochoristic, meaning they are either male of female.

However they are unusual animals, in that they have no distinct gonads. Instead gametes develop within the small coelomic cavities within the pinnules, by extension of the peritoneum (the membrane that defines the edge of the coelomic cavity) into temporary proximal gonads. 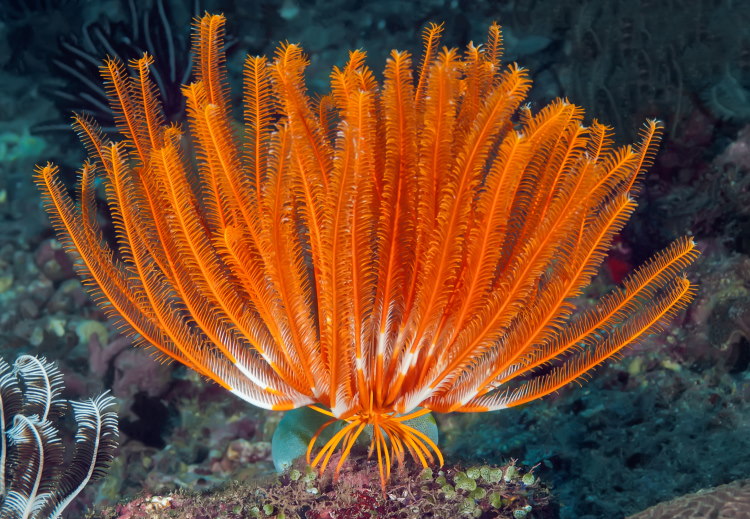 Sea lily on top of coral

When the gonads are mature, the pineal ruptures and sperm are released into the sea. The eggs are cemented to the outer walls of the pinnules, where they are fertilised.

The larvae that develops is barrel shaped (doliolaria larvae) and does not feed. It lives as a free swimming form for a short time, before it develops into a sessile stalked form called a pentacrinoid larvae. In this form it feeds and grows for several months, before becoming an adult.

Though many of the free living crinoidea are found in shallow coastal waters, the stalked forms are normally only found in waters deeper than 100 metres.

Crinoids can be divided into two different types, depending on their feeding strategy: whether they like moving water or not.

Rheophilic forms are more common. These forms may hide in a cavity during the day and emerge at night – using the cirri to walk to a suitable feeding place, where they extend their arms facing away from the current. This still allows the mucous covered tube feet to collect particles from the water and prevents the animal from being polluted by its own waste products.

A good example of a rheophilic form is Cenocrinus asterius from the coastal waters of Jamaica. 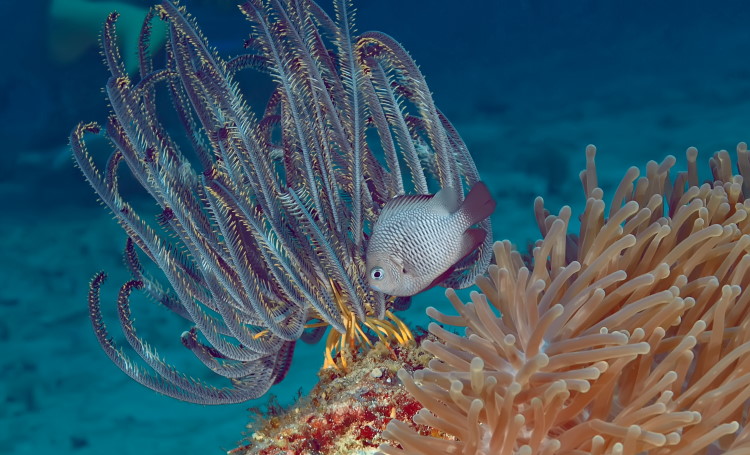 Sea lilies with fish swimming around

As with anything that lives in the sea, crinoids get eaten by other animals. Also because of their often numerous arms, they get used by smaller creatures as a place to hide from predators. Sometimes they suffer damage themselves when predators come looking for these residents.

At least nine species of fish are known to feed on crinoids. With those species that live in high diversity environments, such as coral reefs, suffering greater levels of predation than those that live in the deeper waters.

The triggerfish, Balistoides conspicillum, is a commonly recorded predator of crinoids – biting off bits of arms with its hard flat teeth.

The sparid, Chrysophrys auratus, is the only species of fish known to eat crinoids (comatulids) whole.

Other animals that feed on crinoids include the crab Oregonia gracilis and the Starfish Pycnopodia helianthioides. Like all echinoderms, crinoidea have amazing powers of regeneration and can grow new arms and even new intestines to replace those that have been eaten by predators.

The class Crinoidea is divided into between 4 and 6 subclasses all but one of which are extinct.

The Articulata contains all the currently extant groups in 5 orders 4 of which are Sea Lilies. For more detail see Tolweb.

The Orders of the Class Crinoidea

Of the 625 known species 550 are Feather Stars belonging to the order Comatulida which is divided into 17 families.

Well, I hope this has been a useful introduction to the world of the crinoids, with its wonderful feather stars and sea lilies!

Perhaps now you’d like to check out the salps.