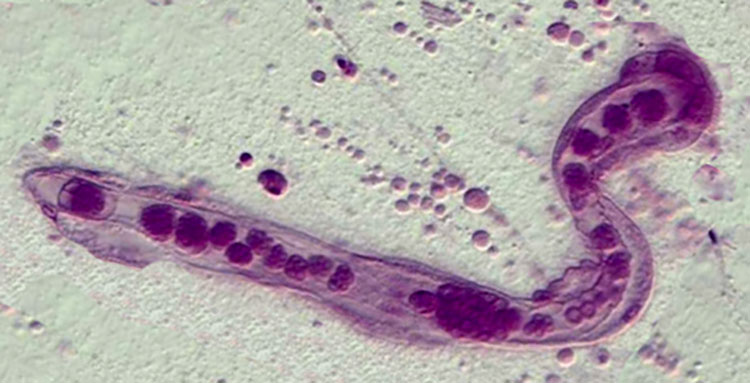 Dicyemida Etymology: From the Greek Di for two and cyem for germ – referring to the existence of both sexual and asexual reproduction in this group.

Dicyemida Species Count:- According to the online database the Catalogue of Life there are 122  living species of Dicyemida

The Dicyemida were once part of the Mesozoa.  However modern phylogenomic analyses suggest the Dicyemida and the Orthonectida are two separate phyla. See the discussion on Mesozoa, or  Zverkov et. al. May 2019.

The Dicyemida are a small phylum of small (0.5 to 7 millimetres in length) and poorly understood parasitic marine animals. They have very simple bodies, often consisting of less than 50 cells. All known species are internal parasites cephalopods.  They are sometimes referred to as the Rhombozoa.   The Dicyemida have no gaseous exchange organs, no circulatory system, no nervous system and no digestive system.

While Dicyemids occur in all known marine waters, coastal to hadal and polar to tropical, and therefore infect cephalopods in all these habitats, the infection rate varies considerably from the poles to the tropics.  For cephalopods in polar environments the infection rates vary from 90% to100%.  However, in subtropical waters the rate is only around 15% on average and it drops to 10% in tropical waters.  Why this should be so is not yet understood.

Ecology and Biology of the Dicyemida

The Dicyemida have a more complicated life cycle than their cousins the Orthonectida.

Their basic body plan is a long, thin central cell called an axial or tube cell, surrounded by a coat of smaller, ciliated cells which are arranged spirally around the axial cell. Some authors equate this with a two cell-layer body plan.

The two forms are physically identical as far as we know. The only difference being that in the nematogen stage, the axoblasts produce more nematogens and in the rhombogen stage they produce infusorigens which serve as the animal’s gonads (organs which produce eggs and sperm).

The eggs are fertilised inside the axial cell where they develop into infusoriform larvae which quickly develop the adult number of cells. Each species has a definite number of cells in its adult form. This infusoriform larvae then leaves the axial cell and the hosts body, with its urine. They then sink to the sea floor where they grow by means of cell enlargement, rather than by cell addition. It is not currently know how these larvae re-enter their hosts and become nematogens.

The phylum Dicyemida contains only a single class, Rhombozoa and no orders. As of May 2021 there are 122 known species, with the last new species being described in 1016.  Because, as far as is known, in most cases, each species is unique to its particular cephalopod host, it is anticipated that the total number of species will eventually reflect the total number of cephalopod species.  This could result in the final species count for the phylum reaching more than 800.

No complete genome has yet been sequenced for the Dicyemida. However, given that their small cell count, even less than that of their ex-partners the Orthonectida, it is likely that they will have a similarly small and compact genome.  Who knows, it may even turn out to the the smallest genome of any multicellular animal.