Home
inverts
The Gastropod Radula And Its Teeth
Help us spread the word...
TwitterFacebookPinterest

The radula is the toothed, ribbon like organ that carries numerous rasping teeth. The radula is unique to the phylum mollusca and can be found in all classes of the phylum except the bivalvia.

In gastropods the radula is typically well developed.  It is the organ that snails and slugs use to collect food particles and delivers them to the digestive system.   Gastropod radulas are highly variable and usually important in taxonomy.  The number of teeth, and the shape of the teeth, sometimes called denticles, is highly variable.

Diagram of the two types of Limpet Radula, with a scan of a rhipidoglossan radula. Compiled from “The giant keyhole limpet radular teeth: A naturally-grown harvest machine” by Tina Ukmar-Godec et. al. December 2015.

A radula may have hundreds of rows of teeth (form 80 up to about 300) and numerous teeth in each row, resulting in the radula having thousands, in extreme cases tens of thousands of teeth.

The teeth at the distal end get worn down, and the membrane gets worn away and eventually both are lost as a result of wear and abrasion.  As this is happening new teeth are added at the proximal end.  Thus the radula is constantly renewed.  The Giant Keyhole Limpet (Megathura crenulata) has more than 100 rows of teeth on its radula.  It loses, and replaces, on average one row of teeth per day.

The Structure Of Gastropod Radula Teeth

The teeth are generally composed of an organic matrix impregnated with inorganic salts (Fe, Si, Ca).  The major teeth of Patella vulgate contain up to 12% ferric oxide in the form of goethite (α-FeOOH), 7%-16% silica as hydrated amorphous opal (SiO2 ·nH2O), and small amounts of calcium as well as various organic components.  Limpet teeth are initially secreted as organic structures composed of chitin and proteins rich in tyrosine.

The secretion process takes time, days.  The development of the teeth can be followed as they move forward.  By row six they are clearly demarcated.  Iron begins to be added as they reach row seven and continues to be added until row 65.  The cusps of the teeth are further reinforced with silica from about the 50th row onwards.  In some species other salts of minerals such as sodium and magnesium may also be used for strengthening. 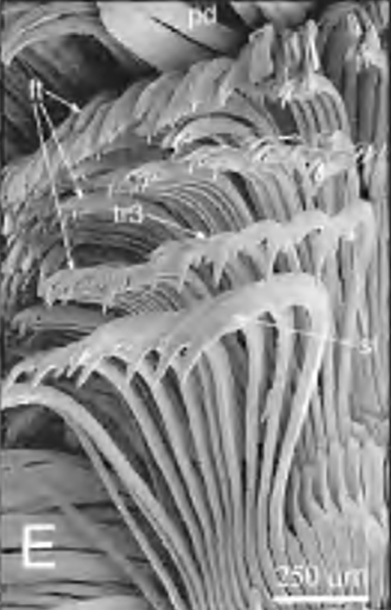 A section of the radula of the Pleurotomariid Entemnotrochus adansonianus showing some of the numerous thin marginal teeth.

Which Snail Has The Most Teeth?

This is obviously an interesting question.  One family of sea snails, the Pleurotomariidae, commonly called slit snails, seems to be the most toothy.  The Pleurotomariidae are part of an ancient lineage of snails and they are renowned for having very long radulas with numerous thin, flexible, lateral teeth.  They are also unusual in that they have more teeth on one side of the radula than on the other.  This is because of the unique way the radula folds up like a zipper when not in use.

The species Perotrochus maureri is, as far as I can determine, the world record holder.  According to M. G. Harasewych the Pleurotomariid radula has between 90 and 140 rows of teeth.  Individual species have different numbers of teeth in each row.  For P. maureri this number is 248.  Multiplied up by rows this gives us between 22,320 and 34,720 teeth.  As P. maureri is a relatively large member of the family it is likely that the higher value is close to the true record. 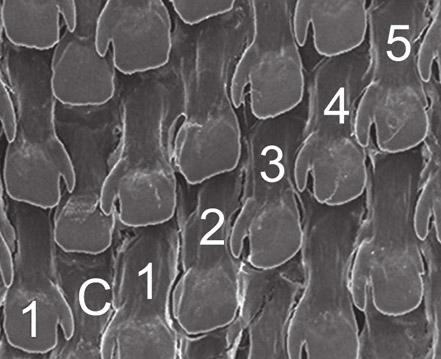 The teeth on a radula are usually designated as four different groups.  Working from the center out to the side they are.

Not all Gastropoda have all types of teeth on their radula.  The number and structure of the different teeth is highly related to diet.  The Cone shells, which use poison to kill their prey have as few as two teeth.  They have no rachidium, no minor laterals and no marginals.  The two Major laterals are modified to carry toxin and be injected into prey, or enemies.  Only one tooth is used at a time.

Scientists have a palindromic formula to describe the teeth in one row of a radula.  It has an R in the middle for the Rachidian tooth, on either side of this a number for the Minor Laterals, then outside of that a D for the Major Laterals and finally on the outer edges another number for the marginals. 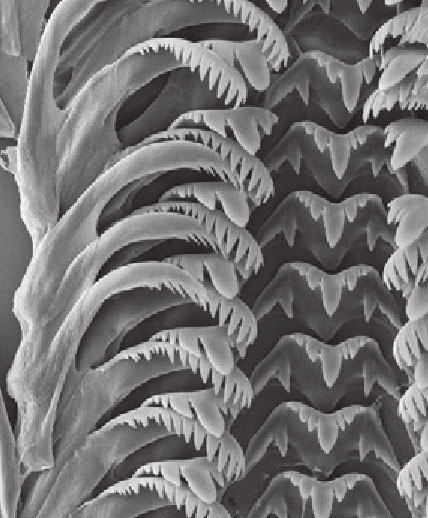 SEM scan of radula of Marstonia comalensis showing center and left hand side of radula.

There are seven basic different types of Gastropod radula.

There is one gastropod species that does not have radula, this is Careoradula perelegans.

Lastly, if you enjoyed all this information, perhaps now you’d like to learn more about the gastropod anatomy or even the gastropod shell.