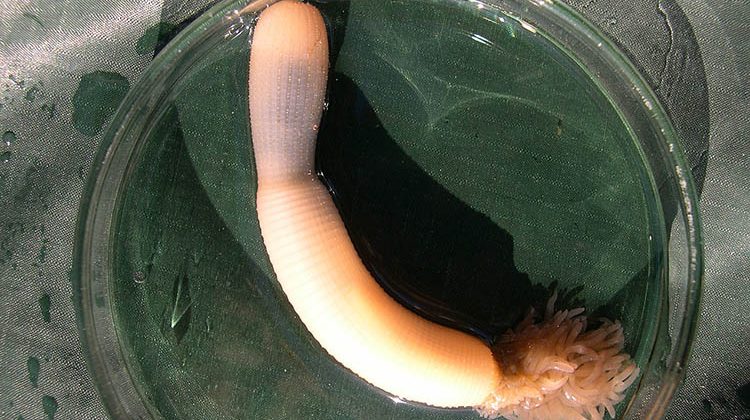 There are 22 species of Priaulidae known to science (COL).

The Priapulida, or Priapula were once considered to be a phyla in their own right, but modern classification puts them as a class in the phylum Cephalorhyncha.  They are a small class (about 22 species known to scientists) of normally small, worm like animals.

They range in length from 0.5 mm for species of Tubuluchus, to around 200 mm for species of Priapulus. They occur in most seas, both tropical and polar, at a variety of depths – from shallow coastal waters to as far down as 7,200 metres.

The name Priapulida refers to the fact that the scientists who first named them thought they looked like human penises – hence “Penis Worms”. However, in all honesty, they look more like some species of cacti… and it would not be unreasonable to use the term Cactus Worms as their common name.

All known species are marine and benthic (meaning they live in or on the sea floor).

The priapulid body consists of two parts; a prosoma, sometimes called an introvert, and a trunk.

The prosoma can be drawn into the trunk which is why it is referred to as the introvert. The prosoma has the mouth at its anterior end. The mouth has 5 spines, called scalids arranged around its opening. There are also rows of scalids running down the prosoma in most species.

The trunk also often has spines or scales and may have, as in the case of the genus Priapulus, caudal appendages (which look like a bundle of worms at the end of the animal’s body).

These are suspected of having a respiratory function. The trunk bears 20 to 30 external annuli (rings) but there is no internal segmentation.

Basic Biology of the Priapulids

The body has a cuticle which contains chitin, as well as other materials which lies outside of the epidermis. This cuticle is moulted as the animal grows.

The body cavity of priapulids is a true coelom, or a pseudocoelom, depending on which authority you consult. Embryology is little studies in these inoffensive creatures – and it is a detailed study of this which will answer the question. Behind the mouth is a pharynx which leads to a short straight gut which ends in an anus at the posterior (tail) end of the animal’s body.

There are no organs for gaseous exchange and no circulatory system. Although in some species, such as Priapulus, the fluid which bathes the internal organs contains corpuscles which carry a respiratory pigment called Haemerythrin. Metabolic excretion is by means of protonephridia.

The sexes are separate and there is normally only one ovary or testis. Eggs and sperm are released into the sea and fertilisation occurs in the sea. The larva has a set of plates (made of cuticle) that surround it. It is possible that it lives in the mud like the adult and it is known to go through a number of moults before it takes on the adult form.

The nervous system consists of a circum-oral ring and a nerve cord running down the ventral side of the body. This cord has a number of ganglia along it from which nerves run out through the epidermis to the rest of the body.

The epidermis is supported by layers of circular and longitudinal muscles which lie within it. The coelom acts as a hydrostatic skeleton.

However, despite this, adult Priapulids are not good at moving and have great difficulty burrowing back into the mud if removed from it. They move through the mud using the spines on the prosoma and the prosoma’s ability to be withdrawn into the body.

Priapulida are all believed to be predators feeding on smaller worms they find in the mud. But some species, such as those in the recently discovered order Seticoconaria, live sedentary lives and have a crown of stiff tentacle-like spines – and may therefore feed on anything that falls into this crown.

The Taxonomy of the Priapulida

Well, I hope this has been an interesting glimpse at the world of the “Penis Worm”.

Perhaps now you’d like to check out the Arrow worms.