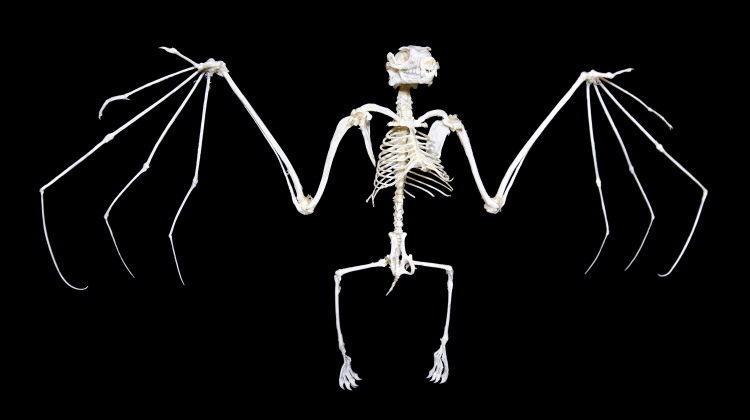 Although bats have all the basic anatomical structures associated with mammals in general, the fact that they fly has resulted in many of these structures becoming highly modified.

Also – when you consider that there are about 1,000 species of bats – it is not surprising to find that there is considerable room for variation withing the group.

The skeleton of a generalised bat is shown below.

The most obvious changes are of course in the greatly elongated bones of the fore limbs, particualrly the metacarpals and phalanges. Looking a little closer, we will find that some bats have developed an extra bone on the hind limbs near the ankle.

This small bone, which helps support the uropatagium (which is that flap of skin that extends between the back legs and the tail) is called the calcar, or calcaneum.

Bats also have an extra bone at the elbow. This very small bone, which is the upper arm equivalent of the patella, is called the ulna sesamoid. A third major change, which is not visible in the diagram, is that the legs of bats are rotated through 180º – which means that their knees flex in the opposite direction to those of a human or a cat.

In general bats have:

In some species, the last cervical and first thoracic vertebrae are fused. The bones of the pelvic girdle (ilium, ischium and pubis) are more strongly fused than in other mammals. The megachiroptera have no caudal vertebrae, and hence no tail.

The bat skull is highly variable in its shape. This variation is dependent on the the animal’s diet, with nectar feeding bats having long thin skulls – while many insectivorous species have relatively short blunt skulls.

The bones of the forelimbs are all elongate to some extent, with the degree of elongation becoming greater the farther the bones are from the body. The bones of the thumb, the only digit capable of free movement (metatarsal 1 and phalange 1) are not greatly enlarged.

The ulna is greatly reduced and often fused to the radius, which in turn is strong to allow it to support the wings. The wrist is highly flexible, allowing the wing to be folded down like an umbrella. In most bats only the thumb retains a claw, but in some flying foxes the 2nd digit has a small claw.

The hindlimbs are rotated through 180º. Thus when a bat walks on the ground, its knees stick up into the air.

The lower section of the hindlimb is composed almost entirely of the tibia. The fibula is vestigial (like the ulna in the forelimb, only more so) and fused to the tibia. The whole limb can rotate through a wide angle, allowing a hanging bat to swivel its body through a complete circle.

The toes of the hindlimbs all have strong, laterally compressed claws and an automatic locking system involving a tendon that passes through a sheath of cartilaginous rings attached to the phalange, which constrain its movement.

This tendon is so attached, that it is the bat’s own weight that keeps it taught. This allows the bat to sleep without falling from its roost. Birds also have a locking mechanism on their claws to stop them from falling off their perch, but their system is quite different.

The bones and muscles of the wing are so arranged that the wing is extended/opened and closed through the operation of only a single muscle for each action.

The shape of the bones is such that lifting – or relaxing – the humerus stretches a muscle attached to the radius, pulling it out or in. Moving the radius has a similar effect on the carpals and metacarpals (see diagram), thus the whole arm can be opened and closed very quickly and efficiently with a minimum of muscular effort.

Well, I hope this has helped to explain a few of the wonders of the bat skeleton!

Perhaps now you’d like to learn about how bats fly.