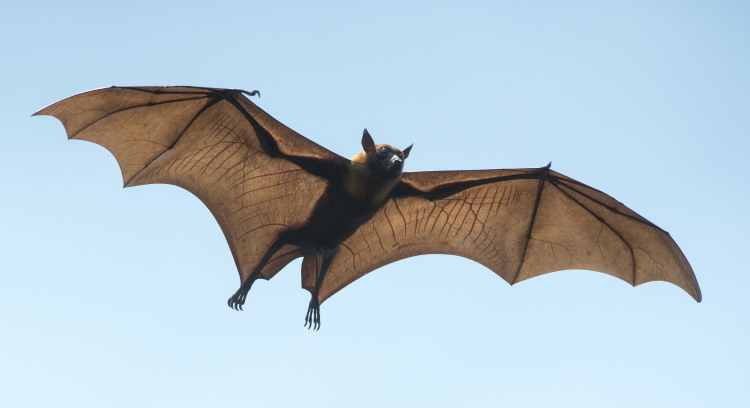 How Do Bats Fly?

It is, of course, one of the most notable things about bats:  they can fly.

To do this, they have wings. Wings that are composed of a double membrane stretched, over a framework of finger bones. See bat anatomy for more on wing structure.

But, just how do bats fly?

Well, flight is a fascinating thing. In the human mind it symbolizes freedom and it is quite likely that it first evolved – via gliding – as an escape mechanism.

If you are in a tree and an enemy is behind you – and you can safely jump out of the tree and he can’t – you are definitely on a winner.

Of course, Nature always likes to get good value for her ecological money. By gliding from one tree to the next you can:

All these things make it highly likely that flight will evolve. And so it did.

Once you have become successful through learning to fly, speciation will soon ensure that diversity manifests – and so we have many species of bats and they use their powers of flight differently.

Consider the flight of a small insectivorous bat that hunts up and down a stream, a second that delicately picks insects off the leaves of trees and a large flying fox that travels forty or fifty kilometres in a straight line to a tree of fruit – and then flies home.

All these bats are flying, but they are doing different things.

Look at some aeroplanes, the wings of fighters are different to the wings of long distance bombers, which are different again from spy planes. This is because the dynamics of flight vary depending on what you actually want to do once you are in the air.

And so the wings of bats also vary.

Although the current level of scientific analysis of the costs and benefits of flight in both birds and bats is highly unsatisfactory (leading to often spurious statements by writers such as “flight is three times as expensive as running”), science does supply us with a lot of information that helps us understand flight.

The maths however is quite complicated. So what I am going to write here is really very simplified. Flight is more expensive energetically than any other form of locomotion – at least fast flapping flight – but the exact relationship depends on many things and is highly variable.

When an animal flies it needs to generate ‘lift‘, an upwards force equivalent to, or greater than, the downwards force of gravity.

It also needs to generate ‘thrust‘, the force to push itself forward and be able to manoeuvre, i.e. turn, twist, somersault, etc.

To complicate things there are also the problems of ‘drag‘, the resistance that the air supplies. Which as anyone who rides a bike knows, increases the faster you go.

There’s also ‘turbulence‘, which includes the fact that the air has currents within it – and that moving anything through it creates vortices and other irregularities of flow.

Anyone who has watched an insectivorous bat flying will know bats are good at this. They can in fact fly very well, so it is obvious their wings overcome the problems and do all three of these jobs well.

However, the ideal physical shapes for doing each of these jobs are different. So the wings that a bat, or a bird, actually has are a trade off between the optimums for these various factors (and the physical limits of flesh, blood and bone).

Gliding And Lift During Flying

Lift is generated by a combination of the shape of the wing and the passage of air across it. Basically this is because the wings of bats are not flat, but are shaped like an aerofoil – meaning they are an irregular concave shape.

Because of the curvature of the wing, the air that moves over the top of the wing has further to travel to get across the wing – thus it speeds up. This causes the air pressure above the wing to drop because the same amount of air is exerting its pressure over a greater area. Therefore, any given point experiences less pressure. This effectively sucks the wing up.

Meanwhile, the air going below the wing experiences the opposite effect. It slows down, generates more pressure and effectively pushes the wing up. Hence a bat with air moving over its wings is pulled up from above and pushed up from below at the same.

From this you can realise that larger wings will generate more lift than smaller wings. The adverse side of this is that the larger your wings are, the greater the energy requirements of flapping – and the greater stresses there are on the physical structure of the wings.

Larger wings are also harder to turn, which means reduced maneouvrability. Therefore there are limits to how large an animal’s wings can actually be.

Secondly, we can see that flying faster generates more lift per unit of time than flying slowly. However it also generates more drag. As drag is proportional to the third power of the speed, with each unit increase in speed the costs of overcoming the created drag not only increase, but increase faster than the energetic benefits generated by the increased lift.

Hence a point is soon reached where flying faster costs more than it is worth.

All this has really been applicable to simple gliding. But now we need to consider flapping.

Flapping causes air to pass over the wings, thus it generates lift. Remember lift is generated by the passage of air over the cambered wing, not necessarily by movement of the animal relative to the ground.

Flapping also pushes against the air rowing the bat through the air. Forward movement is generated because the animal changes the angle at which the wings pass through the air – and the shape of its wings on the up and down strokes.

Thus the wing is broad against the air on the down stroke, but tilted to slide through it – with the minimum of resistance – on the up stroke.

Each flap of a bats wing therefore generates some lift and some thrust, but there is a trade off. If you maximise thrust, you decrease lift – and visa versa.

Thus by changing the tilt of the wing, the shape of the wing, and the angle at which the wing is held while it is passed through the air, the bat can control how much lift and how much thrust it gains from each wing beat.

Because lift is proportional to the airspeed over the wings, if you want to fly slowly (relative to the ground) and not fall out of the sky, you have to flap your wings more quickly – and to hover you need to flap them very quickly.

Taken into consideration with the fact that the larger your wings are, the less quickly you can flap them, and that the greater your body weight, the larger your wings need to be in order to generate enough lift to fly at all, you can see why only small bats and birds hover using active flapping to maintain a stationary position relative to the ground.

Now we know it all works because that is the way both bats and birds are designed. Therefore when scientists are studying how bats use their wings, they measure the animal’s body mass, which is relevant to how much lift the wings need to generate and the length and breadth of the wings.

From these they generate two parameters called ‘aspect ratio’ and ‘wing loading’. Aspect ratio is wing area2 divided by wing breadth and wing loading is the ratio of wing area to body mass. By looking at this data we can, in retrospect, get some idea of how our animal lives.

So if we look at some real data from some real bats, we can get an idea of how this all works out.

What we see is that bats that feed on resting insects (or those crawling over vegetation) and which therefore forage very close to the vegetation – the ones that need to able to fly slowly, to hover and to be the most acrobatic – have short wings with both low aspect ratios and low wingloading. Because wingloading is related to mass, they therefore also tend to be small.

Bats that forage between (or around) vegetation but which catch flying insects or animals off the ground – and which need therefore to fly faster, but still with a fair degree of maneuverability – have medium shaped wings, with similarly low aspect ratios but somewhat higher wingloadings. Keep in mind that aspect ratio is always higher for larger bats than for small ones that forage in a similar way.

Note that the high wing loading and low aspect ratios of fruit bats also allows them to carry weights, such as their young, without too much trouble.

We see this again in the carnivorous Megaderma lyra, which will catch relatively large prey items and carry them to a suitable roosting site to feed.

A bat flying free has an aspect ratio of 6.2 and a wingloading of 11.8, however studying its ecology we can see that when it is carrying a prey item its mass is effectively increased by the mass of the prey.

Thus, as wingloading is a function of mass, this (obviously temporarily) increases its wingloading to as much as 24.3 – and its wing design has evolved to allow this. Thus it operates as a fairly maneuverable unladen vegetation hunter, but as a heavy transporter when fully laden.

Note that the wing design of smaller nectar and pollen feeding bats (most of which also eat some insects) depends on how they forage. If they hover in front of the flowers, then they tend to have both low aspect ratios and low wing loading. But if they fly to the tree and then crawl around within it to feed on the flowers, then they usually have much higher wingloadings.

Well, I hope this has helped you answer the question of “how do bats fly?”.

Perhaps now you’d like to learn more about the evolution of mammals.