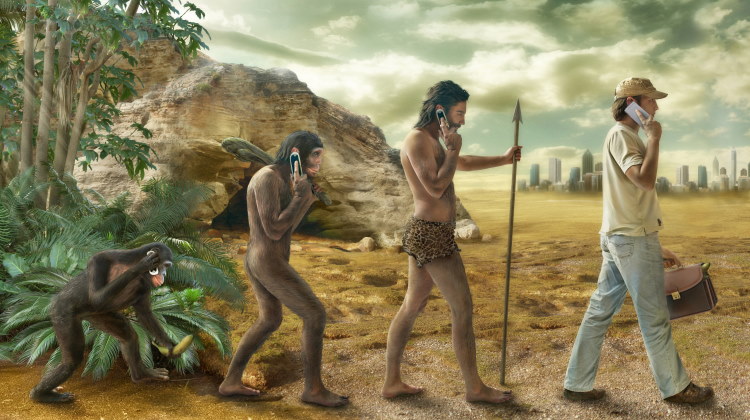 The evolution of human beings is a subject that fascinates many people.

We all want to know who our ancestors were.

Human beings are mammals, then primates, and then anthropoids. Among the primates, our closest relatives are the Chimpanzees and Bonobos in the genus Pongo. Humanity is in the genus Homo, thus our species is known scientifically as Homo sapiens.

Scientists have two different routes of examining the question of our ancestry. The first is by studying the relationships between us and our nearest living relatives, the second is the fossil record.

How Closely Related Are Humans To Chimpanzees?

DNA analysis, has been telling us that there is only a 2 to 3 percent genetic difference between us and the chimpanzees for many years now – and you will find the figure of 98.5 percent similarity quoted all over the place.

However, recent more competent research has suggested that the difference might be more than 5 percent and even this figure is only an estimate.

Nevertheless, this is a large enough difference to place them in a separate genus. They are still only our nearest relatives, not our ancestors.

While the examination of fossils does not allow as exact comparisons as DNA and protein analysis of living animals, it does give us a glimpse into the past – allowing us to develop some idea of who we evolved from.

Who Did Humans Evolve From?

However the record is patchy, and scientists are not in agreement as to the best way to interpret it.

The discovery in Africa in 2002 of a good condition fossil skull now named Sahelanthropus tchadensis has upset many of the previously accepted concepts of the flow of human evolution.

This is because the best archaeological dating we have of it places it as having lived between 7 and 10 million years ago. However it has morphological characteristics that are mixture of those we are used to seeing on both Australopithecines and Hominins.

The well developed brow-ridge for instance, is similar to those found on Hominins living less than 2 million years ago. Thus this discovery is forcing scientists to reconsider their theories of human evolution.

The most likely answer is that S. tchadensis represents an evolutionary branch that is now extinct and is not a direct ancestor of humanity or even of the Australopithecines.

This lack of certainty in relationship to the question of exactly which species gave rise to which other, is present in all studies of the fossil record.

In truth, the best we can honestly do is to look at the history as it is presented to us by the fossil record and acknowledge that it is quite likely some of the species represented were our direct ancestors and most weren’t.

Any more serious claims are merely speculation, however well informed and thought out they may be.

To the best of our current knowledge, the first primates evolved between 60 and 70 million years ago with genera like Plesiadapis. Within about 10 to 20 million years, this early group had split into sections. The prosimians, which gave rise to Lemurs and Tarsiers and the Anthropoids which lead to modern Apes, Humans and Monkeys.

Approximately another 10 million years later (between 50 and 40 million years ago) some monkey ancestors found their way to S. America where they became the Ceboidea.

The Ceboidea are distinguished by their widely separated nostrils and their long prehensile (capable of grasping) tail. They also have less opposability in their thumb than their African cousins. At about the same time the ancestors of the modern Old World (Africa, Europe and Asia) monkeys, known as the Cercopithecoidae, separated from the ancestors of the Hominoids.

The earliest known fossil that is reasonably believed to be an ancestor of humanity – and the modern apes – yet distinct from the rest of the primates is Aegytopithecus sp. This is a spaniel-sized animal that lived towards the end of the Oligocene, about 30 million years ago.

It is known from several fossils and is commonly called the ‘dawn ape’ because despite its still highly primitive features, it seems to represent the beginning or dawn of the evolution of humans and apes.

Dryopithecus means tree-ape and fossil species of this prolific genus have been found in Africa, Europe and India. One species in particular, D. africanus appears to be a close relative and possibly an ancestor of modern Chimpanzees.

Ramapithecus brevirostris was first discovered by G. E. Lewis in India in 1932 and is named after the Indian god Rama. Since then a number of other fossil teeth and bits of jaw bones have been found that are also considered to from Ramapithecus, some from S. Africa.

After Ramapithecus there is a period of about 8 million years for which we have very few fossils. Orrorin tugenensis along with the more recently discovered Sahelanthropus tchadensis mentioned above occur towards the end of this gap, but neither are considered to be direct ancestors of humanity.

One important consideration when studying human evolution, is brain size – because the complex society we live in now is dependent on our large brains.

Homo erectus is the best known of the early homonins. They stood 150 to 170 cm (5 to 5.5 ft) tall and had low foreheads, strong browridges and practically no chin. They stood erect and were good walkers on their long straight legs. They lived from Africa across Eurasia to China. They lived, as far as we can tell, in small social groups of perhaps 20 to 50 people.

They used a variety of stone and bone tools for hunting, wrapped themselves in animal skins to survive the cold, used caves and quite possibly built simple wooden shelters. The size and shape of their brain indicate they probably communicated with a simple language.

So Who Is The Direct Ancestor Of Humans?

Scientists now recognize 6 species in the genus Homo, with H. neanderthalensis being the most recent of the extinct species and considered by many to be the direct ancestor of H. sapiens.

However, considering that for most of their fossil record the two species co-existed it is highly possible that both species arose independently from one or two of the three earlier species: H. erectus, H. antecessor and H. heidelbergensis (see graph).

They used a wide variety of stone tools, particularly flint which they learned to shape to make scrapers, axes, spear points, as well as various borers and blades. Like modern humanity, and the Cro-Magnons who displaced them, they existed in various races.

They still had large faces with forward projecting jaws and brow ridges, however in some groups the brow ridges were disappearing and the back of the skull was becoming more rounded. H. neanderthalensis first occurs in the fossil record about 200,000 years ago and they died out about 28,000 years ago.

Evidence from New Scientist Jan 2004 suggests that Neanderthal Man was poorly adapted to the cold and that their populations in Europe migrated back and forth, as the ice ages came and went.

Around 40,000 years ago, the first H. sapiens in the form of Aurignacians were arriving in Europe. The archeological evidence suggests that they too had a low tolerance for the cold and that they also migrated southwards around 30,000 years ago to avoid the spreading ice sheets.

It appears that Europe was the last refuge of Neanderthal Man, and that it was his inability to adapt to the cold, combined with competition with H. sapiens, that finally finished him off.

However, research from 2011 suggest that the large noses of the Neanderthals may not have been an adaptation to the cold after all. The question remains open.

The Aurignacian people were also in serious trouble because of this ice age, but around this time a new group of humans, called the Gravettians started to appear in Eastern Europe. They had more sophisticated tools and, more sophisticated concepts of tool usage, including making clothes. It was this that allowed human beings to survive in Europe.

Well, I hope this has been an interesting peak into the huge question of human evolution!

Perhaps now you’d like to learn more about the evolution of mammals.