Home
mammals
Evolution Of Mammals: From The Very First To The Modern Day
Help us spread the word...
TwitterFacebookPinterest

The Evolution of Mammals

They have a backbone which encloses a sheath of nerves that lead in turn to a brain in a box or skull.

They also have four limbs and special pentadactyl ends to these limbs (i.e. 5 fingers and toes). Reptiles, amphibians and even birds – as well as the awe inspiring dinosaurs – are all built around this same simple plan.

Before this there were fish, which had the backbone and the skull – but not the pentadactyl limbs.

Fish are pretty ancient. They first appeared around 510 million years ago. Nobody lived on land then, only in the seas. By about 350 million years ago, the insects and plants had been dominating the land for around 50 million years, so there was plenty of food for adventurous fish to eat. If only they could live and move around on the dry, horrible land…

Eventually, some fish transformed their fins into legs and in time they also developed lungs. Legs for moving and lungs for breathing. The invasion of the land had begun.

About 10 million years later, reptiles started to differentiate (become different) from amphibians and diversity was well underway. Various groups evolved out of these early reptiles including crocodiles, dinosaurs and birds. But most importantly to us, a strange group of animals called the Mammal-like Reptiles. 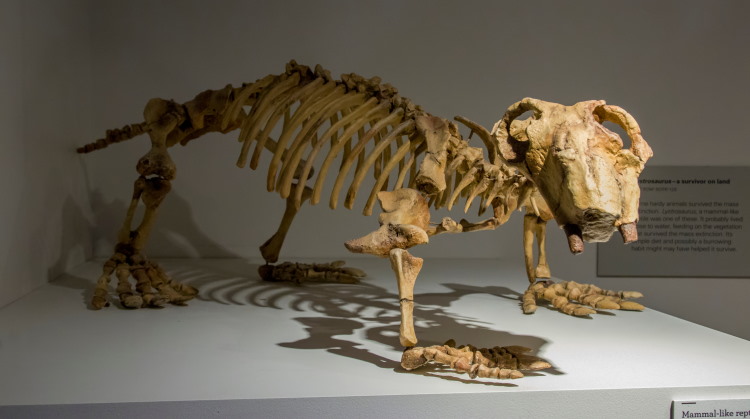 The Mammal-like Reptiles, or Therapsids, first appeared about 285 million years ago – near the beginning of the Permian (which is well before the dinosaurs).

They evolved quickly and many different groups arose. They were very successful until about the end of the Permian, about 245 million years ago. Then something catastrophic affected the earth and nearly all of the species then living died out.

New species evolved rapidly to fill this empty habitat. Among them the first dinosaurs and a few million years later, the first mammals.

The first mammal may never be known.

But a possible contender is the Genus Morganucodon and in particular Morganucodon watsoni, a 2-3 cm (1 inch) long weasel-like animal whose fossils were first found in caves in Wales and around Bristol (UK), but later unearthed in China, India , North America, South Africa and Western Europe.

Morganucodon watsoni, a contender for the first of the mammals (artist’s impression)

It is believed to have lived between 200 MYA and 210 MYA. However, Gondwanadon tapani reported from India on the basis of a single tooth in 1994 may be an earlier contender for the title, with a claimed date of 225 MYA.

These early mammals were small, insectivorous, nocturnal, hairy and warm blooded animals. Warm-bloodedness is believed to have first evolved among the cynodonts, a late but successful group of mammal-like reptiles, from which the mammals evolved.

The cynodonts were the only mammal-like reptiles to survive to the Jurassic. In fact, they nearly made it into the Cretaceous and definitely coexisted with many of the major dinosaurs.

During the Jurassic the mammals remained small and mainly nocturnal, living beneath the ‘metaphorical’ feet of the great dinosaurs. These early mammals were more like small monotremes and probably laid eggs still. Marsupials and placental mammals (cats, dogs, you and me) did not evolve for another 70 million years.

About 8 main lineages of mammals are known from the late Jurassic, many known only from their jaws. Some more complete specimens include Crusafontia, a 20 cm (8 inch) long insectivore which probably looked like a tree shrew – its limbs show definite evidence of an arboreal existence.

Towards the end of the Jurassic, a group of mammals known as ‘multituberculates’ appeared.

These were to prove to be the most successful of the primitive mammal groups, with species still alive only 30 million years ago (MYA). Meaning that they had survived as a group for 130 million years.

Some of the later multituberculates possessed marsupial-like bone structures, which indicate that they had pouches like marsupials. This suggests a similar life cycle, involving live birth of very premature young. 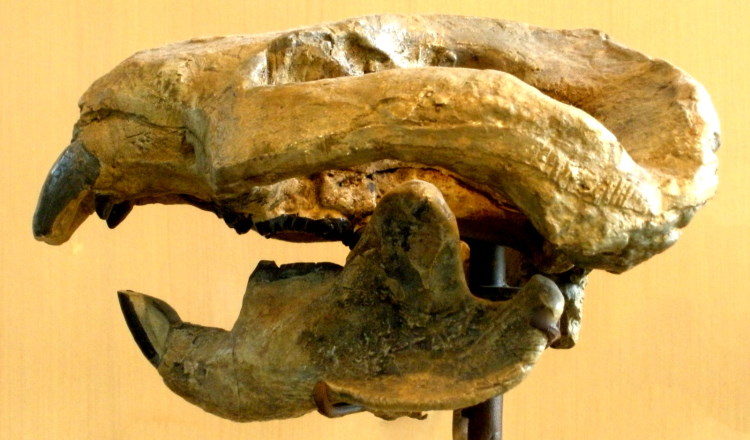 Fossil of Taeniolabis, an extinct multituberculate

The fossil record gets a little better from the Cretaceous onwards, with a few complete skeletons such as Kamptobrator from Mongolia. However, as far as we know, mammals were still playing a fairly insignificant role in the ecology of the time.

Though scientists are still unsure as to its causes, it is known that this “KT event” (as it is known) resulted in the complete extinction of the dinosaurs.

It also saw the death of all the Pterosaurs, the flying reptiles. All these species dying out left huge niche vacancies in the habitat. Following this disaster, it was the mammals alone of the remaining groups of animals, who diversified to take advantage of this new situation.

Over the next 15 million years, the remaining 10 mammal families (five became extinct with the dinosaurs during the KT event) expanded to become 78 families by the early Eocene.

The number of genera increased from about 40 to over 200 during the same time. This sudden massive increase in species from a single stem group is an example of what is called ‘adaptive radiation’.

By the middle of the Eocene (45 MYA), all the major groups of mammals alive today had come into existence – though not necessarily as we know them now.

Primates for instance, have been around since the beginning of the Paleocene (65 MYA) but the distant bipedal ancestors of man only occurred for the first time 5 MYA.

The same applies to all the other major groups. The Jurassic and Cretaceous (150 million years) was the age of the Dinosaurs, a long reign as a dominant animal group. The Tertiary, however, has been and still is the age of mammals. 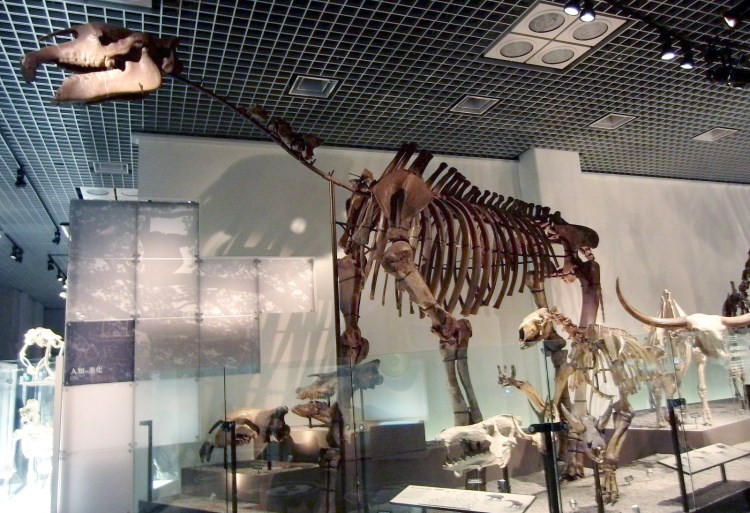 This is 25% of the existing mammals, then, and is important. Because for the previous 20 million years before that no major groups died out at all. We do not know why these groups died out.

Huge numbers of fossils have been found from the Oligocene and Miocene, including the giant terrestrial mammals like Indricotherium which was 5.4 m (18 feet) tall at the shoulder. Brontotherium, an elephant-sized oddity with two blunt horns. And the giant sabre-toothed cat, Smilodon.

Finally, it is worth knowing that besides fossils found in rocks in bits and pieces (as is often the case), a lot of what is known about the evolution of mammals from the fossil record come from Logerstatten.

Logerstatten are fossil deposits of exceptional richness which include numerous species preserved in their entirety. Sometimes even including hair and gut contents. One example of this is the shale deposits at Messel in Germany. Another source of remarkably well-preserved specimens are the tar pits of Texas and southern USA.

Well, I hope you have enjoyed this brief look into the millions of years of mammal evolution. For those wanting to know more I recommend The Beginning of the Age of Mammals by Kenneth D. Rose.

Otherwise, perhaps now you’d like to learn about Human Evolution or what causes different skin colors.