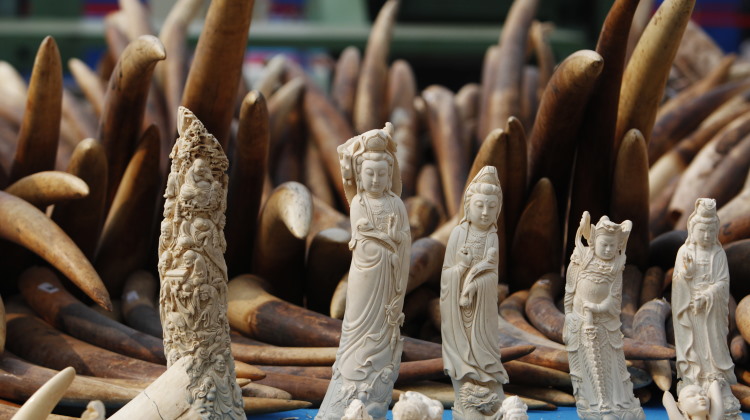 The ivory trade is an important aspect of the economy of Africa.

It involves 150 of the worlds 190 countries and it isn’t likely to just go away. We need to find a stable solution to the situation. Here is a brief discussion of the problem, as it is seen in November 2002.

There were 1.3 million African elephants in 1979, there are 420,000 today. Trophy hunters currently pay $40,000 to hunt an elephant. Fifty percent of all the illegal ivory sold goes to China, though much of it is exported again once it has been carved.

In 1999 there was a massive Ivory sale, five million dollars worth of ivory was sold off to Japan which paid 101 dollars per kilo. Botswana, Namibia, South Africa, Zambia, and Zimbabwe still have over 100 tons of ivory stockpiled, they want to be able to sell some of this off.

Many other African countries also have undisclosed stockpiles of ivory from both legal culling and from shipments confiscated from illegal poachers.

Kenya and India are violently opposed to any resumption of ivory sales, they say the 1999 sale has stimulated poachers and made it easier for them to dispose of their illegal stocks.

The five proactive countries argue that by legalising the ivory trade again, they will be in a better position to fight illegal poachers who have been killing off Africa’s elephants for decades now. CITES imposed a world wide ban on ivory sales in 1989 after poaching had greatly reduced the number of elephants in Africa.

A public awareness campaign succeeded in reducing the demand for ivory, helping the battle. But the world seems to have a short memory, so now poaching and illegal ivory sales are increasing rapidly.

In June 2002, 6 tonnes of illegal ivory from Zambia was found in a single shipment moving from Singapore to Japan. Another 3.6 tonnes from Kenya was seized in Shanghai towards the end of September 2002. This represents a lot of dead elephants.

In the year 2000, one report on illegal ivory sales in 15 African countries claimed that most of the sales were to European tourists, diplomats, UN staff and foreign military personnel. Meanwhile Zimbabwe is in the unusual situation of having an elephant population that keeps increasing and they are having to kill off some of the elephants to control the population otherwise the herds will devastate agriculture.

On a continent like Africa, reliable data is often difficult to obtain because of the low levels of technology and high levels of political unrest and corruption. The truth of the situation is extremely complicated, simplistic answers never solve ecological problems.

Many people in Africa live in poverty and having rich foreigners tell you that you cannot kill off the elephants that are destroying all your crops and even wrecking your homes is an impossible situation to live with.

Paul Funston a conservation expert from S. Africa says, probably quite rightly, that allowing local people to make some money out of local elephant populations will give them an incentive to support governmental efforts to fight poachers.

It is a fact that elephants are large and destructive animals, the 1.3 million elephants alive in Africa in 1979 pushed over an estimated 150 million trees a year.

A compromise of some sort is needed. Human beings will never simply give up living so that elephants can, but also we can’t allow the dehumanised portions of our species to simply destroy all the elephants for the sake of a few easy dollars.

As with all ecological problems, understanding and loving the truth is the key to successfully dealing with the problem of elephants, their ivory and the lust for it that infests many human minds. For now the best thing you can do is to make sure you do not passively participate in the ivory trade by buying ivory products, until the illegal poaching has been stopped once and for all.