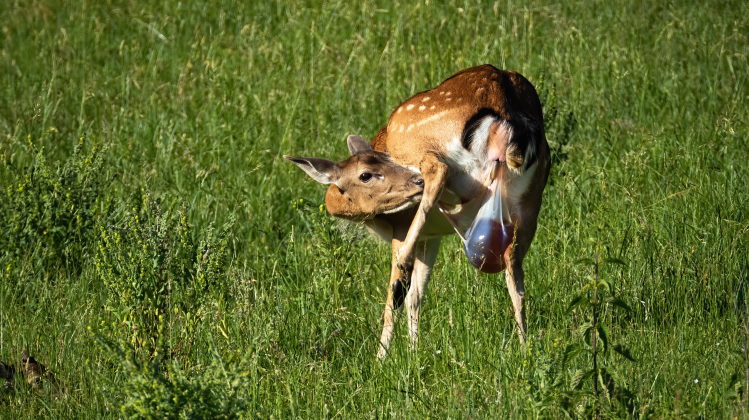 The Placental Mammal and Reproduction

Most mammals – excepting Monotremes and Marsupials – are placental mammals.

Yaks, rabbits, cows, hippopotamuses, bats and humans all fall within this category.

In all other vertebrates, the developing embryo is separated from its mother’s body by the amniotic membrane which surrounds the egg.

The reason for this is that after fertilisation, the embryo takes on its own existence as a separate organism. This is because the mother’s auto-immune system (her internal defence mechanisms) will recognise the new embryo as a foreign body and attack it.

The amniotic membrane isolates the young embryo from all biological interaction with its parent, thus protecting it from attack.

This is good – without it, no reproduction except parthenogenetic would occur. The problem with it is that no nutrients can cross the barrier either. Thus once the young embryo is formed, its growth is limited to the amount of nutrients it has inside the egg with it.

In many species of vertebrates this means that the young are born very small. In the case of amphibians, fish and reptiles they must fend for themselves as miniature versions of the adult.

Birds get around this problem by using a system of intense parental care of the young, after they emerge from the externally incubated egg (except Megapodes whose young may never see their parents).

The most primitive, non-placental mammals – the monotremes – also lay eggs.

The young which hatch from these are fed on milk – not on caught or collected food as in birds. Marsupials, the next evolutionary step, do not lay eggs. Instead, at the end of a short gestation period, the young are born live – but very immature to struggle to a teat and start feeding.

Marsupial mothers have a pouch covering the area where the teats are and it is in here that the young spend the next stage of their lives. Still, within the womb, embryonic marsupials (except for the Paramelidae) receive no nourishment from the mother after fertilisation.

The Magic Of The Placenta

The placenta is the organ from which our group of mammals takes its name. It is the main reason we, the placental mammals, are so much more successful than other mammals.

The placenta is composed of several layers of material. It is very richly supplied with blood vessels and acts as an immigration barrier between the mother’s system and the developing embryo’s.

In this way, white blood cells and other immune system components (including blood) are kept within the boundaries of their own systems while nutrients (sugars, fats, minerals, etc) are allowed to pass in, and waste products to pass out, of the embryo’s environment.

This clever system allows young mammals to spend longer in their mother’s womb. They are then born, in most cases, ready to run with their parents after only a few hours or days of life.

There is however much variation between different mammals. For instance, herbivores are generally more capable of standing and moving on their own shortly after birth than carnivores.

Even within one order, there are great differences.

Once born, young mammals are fed on milk and protected by one or more of their parents until they are able to fend for themselves. In the more social mammals, the young may then become part of the parents’ group.

There is much variation within this simple plan, but these particulars will be discussed in the individual pages for the various families.

In most mammals, fertilisation of the ovum (egg) takes place high in the fallopian tubes.

The initial cell division occurs as the fertilised egg travels down the fallopian tubes. The egg becomes a ball of cells called a ‘morula’. This morula separates into an inner cell mass and an outer layer of cells. At this stage it is called a blastula.

The outer layer of cells is eventually called the chorion and the inner cell mass the zygote. While it travels down the fallopian tube, the developing cell growth is supplied with nutrition from stored food in the egg. But in mammals, this is in short supply and the developing zygote soon needs a new source of nourishment.

Finishing its journey down the fallopian tubes, the Blastula enters the uterine cavity (the inside of the uterus).

Within the uterus, the blastula connects with the endometrium of the uterine wall in a variety of ways, depending on which species of mammal we are looking at.

From this first contact, the placenta grows out of a complex of maternal material and embryonic tissues. There are at least 5 different forms the placenta can take in the different species of placental mammals. Though each species always takes the same form.

The differences involve changes in degree of contact and the number of layers of tissue between the maternal blood supply and the embryo’s. On the maternal side the possible layers are called the Endometrial epithelium, connective tissues and the endothelium of the blood vessels.

On the embryo’s side there is also the endothelium of the blood vessels, the mesenchymal tissues and the chorion. The differences are related to the different lifestyles of the various mammal species.

How Many Offspring Do Different Mammals Have?

I think that is probably enough science for now… I hope you have found introduction to reproduction in mammals interesting!

You may also want to check out how long do animals live.