Home
birds
19 Pengiun Species Examined: The World Of The Spheniscidae
Help us spread the word...
TwitterFacebookPinterest

Penguins are, however, unusual birds. They walk upright, do not fly and have tidy plumage that makes it easy to believe that they are dressed in a suit.

They are much loved across the world now that TV and advertising has brought them to the attention of millions. They are used these days to sell chocolate biscuits, wool and of course books. They are up in the top ten of animal favourites in most zoos.

Although now among the most popular of birds, they are relatively new to us in the northern hemisphere.

It was not until the 15th century that sailors venturing into southern waters discovered penguins. These first penguin/mankind interactions were pretty brutal. Sailors regarded penguins – who were perhaps the only birds they had ever seen which showed no fear of man – as a source of easy food.

All you had to do was walk into a colony and club them to death.

Later they were killed not just for food, but to be boiled down for oil.

Fortunately, no penguin species were driven to extinction by this process. Now that we as a species have learned more respect for the world around us, we are free to admire their sometimes comical but always amazing existence.

Having said this, it is unfortunate that oil spills in South Africa and farming in South America, as well as farming and a collection of introduced predators in New Zealand, are threatening to do what our ancestors failed to achieve.

Yellow-eyed, Jackass, Humboldt’s and Little penguins are all suffering declining populations, so there is no place for complacency.

There are 17 species of penguin, all of which have a southerly distribution ranging from the Antarctic itself to the Galapagos Islands.

Only two species, the Emperor Penguin and Adelie, have entirely Antarctic distributions. 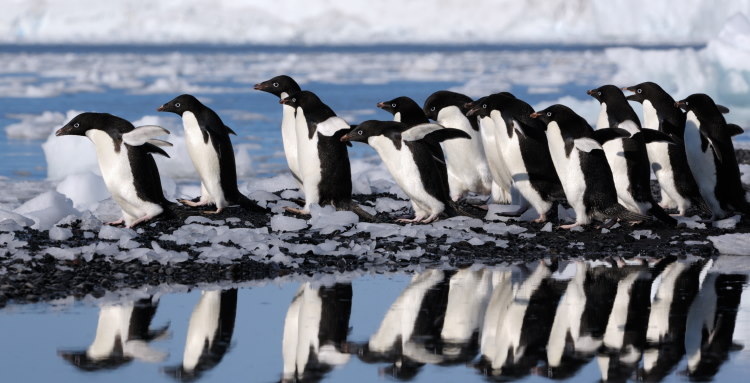 Group of Adelie Penguins going to the water

The rest live more northerly lives to varying degrees, 5 species being sub-antarctic, 6 southern temperate and 4 sub-tropical. Though one species, the Galapagos Penguin (currently the rarest penguin species), lives in the equatorial band, it is protected to some extent form the heat by the cold Antarctic currents which bath the islands.

No species has crossed the warm tropical waters to colonise the northern hemisphere.

Penguins are highly adapted to marine life and some species spend up to 80% of their life at sea.

Europeans have on several occasions attempted to introduce Penguins of various species to the northern hemisphere. Although some of the introduced specimens survived for a number of years, none were observed to breed. Breeding for a number of species of penguin has been achieved successfully in zoos however.

Penguins, as I have already said, are unusual birds. They do not fly and walk only slowly – though they can outdistance a running man while tobogganing on their bellies.

Penguins look awkward, even comical, on land. They are however elegant when in the sea. 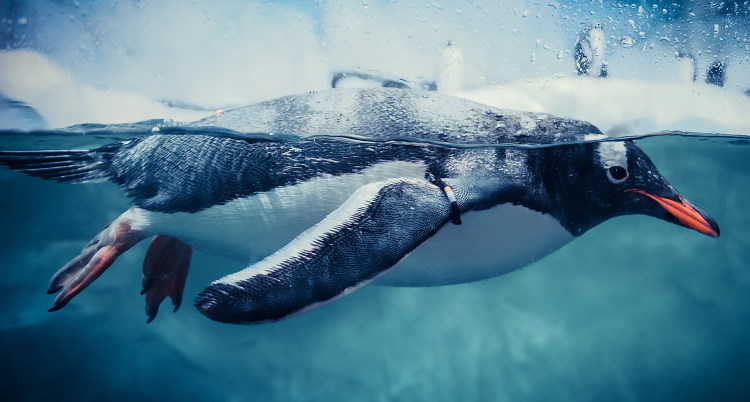 They are excellent swimmers, using their strengthened and modified wings to fly through the water. Their whole bodies are designed to make them a success in their chosen environment. Propelled by their wings and steering by their feet, Penguins can reach speeds of up to 10 knots (13 miles per hour).

Penguins have clearly evolved to live in the freezing southern waters.

Needless to say, for an animal that collects all its food below the surface of the sea, Penguins are excellent divers.

The Emperor Pengiun is the record holder for both dive duration (32 minutes) and dive depth (534m, 1751ft). The King Penguin comes in second with recorded dives of 240m (783ft).

However dives like this are exceptional, normally penguins dive much more shallowly and far less deeply. A survey reported in 1995 by the scientists TG and GL Kooyman indicate that on average Emperor Penguins dive to depths of between 25 and 40 metres and for times of 4 to 5 minutes.

Many Penguins live in cold environments, under extreme conditions.

Male Emperor Penguins can endure temperatures below -20 degrees C for several months without food, while incubating their single egg during the Antarctic winter. To achieve this remarkable feat they obviously have had to evolve some special adaptations.

Penguins first layer of defence is the ubiquitous and remarkably efficient feather.

Penguin feathers are short and stiff with a turn down at the tip. They all have a conspicuous aftershaft which is very downy in structure. Thus their feathers, when close packed (and Emperor Penguins have 12 per square centimetre) form a double layer of protection, incorporating a layer of highly insulating air between them. 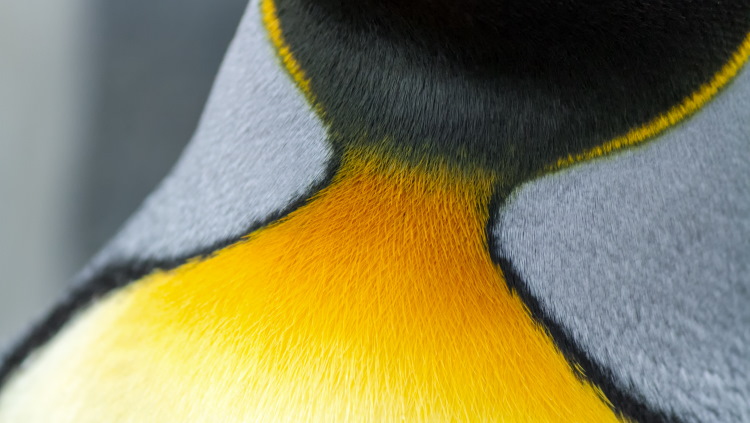 This feather barrier supplies 84% of a Penguin’s thermal insulation. A Penguin’s second layer of defence is a thick layer of blubber immediately beneath the skin. Blubber is basically fatty oils and is a bad conductor of heat as well as a valuable store of energy.

During the breeding season, some of the more southerly Penguins may be as much as 32% blubber by weight. This blubber is invaluable in saving Penguin lives, but in the world of mankind it has also resulted in thousands and thousands of them being slaughtered for their oil.

Penguin’s thermal insulation is so efficient that penguins living on the ice shelves of the Antarctic overheat if they spend too long in the sea. Water freezes at 0 degrees C, if it is liquid it must be warmer than this (usually about 4 degrees C).

This can be much warmer than the surrounding air, which gets as low as -10 degrees C near the sea.

So penguins standing around on the ice are not just enjoying the scenery, many of them are actually cooling down before getting back into much warmer sea to look for food!

Not all Penguins however live in the frozen wastes of the Antarctic, Coastal Africa, South America, New Zealand and Australia. A number of Southern Pacific and Atlantic Islands, up to and including the Galapagos, are also home to Penguins. 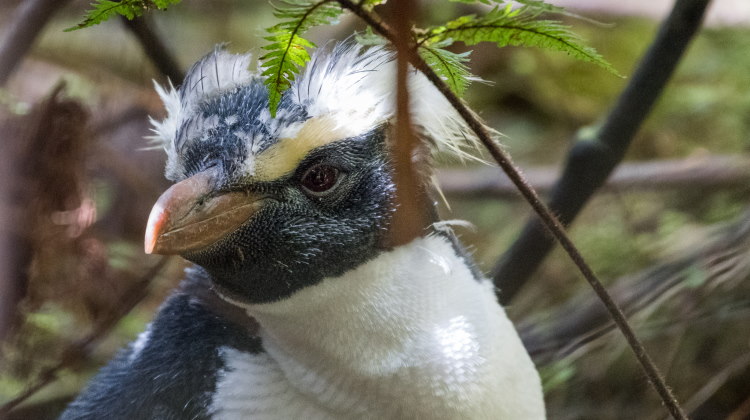 Needless to say, many of these habitats are considerably warmer than mainland Antarctica. In the more northerly ones, this excellent insulation that protects more southerly living species, can become a problem – causing overheating.

Penguins respond to overheating in several ways, all of which are designed to increase heat loss.

Firstly, Penguins in warmer climes have no feathers on their feet and sometimes bare skin on parts of the face. This increased bare skin allows for heat to be radiated away from the body easily.

Secondly, they change the way the blood flows around their bodies. Pumping more into the veins and arteries immediately below the skin helps keep body heat moving from the centre of the body – where it is being generated, metabolically – to the surface, where it can be lost.

Thirdly, they change their stance. By holding their flippers out, their legs further apart and their toes up, penguins can increase their relative surface area – and thus the area available to radiate heat away from the body.

Fourthly, they can lift their feathers up. This means that instead of lying one on top of another they stand out from the skin, letting the ambient air move over the body.

Finally, larger bodies lose heat more slowly than small ones. The most northerly Penguins, though not the smallest, are generally smaller than the most Southerly species.

Penguins hunt for their food in the seas and oceans of the Southern Hemisphere.

They consume considerable amounts of fish, krill and squid, though nowhere near as much as we humans do (and we do not even live in the sea). The amount of time penguins spend at sea foraging depends on the time of year. Some species of penguin are prone to longer trips, with Emperor Penguins spending 60 to 70 days at sea at a time. While Gentoo Penguins make foraging trips of only 4 to 12 hours during the breeding season.

Penguins are monogamous and breed in a diverse variety of habitats, ranging from the frozen wastes of the Antarctic to the scorching larva flows of the Galapagos Islands. Most Penguins congregate in large dense colonies to nest (except Yellow-eyed and Fiordland Penguins).

These colonies range in size from 200 to 300 birds for Gentoo Penguins, through to 600,000 or more birds in Chinstrap, King and Macaroni Penguins.

A colony of Emperor penguins (aptenodytes forsteri) in the southern ocean

Most species nest on the surface with simple unlined nests though some will nest in burrows and or caves (see species reports below).

Most species of Penguin lay two eggs, the exceptions to this being the two larger species Emperor Penguins and King which both lay only one egg.

Both parents play an active role in incubating the egg and raising the young. Though in Emperor Penguins, the male does all the incubating and the female all the caring before creching.

Young Penguins aggregate in creches after a certain period of time. This frees both parents to go foraging to feed the hungry young and prevents them from getting lost on their own. It also helps protect them against predators.

The primary predators of eggs and chicks are Skuas (Catharacta spp.) and Gulls (Larus spp.) for most species of Penguins – except the Emperors which have to deal with Giant Petrels (Macronectes spp.) instead.

However since the coming of human beings, introduced predators such as Dogs, Cats, Pigs, Stoats, Ferrets and Rats have become increasingly more important as predators. 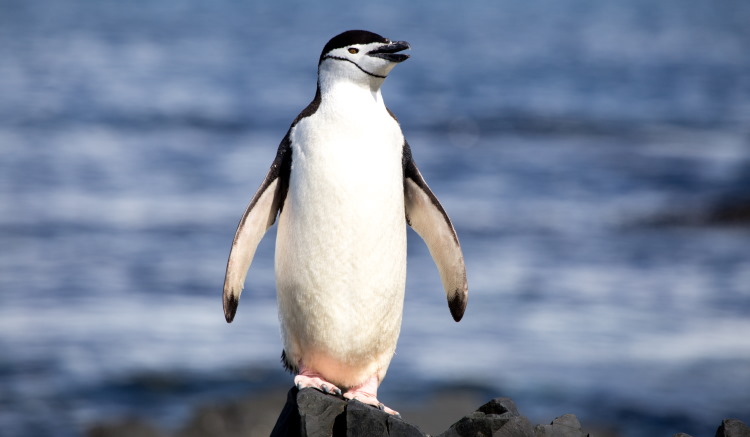 Often these predators will be waiting in the sea near nesting colonies to prey on adults coming to and from foraging trips… and on young birds entering the sea for the first time.

Penguin behaviour has been intensively studied over the last few decades and quite a bit is know about it now.

17 species of penguin of the family Spheniscidae are all laid out in the below table.

Note that an additional 2 species have been recently identified (making 19 in total). These have not yet been added to the list.

Maybe now you’d be interested to learn a bit more about the wonderful world of the albatrosses?