Pycnogonida (Sea Spiders) are odd looking creatures, which live in the seas and oceans of the world and normally have 4 pairs of walking legs – but they may have 5 or even 6 pairs in some cases.

They have practically no body and a proboscis. There have been relatively little studies and there is a great deal we still do not know about them.

The fossil record of pycnogonida is very meager. Paleopantopus maucheri,  an early Devonion fossil is one of the few well documented species. Despite this lack of hard evidence, scientists deduce from morphological and embryonic studies that the Pycnogonids are an old lineage of animals – though nobody can really put a date on their first appearance.

Pycnogonida are found all over the world, from coastal tropical waters to the poles. They are also found at depths as great as 7,000 metres deep, though they are far more common in shallower waters.

They range in size from a few millimetres of leg-span, to giants with a legspan of 75 centimetres (2.8 ft). As of the late 1990s, there were about 1,348 species known to science divided into 8 families and 86 genera. They are common in the Mediterranean, the Carribean and around the poles, and not that difficult to find in rock pools once you get your eye in.

The typical pycnogonid looks like an emaciated (under fed) spider, walking backwards – which is why they are called Sea Spiders.

Their body is greatly reduced until it has become little more than a place for the legs to be attached. There are normally 4 pairs of walking legs, but a number of species, or subspecies have 5 pairs (Pentacollosendeis reticulata, Pentapycnon charcoti) and one species with 6 pairs (Dodecalopoda sp.). 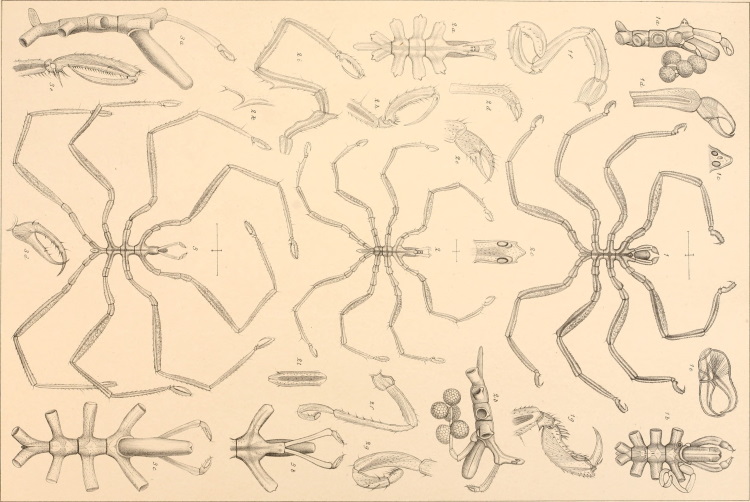 The relative size of the legs of various species ranges between about equal to the animal’s body length, to about 7 times the animals body length. The body is composed of two sections, a cephalothorax and an abdomen. The abdomen is very small, much smaller than the cephalothorax or the proboscis.

It is the large size of the proboscis, in comparison with the small abdomen, that gives these animals the appearance of walking backwards.

On the dorsal (top or back) side of the cephalothorax, there is an eye turret called an ocular tubercle. This normally supports 4 simple eyes which give the animal good all around light detection. The cuticle of Pycnogonids also contains many other pits and hairs, which act as tactile and chemosensory sense organs – although little is currently known of their function. 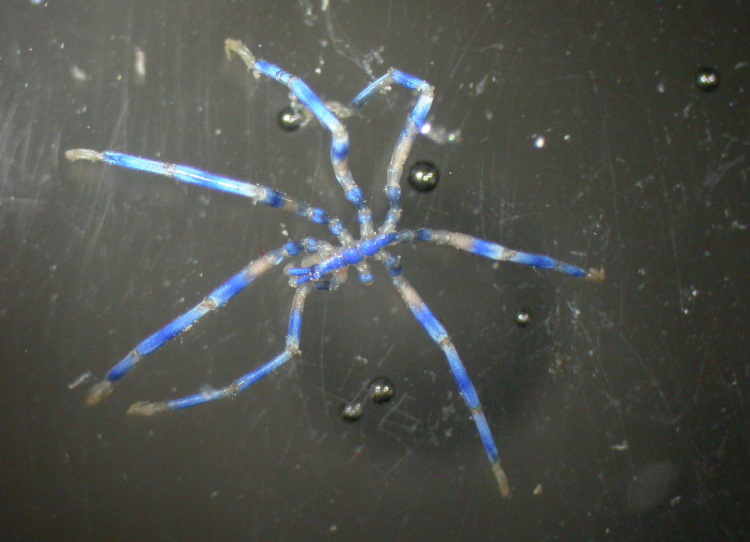 The proboscis is unique among the Chelicerates, and though all Pycnogonida have a proboscis, its shape and size is variable between species. The degree to which the proboscis can be moved is also variable, but generally it has a very restricted range of dorso-ventral (up and down) movement – and even less lateral (sideways) movement.

The proboscis is used to mix digestive enzymes into the food and to suck up food into the gut.

The anterior (head) end of the body bears two pairs of non-walking appendages, as well as the proboscis. These are the Chelifores and behind them the Palps. Both of these may be absent as in the families Pycnogonidae and Endeidae. In the Endeidae, the chelifores are present in the juvenile stages but absent in the adults.

Or the chelifores may be present and the Palps missing as in the family Phoxichilidiidae. When the chelifores are present they usually, but not always, have chelae (singular chela) at their distal (furthest from the body) end. These chela are like the claws of Scorpions and Crabs. 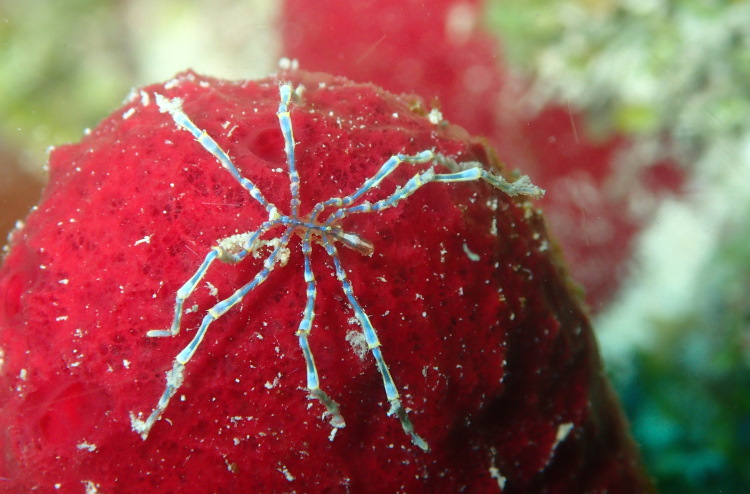 Species that have no chelae are called ‘achelate’. Chelifores are short appendages; with only one or two segments before the chela; these preceding segments are called the ‘scape’. Chelae vary in shape and size between species and may have teeth on their inner surfaces.

The chelae can be used to grasp the body of a prey animal during feeding, to tear the food and to hold it against the mouth.

Palps, when they are present, are generally longer than the chelifores; normally consisting of 5 to 10 segments – though Nymphonella tapetis has 20 segments in its. How Sea Spiders use their palps is not fully understood, but they are believed to have sensory equipment at their tips – and in some cases are used to help the animal align the proboscis.

Unique to the Pycnogonida are the ovigerous legs. These are found, in those species that have them, below the palpa, and a little way back between them and the first walking legs. In many species, they are only present on the males, but in some genera such as Pycnogonum the females carry them also.

They are between 5 and 10 segments long, often with a claw at the distal end. In females, and outside the breeding season, they are used for grooming and cleaning the animal’s carapace. However during the breeding season, the males first use them in their courtship of the females – and then to carry the eggs around until they hatch.

The remaining appendages are the walking legs, sometimes called ambulatory legs. They consist of 3 coxae, a femur, two tibia, a tarsus, a propodus and a claw. The legs include within their interior space, not only the muscles and nerves that allow them to move, but also extensions of the gut and of the reproductive organs. This is necessary because the body, particularly the abdomen, has become too small to house these organs on its own any more.

Internally there are no gaseous exchange organs, or organs for the removal of metabolic wastes. Their generally small size and long thin legs give the animal sufficient ‘body surface-area to volume ratio’ to supply all its respiratory needs. Many metabolic wastes are lost through the digestive tract. Others are stored in vacuoles in the cuticle and lost during the moult. 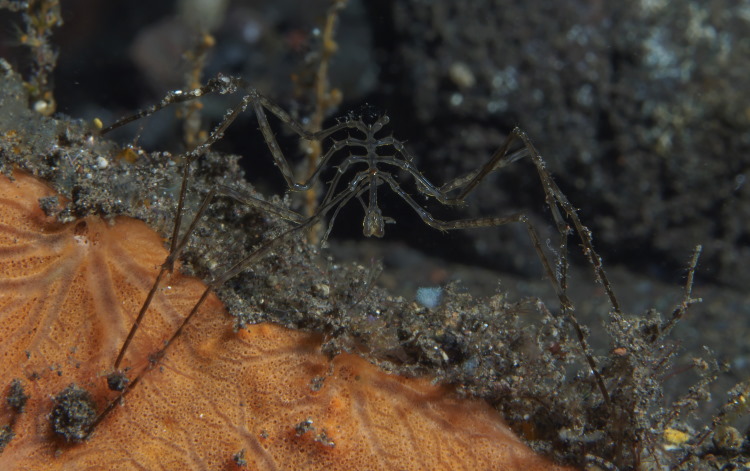 Digestion is interesting and novel in the Sea Spiders. The food is partially externally digested in most case and is generally in the form of fine particulate matter, by the time it reaches the guts. Mucous cells lining the midgut absorb food particles and then, when they are full, they become detached and wander around in the haemolymph. They may later reattach to the gut wall, for a short period of time – but eventually they lost with the faeces.

Pycnogonids have no coelom, though it is believed they are derived from animals which possessed one-  and that it has been lost secondarily through evolution.

Internally, their body contains a colourless fluid or plasma containing several sorts of corpuscles and containing nutrients. It is moved around the body by the beating of a long thin heart which rests above the gonads and the alimentary canal. There are no blood vesels and this sort of system is called an ‘open circulatory system’.

The nervous system consists of a supra-oesophagal mass or brain and a pair of ganglionated ventral never cords. From these, individual nerves arise which supply which supply the rest of the body.

Pycnogonida are gonochoristic, meaning they have two distinct and separate sexes. However as Nature loves to have exceptions there is one species Aschorhynchus corderoi which is a hermaphrodite, meaning each individual is both male and female.

The reproductive organs consist of either a pair of ovaries or a pair of testis and they are found lying above the digestive tract. Like the digestive tract, they extend into the legs cavities at least as far as the femur. In most species the ova (eggs) only ripen in the legs and the genital openings are therefore on the legs, generally on the 2nd coxae.

Although some of the longer legged species of Sea Spider such as Anoplodactylus, Pallene and Nymphon can swim well and do so regularly, most species are slow moving and live on the colonies of the animals that are their prey. 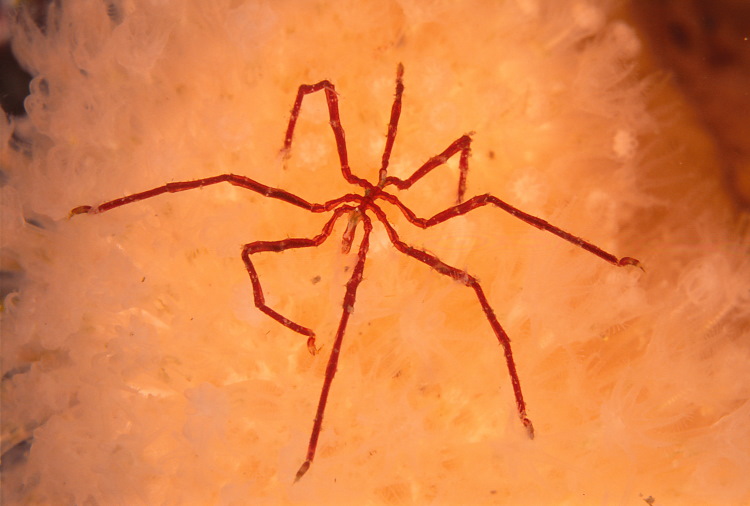 Most Pycnogonids are carnivorous, preying on bryozoans, hydroids and sedentary polychaetes. However, some species such as Achelia longipes feed on the new shoots of red algae that grow on the polyzoan colonies; and a few other species, such as Endeis laevis, feed on the detritus that collects around the bases of these colonies.

Scientists have learned that adult Pycnogonida have taste preferences for a particular type of prey that develop, depending on what they are fed on while they are juveniles. In other words, they like eating what they learned was good when they were young.

Reproduction involves a brief courtship, but very little is known about the secret lives of most Pycnogonida.

The female releases her eggs and the male releases his sperm into the water over them. The male then collects the fertilised eggs into a ball, on one or both of his ovigerous legs.

Male Sea Spiders often mate with more than one female and a male of Phoxichilidium femoratum has been observed with 14 egg masses. Indicating his involvement in 14 matings, as the female of this species releases all her eggs at one time.

The male carries the eggs around with him, either until they hatch, or in a few cases until they have moulted several times. In this latter case, the females produce eggs with a lot of yolk and the young live off this even after hatching. In the former, the young are a free swimming nauplius-like larvae which feeds on the same food items as the adults and slowly grows gaining more segements as it matures.

Well, I hope this has been an interesting glimpse into the world of the Sea Spiders!

Perhaps next you’d like to learn a little more about their cousins in order Uropygi.