Home
fish
What Do Fish Eat? From Piscivores To Plankton & Everything Else
Help us spread the word...
TwitterFacebookPinterest

What Do Fish Eat?

So what do fish actually eat?

And somewhere, at sometime, everything that lives in the waters of the world – that is larger than a single bacterium – is eaten by fish.

But they also eat things that don’t live in the water – such as plant material, insects and other animals that fall into the water for one reason or another.

Note that these words apply to all animals, not just to fish. However, terrestrial detritivores feed off the floor of the forest or grassland and not off the sea floor.

Types Of Diet In Fish

Of Piscivores And Plankton Eaters

Some more important words, when considering what fish eat, are:

Phytoplankton comprises most of the plant material in the oceans and occurs in staggering quantities. It is the basis of the oceanic food web.

Scientists have shown that there is a fundamental relationship between the presence of phytoplankton and catches of commercially viable fish. Basically, more phytoplankton means more zooplankton – which after one or two more steps equates with more fish. 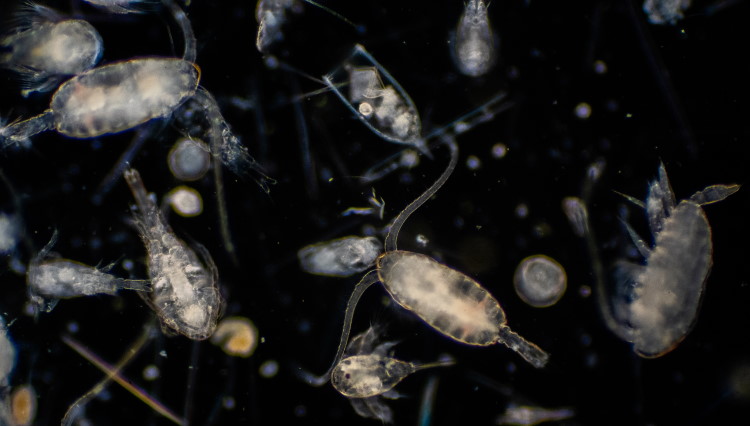 Marine zooplankton floating in the ocean

Scientists have also shown that damming a river can drastically reduce the phytoplankton populations of the sea, or part of the ocean it flows into. This is because damming the river allows a lot of the dissolved organic salts to accumulate in the sediment of the dam, instead of flowing out into the sea (Karpevich, 1958 – In “The Ecology of Fishes” by G. V. Nikolsky).

As you can see by the date of the authority, this knowledge has been around a long time. Yet despite this, and a mass of other negative evidence, mankind is still busy damming the world’s rivers.

The vast majority of fish are euryphagus carnivores feeding on insects (fresh water species), crustaceans (particularly copepods and shrimp species but also crabs) and molluscs (squid, octopus etc.) as well as on other fish.

A specimen caught off south Australia was reported to have the skeleton of a horse in its stomach. Equally unusual is the report of a Greenland Shark, Somniosus microcephalus, with a hornless reindeer in its stomach (sharks often swallow their prey whole).

What Do Detritivore Fish Really Eat?

When considering the diet of fishes, we we need to think a little. The term detritivore for instance is not nearly as simple as it seems. In reality it is a rather a feeding method than a feeding type.

Such fish suck in the accumulated detritus of the sea floor – and with it some of the sea floor as well. When digesting the food, they do not select out the animal or plant aspects separately but consume any organic matter they find.

In this way they are usually feeding on not only a mixture of dead plant and animal matter, but also consume any of the small organisms that live on and in the sea floor and a variety of micro-organisms. Thus a detritivore is also likely to be a euryphagus omnivore.

Detrital feeding is much more common in fresh waters than it is in marine environments. In the Grand Lac of Cambodia an analysis of the commercially caught species showed that of the 56 species involved, 25% were detritivores.

In marine environments Grey Mullet is a good example of a detritivore.

The length of the gut (see fish digestive system) of a species of fish, or any other animal, reflects its diet.

Plant material is often very abundant – and easy to acquire – but it is harder to digest, because of the cellulose content. It also supplies less energy per gram.

Meat is harder to acquire and often requires chasing or subduing even after it has been found. But it is more easily digestible than plant material and gives a better energy pay out per gram.

So carnivores have shorter guts than herbivores. This is so that they will have a greater surface area over which nutrients can be absorbed. It allows them to keep the food in the gut for a longer period of time allowing micro-organisms more time to work on it.

This relationship between diet and gut length is eloquently shown by a study published in 1995 by Kramer and Bryant on the relationship of a fish’s body length to the length of its gut, using 21 species of fish from Panama.

In the Chondrichthyes and some ancient fish, such as the Sturgeon and Lungfish, the internal surface area of the gut is increased by the possession of a spiral valve within the intestines. Imagine a corkscrew running along the centre of the intestines.

Young Pike, Esox lucius, feed primarily on planktonic crustaceans, but as they grow larger they change over to fish. If they are not offered any fish, they stop growing and die. 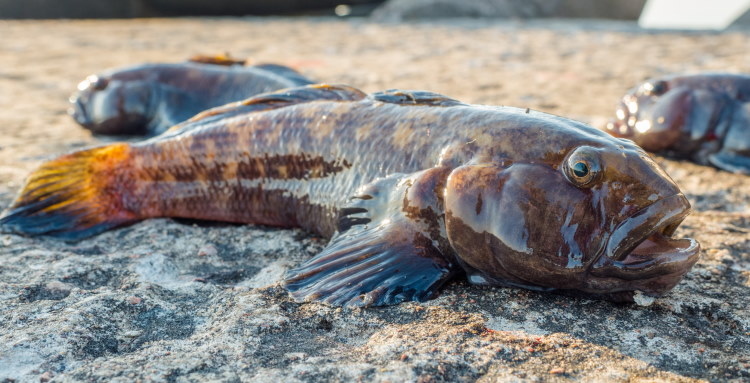 The diet of the Monkey Goby, Neogobius fluviatilis pallasi, an important commercial species of the Caspian Sea, changes over time as well. When young, they feed on both Mysids and Amphipods (these are both groups of Crustaceans) however as they grow older they eat less and less Mysids, until as full grown adults they feed entirely on Amphipods.

This is just an example from a study done in the 1930s. While it illustrates a general principle quite well, we must remember that many other factors such as level of competition and relative abundance (which will change with the seasons and with time of year) also effect the predators choice of prey.

Furthermore, not only do fish feed on different items of food as they grow, but some species even change their feeding category. Thus Yellowfin Xenocypris macrolepis, which is mentioned above as a detritivore is an active carnivore in its juvenile stages.

Ten amino acids are essential to fish, meaning there are ten amino acids they must take in as a part of their diet because they cannot synthesize them themselves.

The amino-acids which are essential for fish are (the last 8 of these are also essential amino acids for human beings):

Well, I hope this has helped to answer the question “What do fish eat?”.

Perhaps now you’d like to learn more about electric fish.