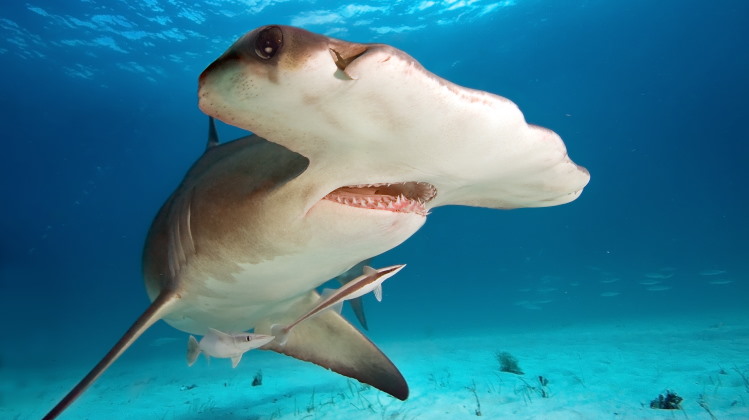 Looking at a selection of jaws from different species of predatory fish, it becomes obvious that they eat many different things (see what do fish eat).

This is because a fish’s jaws reflect its feeding mode.

Long, thin jaws like a Pipefish will be useful for sucking in individual small items. Huge, gaping wide mouths like the Whale Shark are good at scooping up millions of small creatures at one time. Jaws with lots of thin sharp teeth – like the Pike – are good for catching fish. Whilst the projecting, flat bony plates of a Parrotfish are good for crushing hard corals.

In fact, a fish’s jaws can tell us not only about what it eats, but how it captures its food as well.

Because fish, as a group, are so diverse it should not be surprising that their is a vast amount of variation within them. Many fish, as anglers know, have daily rhythms or feeding cycles. Thus different species will feed during the day or the night, at dusk or at dawn, or maybe both, the latter but not at other times.

Other species may have their feeding times dictated by the ebb and flow of the tide. Those who catch their prey by sitting and waiting, will be dependent on the activity rhythms of that prey.

Because vegetation is generally less nutritious that flesh, herbivores often have to spend more time feeding than carnivores. Also as carnivores grow larger they need to feed less often (this applies to mammals and reptiles as well).

Most predatory fish feed on items smaller than themselves and have the ability to suck food into their mouths (along with a mass of water of course). However the water is soon expelled through the gills, while the food item is swallowed.

Many species of fish, however, show morphological adaptations that facilitate their mode of feeding.

Thus, fish which feed from the sea floor often have their mouths positioned ventrally (on the underside of the head). Those which feed in the water column have a purely terminal mouth. And those which feed on items on or near the water surface – and thus above – them have a dorsally placed mouth.

These are obviously only general rules, many sharks that feed in the water column have a ventral mouth.

Fish species that feed off the substrate (lake/sea/river/ocean floor) often have sets of fleshy protrusions called barbels around their mouths. which help them feel for the food in the mud.

Many herbivorous species scrape layers off vegetation, or vegetation off rocks – rather than biting it. Species that feed off crabs and molluscs must have strong jaws, to allow them to crush their prey. Species like some Sharks, Lungfish and Piranhas – that take bites out of larger organisms – are quite rare.

Piscivorous (fish eating) species that actively hunt their prey, often have longish jaws with many sharp teeth. Species that catch their prey by stealth often have very large wide mouths, designed to allow them to make the most of whatever opportunities come their way.

Fish that feed on other smaller fish often catch their prey side-on first, squeeze them, then eject them from the mouth and quickly catch them again head-first, in order to swallow them!

As a general rule, those species which feed on organisms that are highly aggregated, such as plankton, squid or smaller schooling fish, themselves travel in schools (e.g., sardines, Herrings Cod, Tuna etc.).

Parasitism is rare in fish. Some people consider the Hagfish and some members of the Simenchelidae (which catch onto another fish with their mouths and slowly eat their way into the other fish’s body, then eating the fish’s insides) a parasite, because it does not kill its prey immediately. But others consider it to be just a slow predator.

An example of true fish parasite is the 4 cm long Stegophilus insidious, a small South American fish that lives in the gill cavities of the much larger (50cm) Sorubim lima and feeds by sucking its blood.

The family Trichomycteridae, often called Pencil, or Parasitic Catfish, contains between 35 and 45 genera and over 150 species – a number of which are parasitic in a similar mode.

The species Vandellia cirrhosa is renowned for occasionally mistaking the urethra of a bathing human for the gill cavity of its normal host. Where, because of its spines, it causes intense pain.

The parasitism of Sea cucumbers by members of the Pearlfish family (Carapidae) is also well documented. The small thin fish enter the Sea cucumber’s body via the anus, and then penetrates the body cavity and feeds on the host’s gonads.

Many deep sea fish have large extensible mouths, jaws and highly extensible stomachs, allowing them to consume items as large – or in some cases even larger than – themselves. See fish mouths for more information.

This is an adaptation to living in an environment where prey items are very scarce and every opportunity to eat needs to be taken full advantage of.

Most species of teleosts, particularly shoaling fish, however locate their prey visually.

Finally, large shoals of fish can decimate dense populations of plankton before moving on. Therefore the density of planktonic food, at any particular part of the sea or ocean, is constantly variable depending on water temperature, nutrient availability and recent predation rates.

Nevertheless these plankton are the basis of most of the marine food webs. Shoals of small fish such as Sardines, Pilchards and Menhaden scour the seas sweeping up huge amounts of planktonic food every day. These huge aggregations of fish are in turn fed on by larger fish, and then by larger fish still.

Shoaling is an effective strategy for finding aggregated prey, when the prey aggregations are greater than the immediate need of the shoal. Also because, whenever one fish finds the edges of a prey aggregation, all the shoal finds it and can turn to focus on it.

An individual fish would find it impossible to search such a vast area effectively. However the shoals often don’t feed during the night, because the fish that comprise them are primarily visual hunters. In some species such as Herring, the shoal breaks up each night and is reformed again in the morning.

Shoaling of course also occurs in fresh water species. In Lake Tanganyika, the following food chain can be observed.

Ecologists have known for many years that each step on such a ladder is normally at the power of ten. Thus is takes ten kilos of phytoplankton to produce 1 kilo of zooplankton, and so on… The math looks like this:

1 kilo of Tanganyika Lates for a man to eat, used up 10 kilos of Sleek Lates, which used up 100 kilos of Dagaa, which consumed 1,000 kilos of zooplankton which in turn ate 10,000 kilos of phytoplankton.

However, it doesn’t hurt to keep the predator numbers down a bit too. The situation is complicated.

The best answer, if it were possible, would be to continually monitor fish stocks and to take from the sea a balance of species – in numbers that did not threaten the stability of the oceans fauna. Rather than the present system – which is geared to maximising the human fisherman’s individual income – and has no real scientific basis in knowledge or support at all.

By the same token as the above, feeding animals (such as cows) on fish meal is an ecological crime of immense proportions. It takes 10 kilos of fish to make every kilo of beef (in this world, so full of hungry people, corn fed beef is also a crime).

It would be much better for us to be less greedy and let the cattle eat grass, it is what they were born to do.

Well, I hope this has taught you a little about predatory fish and how they prey.

Perhaps now you’d like to learn about magnetism in fish.