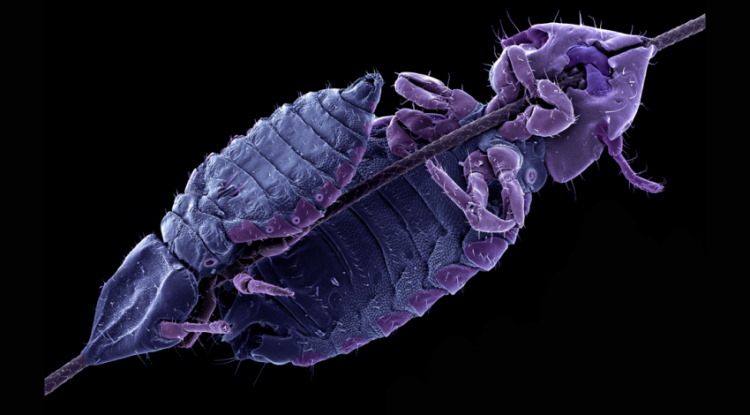 A Word on Taxonomy

The modern taxonomy of the mallophaga is under serious revision. There is considerable argument to suggest that the Sucking Lice (Anoplura) and the Biting Lice (Mallophaga) are part of a single order, the ‘Phthiraptera’. Furthermore there are also arguments that all the Phthiraptera should be combined with the Pscoptera in a single order called the Psocodea. Here at Earthlife.Net we are treating the Anoplura as a suborder of the Psocodea.

Whether you view Anoplura and Mallophaga as orders, or suborders is not really important. This is because there will be more changes to terminology in the future.  As long as you know to be careful of them when handling birds and can be amazed at what nature has created it will be OK.

The Mallophaga, also called ‘biting live’ and ‘chewing lice’ are described as wingless (Apterous), hemimetabolous (having a simple metamorphosis i.e. no pupa) ectoparsites.  Meaning they live on the outside of their hosts, which are mostly birds, but also of some mammals. World wide there are about 4,250 species described to date (March 2021). The species that feed on birds are typically distinguished by their having two claws on the end of each tarsus. In comparison those that feed on mammals usually posses just a single claw at the end of the tarsus.

They range in size from 0.5 to 10 mm long, with the largest species being wild bird specialists. dorsoventrally flattened, with reduced compound eyes and no ocelli. The antennae are 3 to 5 segmented and capitate (with a knob on the end) and recessed into the head in the Amblycera, but filiform (thin and linear) in the Ischnocera and may be modified as clasping organs in the male.

The mouthparts of biting lice are designed for biting (hence their name) and they have no cerci, there is some suggestion that they may have evolved from the Psocoptera (Book and Bark Lice).

Most biting lice feed on fragments of hair and feathers, though some such as Menocanthus spp feed on their host’s blood as well. Some have formed a symbiotic relationship with bacteria which live in special Mycetocytes in the insect’s fat reserves. These may help with the digestion of blood, etc., as individuals deprived of their bacteria die in a few days.

The Ecology of Biting Lice

They are often adapted to live on particular parts of their host’s bodies. On Pigeons for instance, Colombicola colombae is found mainly on the remiges (flight feathers) of the wings, while Goniocoles bidentatus tends to be restricted to the feathers around the neck.

Mallophaga can only survive for a maximum of three days after their host has died and may hitch a ride on a passing fly (phoresis) in the hope of reaching a new host. They may also use phoresis in order to spread to a new host even if the present one is still alive.

Females lay up to 100 to 300 eggs of a period of several weeks.  Their eggs are cemented on to the hairs or feathers of the host with a clear fast-drying glue that is secreted by the female immediately before she lays the egg. These eggs are an elongated oval shape and about 1mm long. Mallophaga  eggs take about 3 or 4 days to hatch, though under some conditions they may take longer.  What hatches from the egg looks like a miniature of the adult and is called a nymph.  Nymphs go through 3 larval instars in about 20 days before they reach maturity.

Species number from the Catalogue of Life.