Most Nematocera (except the larger Tipulidae) are small, delicate flies with long, many segmented antennae, long legs and long thin wings.

Many are ancient flies and most families are not as abundant now as they have been in the past.

Nematocera are generally restricted to damp habitats and tend to be easier to find around dusk. The larva have a complete head and horizontally biting mandibles; the pupa are obtect and generally free, pleural suture of mesothorax generally straight.

These are the most important group of flies in suborder Nematocera. The word mosquito is Spanish and means ‘little fly’. Mosquito adults can be recognised because they are the only family of flies which have both the veins of their wings covered in scales (very rare in any flies at all) and a long projecting proboscis.

Flies in general are lovers of the light, but not mosquitoes – most of whom are true denizens of the night.

Mosquitoes have aquatic larva and one species or another will lay its eggs in most areas of still water, from large lakes to puddles and knot holes in trees. 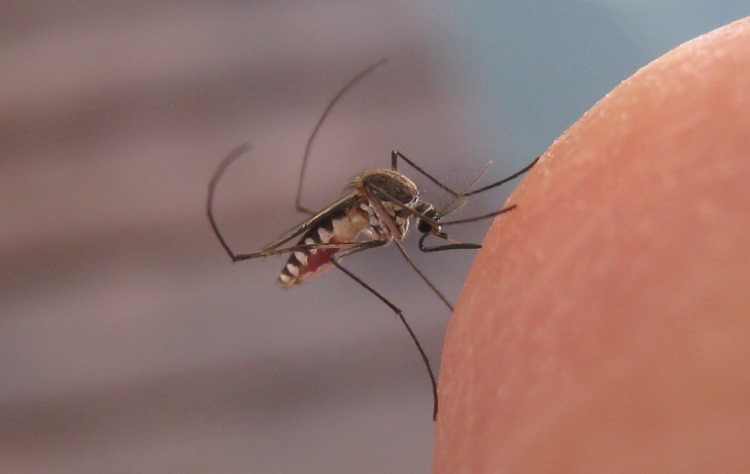 Two very interesting groups are the genus Tripteroides, which lays its eggs in the urns of the Pitcher plants of Indo-Malaya and Australia (despite these being filled with digestive enzymes used by the plant to consume the insects trapped within); and the genus Megarhinus, whose larva are carnivorous and live in the same pitcher urns feeding on the larval Tripteroides.

The strangest place any fly lays its eggs is on its own legs; this is done by the mosquitoes of the genus Armigeres.

The female carefully places each of her eggs onto her legs, where they diapause (a kind of hibernation) until the female immerses her legs in water. The stimulus of the water causes the eggs to fall off their mother’s legs and to come out of diapause – so that they can hatch in the water in the normal way.

Not all species of mosquitoes are blood suckers; and in those species which are it is only the females which do. This is because they need the protein to develop their eggs. One genus of mosquitoes called Harpagomyia have learned how to rob ants of the genus Crematogaster.

The mosquito alights in front of an ant returning to its nest, beating its wings; whereupon the ant opens its jaws, allowing the mosquito to use it proboscis to remove the contents of the ant’s crop.

Note: other Dipteran flies of taxon Cyclorrhapha also treat the poor Crematogaster ants this way! Make sure to check out the whole jaw-dropping ant mugging procedure.

Sound is very important to mosquitos for a number of reasons; one of these is the location of mates. 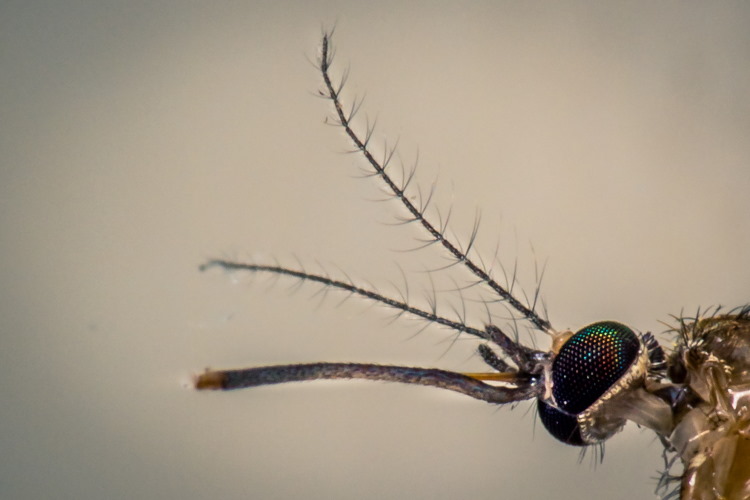 Extreme close up of mosquito antennae

The antennae of male mosquitoes are sensitive to the sounds created by the beating wings of females of the same species. Because females are usually larger than the males, the wings of males and females beat at different frequencies. This makes it possible for males to distinguish females from males based on the sound of the beating wings – and helps in the detection of females of the right species

Mosquito are best known for their role in the transmission of diseases: among the the more dangerous ones are Malaria, Yellow Fever and Dengue fever.

They also carry various encephalitis viruses and filarial worms. Of these, Malaria, is by far the most important. According to the World Health Organization, more than 500 million people are infected with the disease each year and more than 2 million – mostly children living in Sub-Saharan Africa – die of it.”

The Mycetophilidae and Sciaridae are small, inoffensive and delicate little flies which – though found all over the world in basically terrestrial habitats – have mostly been recorded from temperate zones. The larva feed predominantly on dead and rotting vegetation, though some prefer fresh fungi. Hence the Mycete in Mycetophilidae and are often called Fungus gnats.

The larvae of many species are capable of spinning a delicate web of silk from special labial glands in their heads; which generally are used to help them move about.

The best known and most unusual of these are the ‘Glow Worms’ of the famous ‘Glow Worm Cave’ at Waitomo in New Zealand. These are really the larvae of Arachnocampa luminosa, which hang from the ceiling of the cave and use their light to attract the Chironomids which breed in the caves. 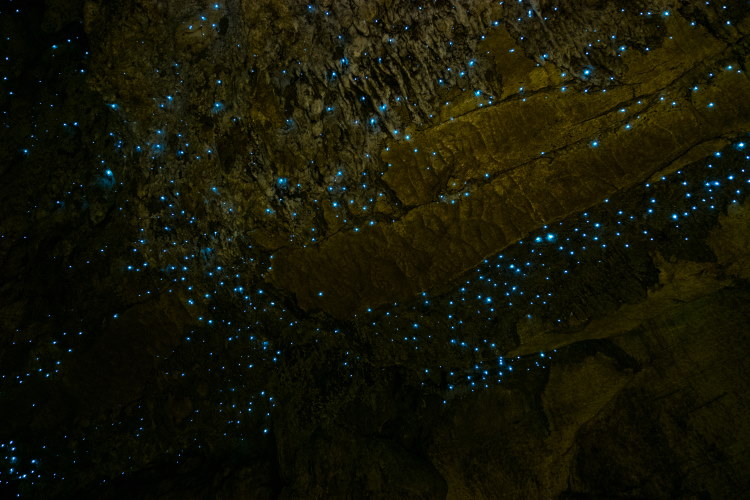 They then become tangled in the pendulous sticky threads of silk let down by the larvae.

Harold Oldroyd reports on a Sciara sp. breeding in the fire resistant lining of a safe (which had become damp) in an air conditioned office in London – surely a highly unusually and rich breeding ground!

The Bibionidae are far larger and more robust than their cousins. They are generally black with a prominent shiny thorax.

Two commonly seen species are the St. Marks Fly Bibio marci, which often appears as a rather inept flyer in April (around St Marks Day, April 24) in Europe; and the smaller and sometimes incredibly common Fever Fly Dilophus febrilus, which though it occurs from March to October can swarm in huge numbers around flowering Cherry Trees in the spring.

In the USA, the equivalent of St Mark’s Fly is Bibio albipennis the ‘Love Bugs’ or ‘March Flies’ which often appear in large numbers in the Spring. They remain paired for a long time and fly around while mating. 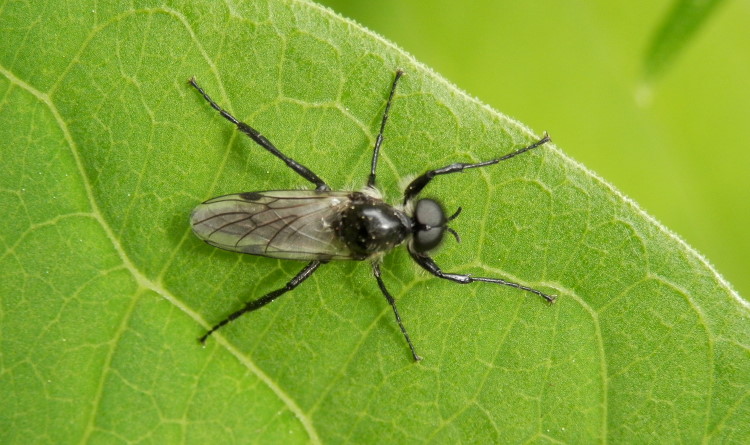 Their eggs are typically laid in the soil, where the maggots will feed on decaying vegetation or roots. They are part of the “decomposer” fauna, as are most Bibionids, and are responsible for biodegradation and natural “recycling” of organic materials (see Soil Ecology).

The adults feed on nectar at flowers and are relatively short lived. In general, therefore, they should probably be considered beneficial.

Water Midges (Chironomidae and others).

The way you have all probably seen these little flies is in the late Spring and early Summer, swarming during the evening over the edges of ponds and streams.

The males gather in these swarms ,where they fly round and around for hours waiting for a female to arrive. When a female arrives, she flies in with the males until she finds one she likes and the pair then the pair go off to the bushes to mate.

These midge swarms can be enormous and Charoborus edulis swarms in millions in and around lakes in Africa, where the natives collect them and press the bodies together to form a sort of bread called Kungu cake which they eat. 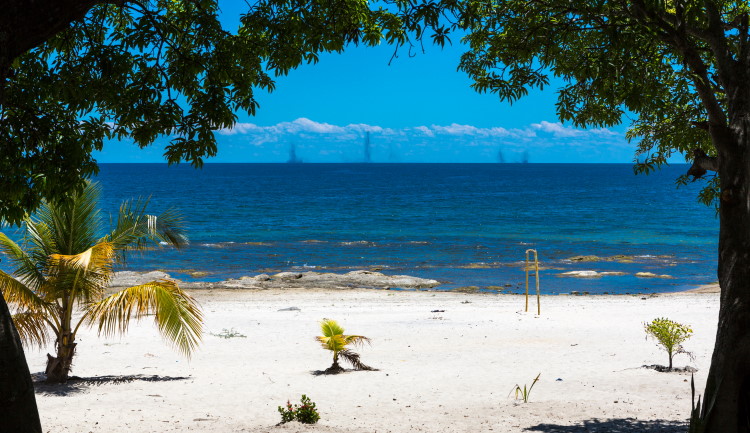 Chironomid midges are not all that small (as flies go), but after drying it can still take more than half a million to weigh one ounce, i.e. Tarytarsis lewisi.

Though most Chironomids go in for two sexes, some practice parthenogenesis (females laying eggs which produce other females, there are no males); and in some species, i.e. Chironomus grimoni and a few others, the females can lay her eggs before leaving her pupal case.

Many water-midges don’t feed at all in the adult stage. Flies of the family Ceratopogonidae (which are very small flies, 1-3mm long in general) are notorious suckers of blood and are often known as ‘no-see-ums’ in the USA.

Not all drink human, or even mammal, blood. Some satisfy their needs by holding onto the wings of larger insects, such as lacewings, and piercing a wing vein in order to drink the fluids flowing there. While Culicoides anopheles feeds on mosquitoes, piercing their abdomens and robbing them of some of the blood they have just stolen from someone else like you or me.

Many of the Simuliidae (Black Fly) are small compact flies, with a bad name for biting, “stabbing and sucking”. They are commonly known as buffalo-gnats and turkey-gnats, as well as black flies.

Many of them transmit diseases to the animals they feed on. The females bite to suck blood to mature their eggs. Sometimes this can be serious or even lead to death. In 1923, 20,000 domestic animals (horses, cattle, goats and sheep) were reported to have been killed in Rumania, Bulgaria and Yugoslavia (altogether) by the Golubatz fly, Simulium columbaschense. 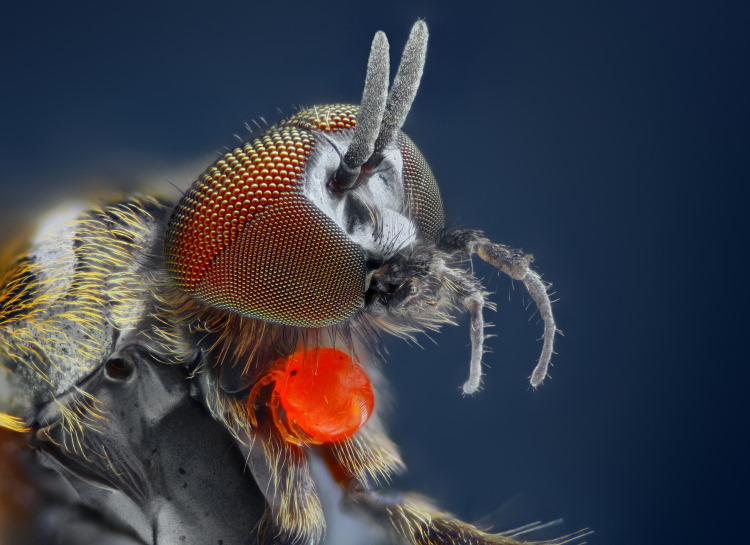 Black Fly larvae are filter feeders, living generally in fast flowing streams where they hang onto the rocks and stones on the stream bed – filtering out small particles of food with a set of bristles around their mouths. Not all live on rocks though, some live on other animals treating them as a substrate, i.e. Simulium reavei lives on the crab Potamen niloticus.

The larva of Black Fly are amazing in that they each manufacture a safety line of silk and attach it to the rock they are standing on before they start feeding. Then if they get washed off, all they have to do is to climb back up their safety line to get home safely.

In the Carpathian mountains in Europe, there is a legend that Black Fly breed in the blood of the dragon slain by St George.

Crane Fly are one of the most easily recognised groups in the Nematocera. Crane flies are commonly called Daddy-Long-Legs in Europe and Australia, but are known as Mosquito Hawks in USA (where they are often erroneously believed to feed on mosquitos).

They are a diverse group of flies characterised by their long legs, thin bodies and long thin wings; a bit like larger mosquitoes, except that the adults are flower feeders and not blood suckers. Larval crane flies are commonly called ‘leather jackets’ and live in the soil, where they feed on plant material – particularly grass roots which tends to make them unpopular with gardeners.

Well I hope this has been an interesting introduction to the curious world of the Nematocera.

Perhaps now you’d like to learn a little more about the horse fly.