Brachycera are the second main stem in the evolution of flies. Many of them are stockier and more solid than the nematocera and some of them are exceptionally good fliers.

The Acroceridae are a small group of relatively uncommon, though sometimes attractive, flies sometimes called Hunch-backed flies as well as Small-headed Flies.

They have, as their name suggests, heads that look small to very small in proportion to their bodies. Their eyes are holoptic (meaning they meet at the top of the head) in both species. The larvae are endoparasites (live inside the host’s body) of spiders. 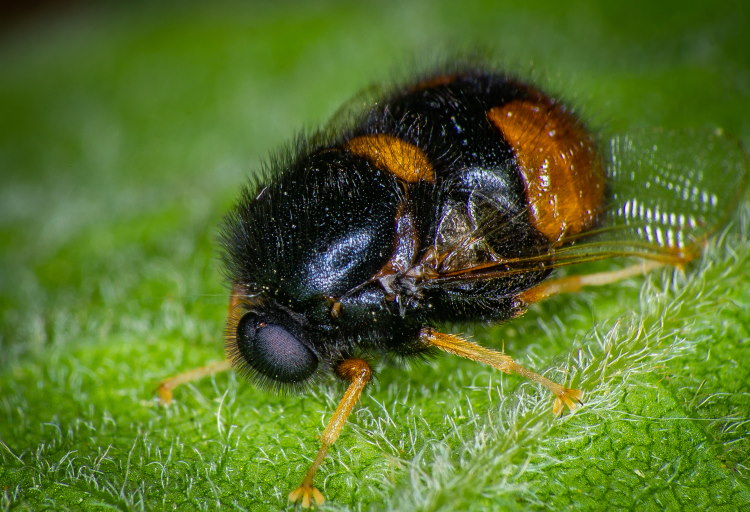 The larvae is of a form called a planidium, meaning the first instar is dorsoventrally (top to bottom) flattened and active. The adult does not lay its egg on the host; instead the planidium larvae seeks out a spider host, climbing up its leg to enter the body, where it moults into a more typical feeding form of larvae. Normally one larvae occurs per spider and the larvae pupates after the spider dies.

Planidium larvar also occur in some families of Beetles and Hymenoptera. Very little is known about Acrocerids world wide.

The larva of Robber flies are believed to be mostly herbivorous (vegetarian), but the adult flies are highly active carnivores.

They are specialised hunting machines of superb design, which live by chasing down other insects – usually in flight,

Robber Fly have long spiny legs in which they hold their prey, as they pierce it with their powerful proboscis in order to suck it dry ‘on the wing’ (while flying). 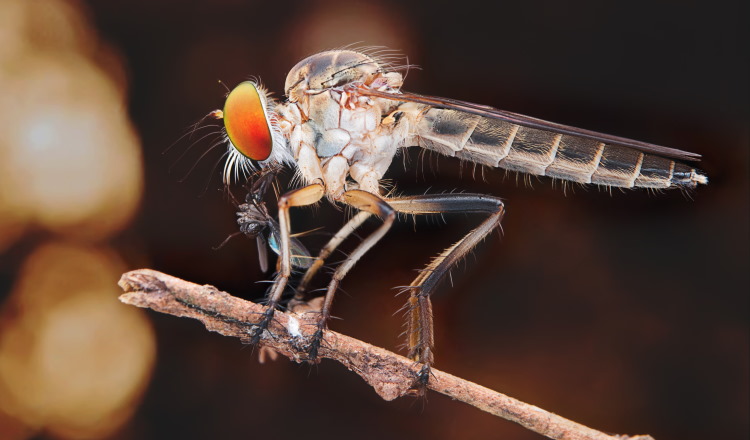 Robber Fly with its prey. The Asilidae are the robber fly family, also called assassin flies.

Both sexes look exactly alike in most species, having huge bulbous eyes separated by a trough at the top of the head. They also have a special collection of outwardly projecting hairs between their eyes and the proboscis to protect their eyes from the struggles of their victims.

Robber flies are not fussy about what they eat and the African Robber Fly Promarchus negligens has been recorded feeding on all of the following: moths, ants, ichneumon wasps, bees, beetles, dragonflies, ant lions, termites, horse flies and smaller robber-flies.

Bee Flies are generally rather large, gentle looking flies with a long thin proboscis. They can be seen flying low across the ground from flower to flower, or hovering expertly in front of a flower while feeding in the spring.

Unlike their relatives the Robber Fly, the Bee Fly larva are the predators. Bee flies are unusual in that they practice a thing called ‘Hyper metamorphosis’, this means that they have two distinctly different sorts of larvae. 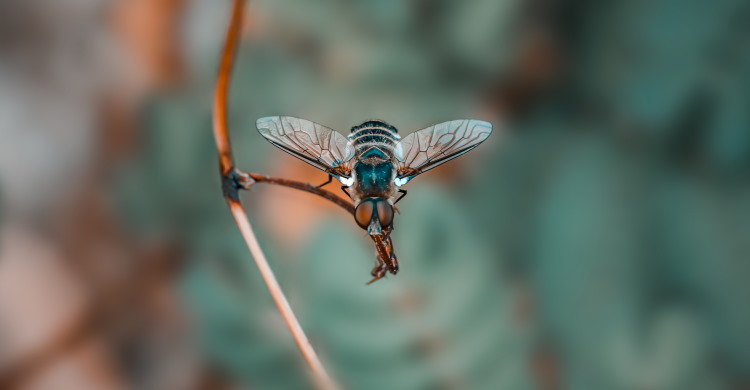 Villa cingulata is a species of bee fly that belongs to the genus Villa and the family Bombyliidae.

The female Bee fly drops its eggs near the entrance to the burrow of a solitary bee or wasp. The egg hatches into the first stage larva, which is a minute worm-like animal that searches actively for a cell of the bee or wasp’s burrow which it enters.

It feeds at first on the pollen and nectar supplied by the cell’s owner, until its first moult. The second stage larva is very different, looking far more like a maggot; it feeds on the larva of the bee or wasp with whose cell it has been sharing peacefully up until this time.

After it has finished devouring the helpless bee or wasp larva, the Bee fly larva pupates in the soil from where it emerges next Spring. The adults, in comparison with their carnivorous larva, feed entirely on nectar. The actual number of species worldwide is probably a lot more than the 3,000+ species so far named.

Dance flies look and act a lot like Robber flies, from which they can be distinguished by their less bulging eyes and the lack of the trough between their eyes; and the fact that their larva, as well as their adults, are carnivorous.

They are called Dance flies because members of the genus Hilara can often be seen flying low over the water in a twisting, spiralling manner – that to our eyes looks much like a dance. 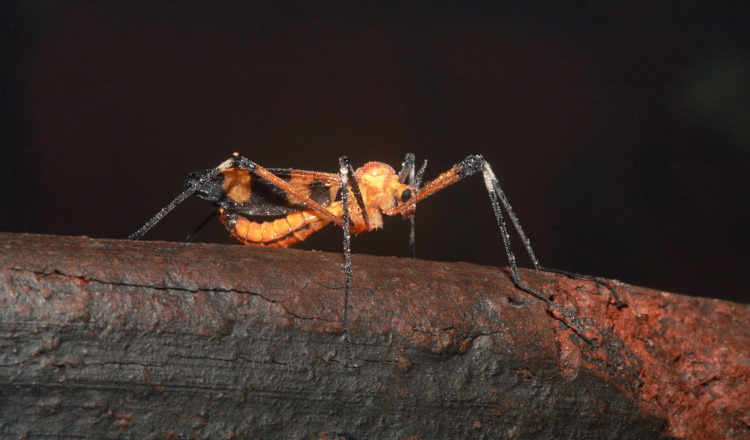 Empis livida is a species of Dance Fly in the family Empididae.

Dance flies are also of interest because of their courtship. Because of their predatory nature, the males often feel it is advisable to offer the female a gift of food to keep her occupied while he is mating with her.

In some decadent species, the male offers the female an empty ball of silk – safe in the knowledge he will have done the deed and escaped before she catches on to his deception!

These are flies without any other common names and – though they are not rare in Britain – Rhagio scolopacea ‘The Down Looker Fly’ is fairly easy to find, if you spend some time quietly looking in a forest or woods in May, June and July. It is usually seen resting facing downwards on a post or tree trunk, waiting to spot a suitable item of prey. 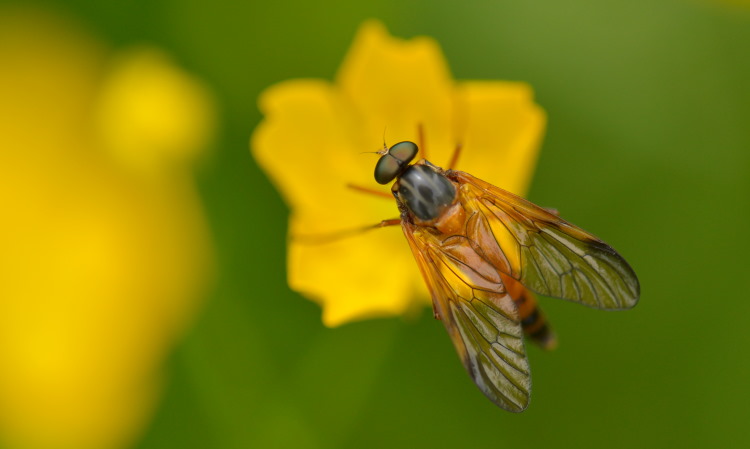 The Snipe Fly larva generally live in mud and leaf mould on the woodland floor, where they will feed on what ever they can find but prefer a carnivorous diet.

Each female remains clinging to the leaf, while others come and lay their eggs on top of her; thus eventually there collects a large mass of eggs mixed up with dead and dying female flies.

It is recorded that North American Indians used to catch these nutritious masses by building a small dam down stream and then beating the branches of the tree to dislodge the egg/fly masses – and collecting them when they got caught in the dam. Apparently these were cooked before they were eaten, but I don’t know how.

These are generally rather pretty flies, which can often be seen sitting on flowers during the summer;the adults are pollen or nectar feeders. The larva, which eat a mixture of rotting vegetable and animal matter, are unusual in having their skin thickened with calcium carbonate.

Potamida ephippium is a Soldier Fly with the interesting habit of spending its larval life inside the nests of the ant Formica fuliginosa (where they exist as scavengers for up to four years, making them one of the longest lived flies in the world).

The reason so many common names have been given to Horseflies in Britain is that they are those annoying, largish flies which make a habit of ‘biting’ you every time you go out in the summer. Again it is the females which do the biting, because they need protein to develop their eggs. 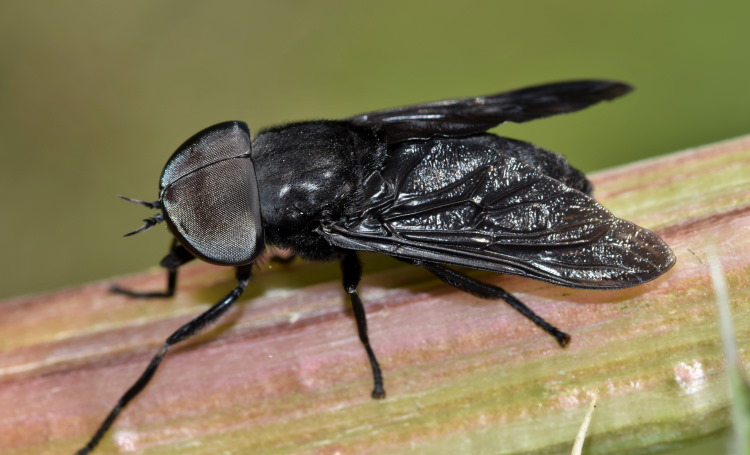 Harold Oldroyd talks about one species of African Horse Fly, specimens of which occur in several collections, but which was found only once by Neave after a mass of them had just eclosed. He caught a good number and brought them back to England; but this species has never been seen again by him or anyone else since.

Could this be the rarest fly in the World?

The larvae of some tropical Horse flies create little cylinders of mud, by descending in a spiral 2 to 5 cm wide and 5 to 13 cm deep. They then crawl into the cylinders and eventually pupate. As the mud finally dries and cracks across the whole pond, the pupae are protected from desiccation because the smallness of the cylinders prevent them from cracking open in a large way and exposing the pupae buried within the soil.

Another amazing Horse Fly is Scaptia muscula of Australia, whose larvae actually live inside the dens of ant-lions (a very dangerous place to live, as ant-lions tend to eat anything they can get their claws on) where they share the spoils of the ant-lions’ traps.

Well, I hope this has been an interesting overview of the suborder Brachycera.

Now you’re a little more familiar with species like the Horse Fly and Robber Fly, perhaps you’d like to learn a bit about the gruesome Coffin Fly.