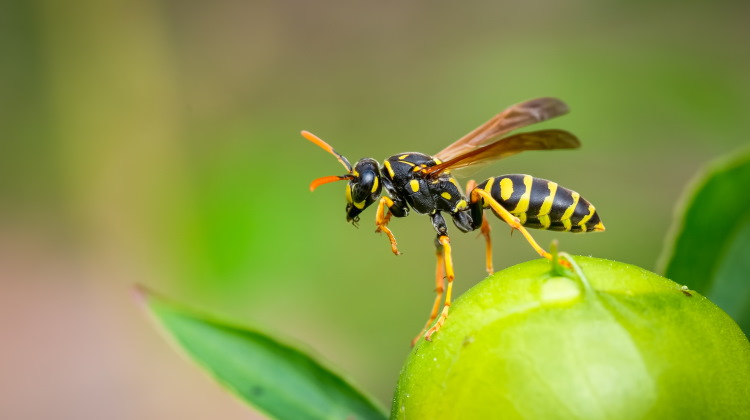 All the social wasps are gathered within the family Vespidae, though not all the genera or species within the Vespidae are social.

The social members of the Vespidae are generally divided into two groups: the Vespine wasps such as Yellow Jackets and Hornets; and the Polistine or Paper wasps.

Not that the Vespines do not use paper to build their nest, because they do.

The Polistine or Paper wasps are further divided into two subgroups, the genus Polistes and the Polybiines consisting of about 20 genera. Like the rest of the Social Insects, the life history involves a number of sterile female workers raising a generation of sexually active sisters – for one or a few queens/mothers.

The eggs are laid in the hexagonal (in most cases) downward facing cells of the nest. When they hatch, the larvae are fed progressively by the workers for several weeks. Once they have put on sufficient weight, they pupate and a week or two later a new wasp emerges – either a worker or a sexual depending on the age of the colony.

The genus Polistes has a world-wide distribution and in Europe and North America its colonies outnumber all the other social wasps combined.

The life history of the genus is typified by the European which is haplometroic (this means that the nests are usually founded by a single Queen or Foundress) who starts her nest in May, having hibernated as a mated queen throughout the winter – often in the company of all the other mated females from their parental nest.

The original foundress is generally joined by a number of auxillary queens (usually 2-6) in June, these are known as associate foundresses. These are usually treated as subordinates by the original foundress and demonstrate their subordinate place through the adoption of submissive postures; and in the gathering of food and regurgitating some of it to the dominant queen or primary foundress.

The dominant foundress actively seeks to prevent her associates from laying eggs and will eat their eggs, when she notices them if they do. In some nests a dominance hierarchy may arise, with one or two of the associate foundresses having a limited laying success.

It is interesting to note that the ovaries of dominated queens tend to regress in direct proportion to the amount of domination she experiences. So that by the time sexual larva are being produced in late July, most of the associate foundresses are no longer reproductively functional.

Complete development of the paper wasp larvea takes about 48 days and the first brood emerges in June. By late July, 200 workers may have been raised, but mortality (death) mostly as a result of predation, means that in most cases far fewer workers than this are available to start raising the sexual larvae.

Sexuals start appearing in August and their numbers continue to increase until they are ready to leave the nest in early September. By this time their hunger will have disrupted the nest, as they will be preventing any further larvae from being fed by eating all the food collected by the workers.

Mating occurs after leaving the nest and mated females then seek a safe place to hibernate. Polistine paper wasps are not limited to temperate regions, though the lifestyles of tropical species follow a similar pattern. They differ mostly in that, because they do not need to worry about winter, newly mated queens do not need to diapause and can therefore set up a nest immediately after mating. Also, in that dominated foundresses are more able to leave a nest and set up their own because there are known time constraints on them, as there are on temperate species.

The Polybiine wasps are a much more diverse group (not all of whom are considered fully social wasps), that produce a wide variety of nests that are really quite attractive.

Belonogaster juncea is a typical ‘quasisocial’ wasp, which demonstrates a life style that is halfway between that of a solitary wasp and that of a eusocial one.

The nest is similar in form to a Polistes nest and is started in a similar way. However no queen comes to dominate and all foundresses are full egglayers – as are the daughters, which mate then join the nest working and laying alongside their mothers. This lack of a non-reproductive worker class disqualifies B.junceus from being termed a eusocial insect.

An example of a social Polybiine paper wasp is the South American Myschocyttarus drewseni. The colony life cycle of M. drewseni often commences with ‘Pleometrosis’ (this means that the nest is originally set up by a group of queens working together, these are often sisters) but usually fades into functional haplometrosis, as one of the original foundresses becomes dominant.

The survival of nests that start off with only one foundress are so low, that an individual queen has more chance of being reproductively successful by working with a group of queens and fighting for dominance of the resulting nest.

Like Polistes, the nest breaks up after the production of sexuals – presumably due to the death of the queen.

Tropical Polybiines of the genus Polybia have perennial nests which last up to 20 years. Some temperate species have perennial nests as well, with the whole colony overwintering together i.e. Polybia canadensis. New nests can form from these perennial colonies by swarming, as well as through the production of sexuals.

The most advanced Polybiines such as Polybia suttelaris can have nests up to one metre across, with thousands of workers and generally reproduce only by swarming – usually at the rate of once a year. Perennial species never produce so many sexuals that they can dominate the workers. This, along with a lengthened lifespan of the queens, may be important steps in the evolution of the more advanced eusocial species.

Polistes represents a relatively simple life cycle which is well adapted to a temperate climate, whereas Polybiine paper wasps show, not only greater numbers and diversity, but a greater degree of evolutionary flexibility. This has has allowed them to colonise a wider range of habitats and to be among the foremost of eusocial insects.

The Vespidae are a physically and ecologically similar group of wasps all of whom are eusocial. They occur in both tropical and temperate climates over most of the northern hemisphere – and they can also now be found in New Zealand and Southern Australia, where they have been introduced.

They all feed their larvae on insects, with the larger Hornets such as the European Vespa crabro, specialising in preying on the rest of the Vespidae – though some species are also partial to Honey Bees (Apidae).

In temperate climes, the Vespidae queens overwinter or diapause in cracks in trees and other suitable places, emerging in the spring to commence nest building.

The nest site is chosen by the queen, with considerable care taking into consideration criteria – such as temperature, humidity, protection from other aspects of the weather and expansion space. Different species use different sites for the nests, i.e. Vespula vulgaris, and Vespula rufa nest in the ground, commonly in abandoned rodent holes; while Dolichovespula sylvestris prefers small trees and shrubs in sheltered places.

In all cases, the nest is constructed of reconstituted wood pulp by a single foundress (this is called primary haplometrosis) and consists of 4 main sections.

The ‘suspension sheet’ which is attached to the substrate (what the nest is hanging from); the ‘petiole’, which supports the downward hanging nest; the ‘envelope’, which may consist of four or more umbrellas that protect the nest from both other animals and changes in the weather; and the ‘combs’, which comprise a series of interlocking hexagonal cells.

A queen nest (the one built by the queen without any workers) usually comprises 8 cells in a single comb. As the nest ages and the number of workers increases, so does the size of the nest (though because of the build up of faeces, each cell is only used 3 times).

European Vespidae show two different lifecycles called long and short. The long cycle, as typified by Vespula vulgaris, V. germanica and Vespa crabro, starts when the queens come out of diapuse in early April. The first workers appear in early June, males in early August and gynes (unmated females) in early September – new adults may continue to emerge until October.

In comparison, the short cycle as evinced by Dolichovespula sylvestris, D. norvegica and Vespula rufa starts when the queens break diapause in early May. The first workers appear in late May, males and gynes both appear by late July and the whole cycle is over by late September. Though generally the nests breaks up after the production of sexuals.

However, long cycle wasp workers can often still be found well into December in Britain and there are occasional records of such Vespid wasp colonies surviving right through the winter.

In Europe, nests of Vespula vulgaris may contain 10,000 cells, however when introduced to Australia and New Zealand they changed their life cycles. Adopting a two year life cycle, adapting to warmer climes and a lack of competition has led to the production of huge nests over 3 metres high and 2 metres wide, containing millions of cells and sometimes thousands of queens in the second year.

Well, I hope this has been an interesting introduction to the paper wasps of family Vespidae!

Perhaps now you’d like to learn a little more about sawfly.