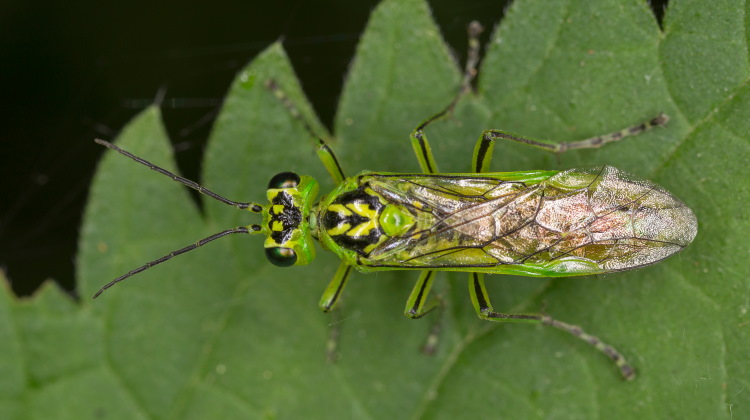 The Sawflies (Suborder Symphyta) are members of the great order, Hymenoptera.

However unlike ants, bees and wasps, sawfly do not have a narrow ‘waist’. Instead, the abdomen is joined to the thorax across the entire width. They can be further distinguished by the fact that, apart from the Cephidae, most sawflies have two small knobs on the upper surface of the metathorax (the last segment of the thorax) called ‘cenchri’.

These are often distinctively colored, and are used to keep the wings in place when they are not being used for flight.

They are called Sawflies in reference to the ovipositor of the female, which often resembles a saw blade. The females use these ‘saws’ to cut slits in the stems and leaves of plants to lay their eggs in.

Some species though, like the ‘Wood Wasps’ or ‘Horntails’ (such as Urocerus gigas) have long, thin ovipositors which allow them to drill holes deep into the wood they lay their eggs in. Their antennae have between 3 to 22 or more segments. Some species, such as Tenthredo sp., are carnivorous.

The males of Trichiosoma sp. have long sharp mandibles which they use for fighting among themselves, often by flying into each other. They cannot sting you, though many of the larger ones will try to bite if you give them the chance.

The larvae have well developed heads and 13 trunk segments. Sawflies, like many other Hymenoptera, have Calcaria (antennal cleaners) on their tibia – however these are absent from the pachylata.

Male sawfly are generally darker and less well patterned than females. The imagos are short-lived, sometimes surviving only a few days. In the UK they are most common in May, June and July. They are very sluggish in their habits, with a weak and heavy flight. They seldom fly for long stretches, and generally only fly in sunny weather, resting on leaves during dull weather and at night.

The male sawfly, as in many non-social hymenoptera, emerge before the females.

Males are generally less common than females and parthenogenesis is common, forming the only known method of reproduction in a number of species in which males are unknown, e.g. Dineura ovata, Hoplocampa brevis, Blennocampa brevis, B. albifes. Unfertilized eggs produce males in Nematus rebesii, N. paredus, and a number of other species, whilst in Eviocampa ovata and Poecilosoma pulveratum unfertilized eggs produce females.

Sawfly eggs are ovoid, longer than broader and occasionally slightly curved and whitish. They can be scattered across the leaf surface (e.g. Nematus miliaris), placed along the edge (e.g. Hemichroa alni), or along a leaf vein as in Nematus rebesii.

Some species insert the egg wholly or partly into the leaf, while others just glue it to the surface. One species places them in a clump, but generally they are spaced apart and some of the leaf-mining species lay only one egg per leaf.

Many species of sawfly place the eggs in the petiole, arranged in either a single or double row. Some gall making species lay their eggs in the growing leaf bud. The eggs expand to more than double its original size in the plant tissue, absorbing some plant juices on the way. This often results in eggs laid beneath the epidermis ending up partly projecting from the leaf surface. In many cases, the edges of the incision withdraw from contact with the egg.

Mostly the females pay little attention to the eggs once they are laid, one exception being Perga lavisii from Tasmania, in which the female lays about 80 eggs in a double row within the leaf of a Eucalyptus, then sits over the eggs with out-stretched legs.

Once the larvae have hatched she follows them and defends them from attack by Ichneumons and other enemies.

Sawfly larvae can be distinguished from the caterpillars of moths and butterflies by their greater number of prolegs. They always have more than five and sometimes as many as 20 prolegs. Unless they burrow within the leaf or stem they are feeding on, then like ‘Lepidoptera‘ larvae with this feeding habit, they do not have any.

The sawfly larvae are often communal, living together in largish webs spun of the food plant. Many of the more ‘caterpillar like’ forms have the habit of jerking the front end of their body up and down when threatened. In the communal species of sawfly this action is often synchronized. Some feed ventrally to the leaf surface, others feed on the edge of the leaf, whilst some feed on or in the stems of grasses or the needles of pine trees.

The last instar, when full fed, seeks somewhere to pupate. Some pupate in the pithy stems of plants, with or without a cocoon, or use holes already made by beetles. Some pupate in the soil, while still others spin a silken cocoon, sometimes a double cocoon, spinning one inside another.

The larvae then becomes an inert prepupa. In some species it stays like this overwinter and then pupates in spring.