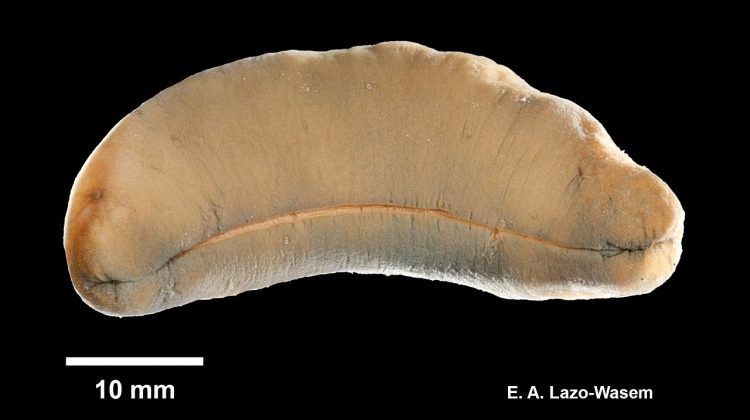 Etymology of Aplacophora: A = not or without, Plak = a plate or flat object, Phora = to bear (“Not having a shell”)

Aplacophorans (Glisten Worms) are small to medium sized worm-like members (1mm to 30cm in length) of the phylum Mollusca.

They live in the sediment of the ocean floor. They have no head, nephridia (excretory organs) or shell. All known species have a dorsal gonad rather than a posterior gonad. The nervous system is basic and ladder-like (with two cross connected chords) with a well-developed cerebral ganglion.

Aplacophorans have a mouth at the front of their body which opens into a muscular pharynx lined by a thick cuticle. This pharynx is typically connected to one or two pairs of salivary glands and the radula sac. Some genera lack salivary glands.

Instead of a shell they have their body covered with tiny calcareous spicules (called aragonitic sclerites).  These are secreted by the mantle epidermis (the same organ that secretes the shell in shelled molluscs).  These spicules can be solid, or hollow and in a few species may be scale-like.

Very little is known about reproduction of Aplacophorans. In one species of Solenogastres from Papua New Guinea, Epimenia australis, fertilization and embryonic development is known to takes place internally.

Their spicules give the animals a shiny appearance that makes them look quite beautiful.

The class Aplacophora is divided into two subclasses:

With the presence (in Solenogatres) or absence (in Caudofoveata) of a muscular foot being one of the main characteristics dividing the two groups.  In some classification schemes these two subclasses are raised to the level of class.

However in 2019 Kevin M. Kocot et. al. described Apodomenia enigmatica, a new species of Solenogastres that lacks a foot.  Proving once again that there are still many amazing species sharing this planet with us that we know nothing about.

The Biology of the Solenogastres

The subclass Solenogastres includes about 284 species, grouped into 23 families within 4 orders.   Their occurrence is a common, and sometimes abundant on the floor of the ocean.

They are most commonly found in and around coral reefs.  Physically they are described as small to medium, shell-less and worm-like (vermiform) animals. They possess a ventral pedal groove (see photo above) and a terminal or subterminal pallial cavity. Unlike the Caudofoveata, Solenogastres possess a muscular foot.

Twenty percent of the Solenogastres have secondarily lost their radula. In the 80% of species that do possess a radula, the radula may have from one to many (at least 200) teeth.  Solenogasres possess a single midgut organ which contains both the stomach and the digestive gland.

They have an unusual sense organ beside their mouth called the ‘vestibulum’. Their elaborate salivary glands are an important taxonomic characteristic. They do not have true ctenidia (specialised organs for respiration, a bit like gills) although they do possess gill-like structures that are similar.

All known Solenogastres are carnivorous and feed on cnidarians and ctenophores.

Unlike most molluscs they do not use their radula as a rasping organ, rather they use it to pierce the shell/skin of their prey feed by either sucking the bodily fluids of their prey, or by eating eating their fleshy tissue.

The Biology of the Caudofoveata

The Caudofoveata are the smaller cousins of the Solenogastres, seldom reaching more than 30mm in length. They live predominantly in the muddy sediment of the sea floor where they can be quite abundant. Caudofoveates spend most of their lives burrowing in the seafloor sediment and generally live in much deeper water than the Solenogastres.

They move through the sediment using their calcareous spicules to pull themselves along and have been called the earthworms of the sea.

Caudofoveata possess a midgut in which the stomach and the digestive organ are separated. They also have one pair of ctenidia in their mantle cavities. Unlike the Solenogastres their mouth possesses an oral shield/oral disc which is used for locomotion.

Some species are known to feed by lying buried with just their mouth above the surface of the sediment. In this way they catch passing detritus and micro-organisms, especially foraminifera.

The caudofoveata are dioecious, meaning they are either male or female but not both. After the eggs have been fertilized they are brooded by the female until they hatch. The larvae are free swimming.