Etymology: From the Greek ktenos for a comb, and phoros bearing. Hence: a comb bearing animal.

The phylum Ctenophora is a small phylum containing about 90 species of generally small and delicate animals, known as Comb Jellies or Comb Jellyfish.

Many species are almost transparent and a few species can be very beautiful, as they have the ability to produce green and blue coloured light. There are between 100 and 150 species of Ctenophora known to science. 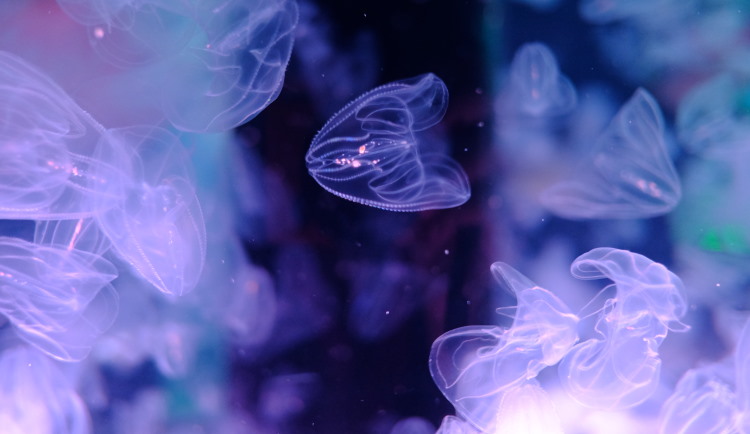 Ctenophores can be found as easily, if not more easily, far out to sea as they can near the shore. Most species prefer warmer waters and 75% of species live in temperate or tropical seas. A few species live deep down in the sea and a few others are found around the poles.

The Sea Nut (Mertensia ovum) is a cold water specialist. The two most common species are the Sea Gooseberry (Pleurobranchia pileus) and the Melon Jellyfish (Beroe sp.), both of which have a cosmopolitan distribution (meaning they can be found all around the world).

Comb Jellies can occur in huge numbers and are known to effect fisheries at times because of their feeding on the eggs and fry (newly hatched and young fish).

Mnemiopsis leidyi is a common on the Atlantic coast of North America where it normally feeds on copepods and the larval forms of various other marine animals. These other species include the larvae of Oysters and it sometimes accumulates in such vast numbers that it has a negative effect on the Oyster crop.

More interestingly, it was accidentally introduced into the Black Sea in the early 1980s where it experienced a massive population explosion – which had disastrous effects on the Black Sea fishing industry. It also spread to the Sea of Marmara and – in the late 1990s – to the Caspian Sea.

Some species of comb jelly are able to glow with a faint phosphorescent light. Generally this is only seen at night.

Venus’ Girdle (Cestus veneris) is one of the largest species known. Its body is 8 cms wide but 150 cms long and it can swim with a snake like movement in the water. However it is often seen at night hanging unmoving in the water, visible because of its greenish-gold phosphorescence. It has been called the Sea Sword by sailors in the past. 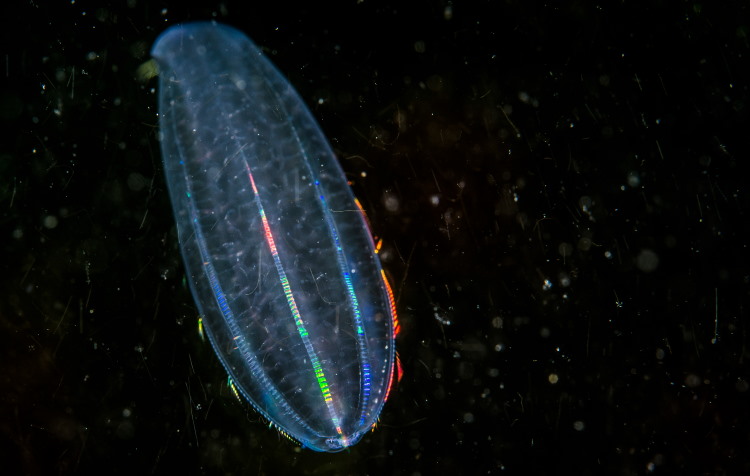 The larvae of the Pacific Ocean species Eulampetia pancerina is parasitic on Salps such as Salpa fusiformis. It bores into the salp’s soft body and feeds on blood corpuscles. However, it leaves the salp’s body once it is grown and lives a normal non-parasitic existence as an adult.

In 1908, the first sessile (living attached to something else) ctenophore was discovered in a fjord on the coast of Greenland. Called Tjallfiella tristoma, it lives attached to the Sea Pen Umbellula lindahlii at depths of about 530 metres.

The Tentaculata possess two tentacles, which in turn possess sub-tentacles along one side. These tentacles are armed with special adhesive (sticky) cells called ‘Colloblasts’. These colloblasts help attach prey items to the tentacles, which are then drawn across the mouth of the animal so that the prey can be eaten.

The class Nuda have no tentacles but do have very large mouths on their bell shaped bodies. They look hollow and can in fact eat prey larger than themselves. They have hooks in their gullet to allow them to hold onto their prey and glands that secrete a poison which paralyses their prey. More than half the known species of Comb Jellies are part of the class Nuda.

The Ctenophora body consists of two layers of cells called the ‘Epidermis’ and the ‘Gastrodermis’. Between them is a poorly defined third layer called the ‘Mesoglea’. There is no coelom.

On the external surface of the comb jelly are eight rows of sets of cilia, these are called the ‘Costa’.

The animal uses these to swim with and to maintain a correct orientation in the water. However, active controlled movement is vertical – either up or down in the water. The laterally (sideways) flattened species (like the genus Cestum in the Tentaculata) can also swim by means of undulations of their ribbon like bodies, as well as with their costa.

Most species are globular and have a mouth at one of the body’s poles and an anus at the other. The gut runs straight between the two. Various canals leave the stomach and reach out to the costa and other parts of the animal’s body. 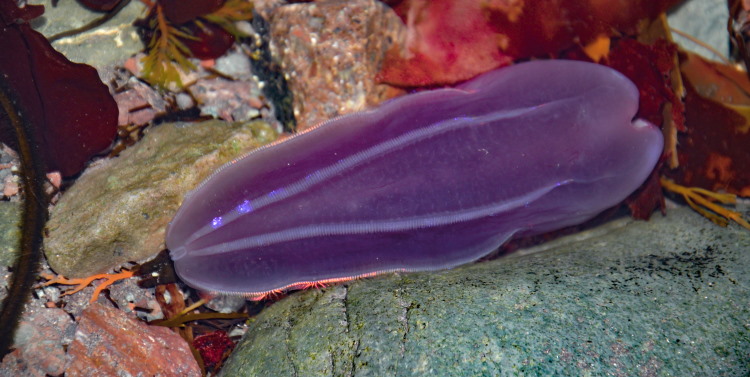 Comb jelly from Carlini Base, Antarctica

Digestion is both extracellular and intracellular and wastes are voided (removed) via both the mouth and the anus. There are no special organs of gaseous exchange, this occurs across the whole body surface. There is also no circulatory system.

Ctenophores have no brain but they do have what is called a sub-epidermal nerve net, meaning they have a network of nerves running beneath the outer skin. These are most concentrated beneath the costa and at the bases of the tentacles.

The main sense organ is the Statocyst which is situated ‘apically’ – near the anus. This organ detects and keeps track of the animal’s vertical position, thus allowing it to remain upright.

Comb jellies are also known to have some chemical sense organs around their mouth. The Nuda use chemicals to detect the presence of other ctenophores in the water around them.

All ctenophora are hermaphroditic – meaning they possess both male and female reproductive organs. A very few species can reproduce asexually.

Eggs and sperm are shed into the water and after fertilisation an ovoid larvae develops, called a Cydippid larvae. This free swimming larvae grows naturally into a new Comb Jelly in most species. In the laterally flattened species such as Cestum there is a sort of metamorphosis.

Well I hope this introduction to the phosphorescent world of the comb jellyfish has been interesting!

Perhaps now you’d like to learn about the lamp shells.