Etymology: Mono = one or single, Plak = a plate or flat object, Phora = to bear (“Having one shell”)

The monoplacophora, common name (deep-sea limpets) are a small, but ecologically important group of single-shelled molluscs. Photogenically they are a sister group to the Aplacophora. The length of the shell in adults ranges from 3mm to 35mm.  They are also know by the name Tryblidia.

Monplacophorans were known only as a long extinct fossil lineage (400 MYA) until 1952, when some live specimens of Neopilinia were collect off the coast of Costa Rica. These specimens were dredged from the sea floor at a depth of 3,570 meters. Since then other species have been collected from both shallower waters (180 meters) and deeper waters (5,800 meters). 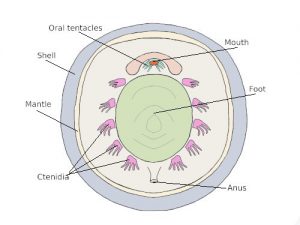 Representative diagram of a general Monoplacophoran as seen from below – showing only some organs.

Seen from above, monoplacophorans look like little elf-hats. Their shell is bilaterally symmetrical with a smooth circular front and a raised portion that flows into a small forward pointing peak. The animal that is hidden beneath this thin shell is unique among molluscs. Because of the serial arrangement of some of their organs they have been both taxonomically interesting and contentious.  Seen from below, what is most visible is the characteristic mollusc foot.

Monoplacophorans have a reduced, or ill-defined head.  The mouth is at the front of the body and resembles a V-shaped thick lip. On either side of this are a group of small tentacles used to bring food into the animal’s mouth. Leading away from the mouth is a cone-shaped stomach followed by long, looped alimentary canal that terminates in a posterior anus. This intestine may have up to six loops but they are not crossed over into a figure eight as in many molluscs.

Other prominent organ include multiple paired ctendia (respiratory organs), up five on each side of the body, as well as numerous (up to 20) nephridia (excretory organs). The heart equivalent of monoplcophorans is made up of a bilobed ventrical connected to several paired auricles (atria) through a long aorta.

The monoplacophora radula is described as docoglossate, meaning it has two rows each with a central tooth, three pairs of lateral teeth, and two pairs of marginal teeth.

The nervous system is comprised of two pairs of simple ganglia (four in total) that lead into four longitudinal chords. These chords make up a double circle (inner = pedal and outer = lateral) of nerve chord.

There is no obvious external difference between males and females (at least as far as we humans can tell).  Monoplacophorans have no eyes. They also possess an organ called a statocyst, that apparently allows the animal to maintain its equilibrium. 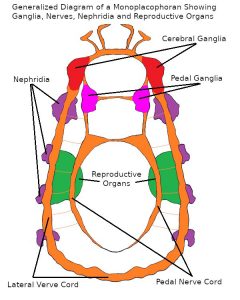 However we really know very little about these unique creatures. In the genus Micropilina, females have been recorded brooding developing young for a short time in their distal oviduct and pallial groove.

In their natural habitat, monoplacophorans can be found on both hard and soft substrates. They feed by scraping up material from the surface they are resting on. This allows them to feed on a variety of microorganisms including protozoans, radiolarians, diatoms, foraminifera and sponges. They also feed on any detritus they come across and occasionally on mineral deposits.

Much remains unknown about these amazing and ancient animals. As Gerhard Haszprunar and Bernhard Ruthensteiner say in their paper Monoplacophora (Tryblidia)—Some Unanswered Questions:

“Despite their importance in understanding molluscan evolution and phylogeny, Monoplacophora remain poorly studied.”

Hopefully one day science will be able to answer all your questions about the monoplacophora. Until then I hope you enjoyed what little we know. You never know, maybe one day you could be the scientist who finally opens up the door to a full understanding of these small, but fascinating creatures.

Oh – and while you’re here, perhaps you’d like to learn more about chitons.