Etymology: From the Latin Tardus for slow and Gradu a step, meaning ‘slow walker’ – which they are.

Characteristics of the Tardigrada:

Tardigrades (or Water Bears a.k.a Moss Piglets) are a small phylum of around 1,000 known species of truly amazing animals, that capture the hearts of all that get to know them.

They are related to arthropods, probably originating from a similar proto-arthropod ancestor.

They have an external cuticle, though it is built up from a protein compound called an albuminoid, rather than from the chitin that comprises the insect cuticle.

The name Tardigrades was first used in 1776, by an Italian scientist called Lazzaro Spallanzani.

However they were probably first seen by Anton van Leeuwenhok, the inventor of the microscope, on September the 3rd 1702. Leeuwenhok had performed an experiment whereby he dried dust from the gutter on the roof of his house for two days, then added to it water that he had sterilised by boiling.

He was amazed to see living things come into being in the dust when he sprinkled it with this water!

Leeuwenhok did not name the animals though. Spallanzani repeated this experiment in 1776 and he named the animals tardigrada, from the Greek for ‘slow’ and ‘walk’ because of there ponderous gait.

Tardigrades are small animals, ranging in length from 0.1 to 1.2 millimetres.

The species Echiniscoides sigimunde from European and Asian coastal habitats is the largest known to science. 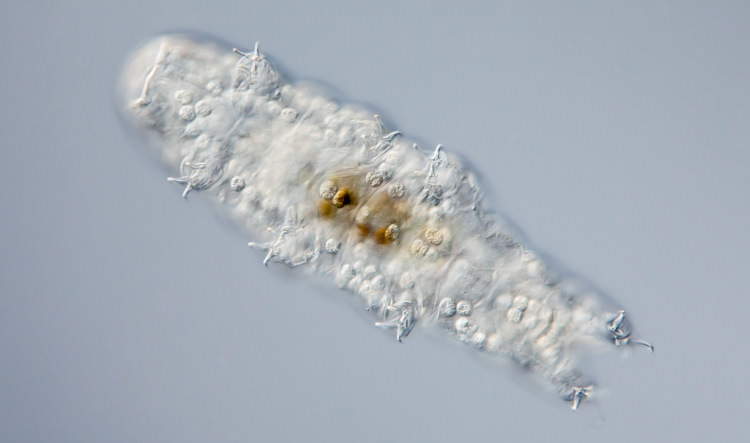 Tardigrades live all over the world, from the deep sea bed to the Himalayas – and from the tropics to the poles. Most species live in fresh water, often in habitats that are subject to frequent periods of drying and then rewetting – such as the moss on the roof of your house and the algae in the gutters.

Because they are so small and because of their ability to form a ‘tun’ (see below), they can be blown around the world in the wind like particles of dust.

This means that terrestrial species can be found distributed all around the world.

Tardigrades are what is called eutelic, meaning there is a fixed number of cells in the body of an adult of any given species. This is normally around 40,000 cells.

Tardigrades have 8 legs, but these legs are not jointed like the legs of insects and spiders, etc.

They have a relatively large brain and a well developed nervous system, with a double suboesophagal ganglia and 4 further ganglia along the body. Being small they have no need of, and therefore have no, gaseous exchange system and no blood system.

Most of the body cavity is a haemocoel but there is a true coelom around the gonads.

Tardigrades are all suctorial feeders. They have two sharp stylets within their oral cavity which they use to pierce the the cells of their food. The fluids are then sucked out of the cell, using the muscular pharynx as a pump. 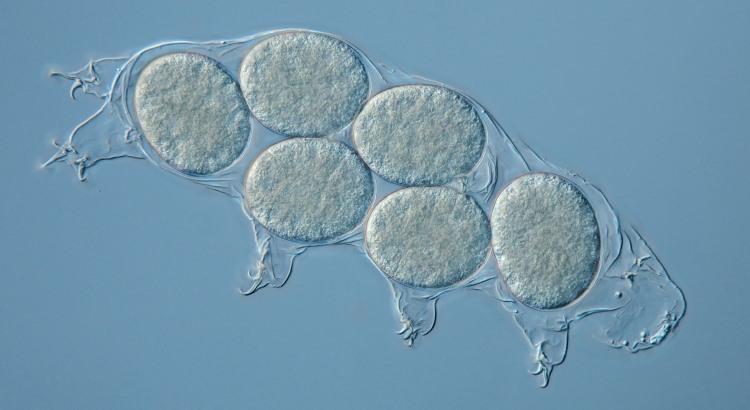 Hypsibius dujardini, a species of tardigrade shows eggs developing inside the cuticle

Most species feed on plant materials such as the mosses and algae that they live amongst. Other species are carnivorous, feeding on nematodes and rotifers.

This is particularly true of the deep sea marine species which live in spaces between sand grains.

Tardigrades are gonochoristic, meaning they are either male or female. Though in some species, only females have been found. These species are presumed to be parthenogenetic. Otherwise, females tend to lay their eggs inside their old cuticles as they moult. These eggs are then fertilised in situ by one or more males.

The tardigrade Hypsibius dujardini has a generation time of around two weeks and can be easily cultured, making it an ideal organism for study.

Tardigrades are survivors par excellence, the best in the animal kingdom.

They can survive many environmental extremes by converting themselves into a ‘tun’.

This involves them pulling in their legs – to give their body a cylindrical shape – and then shutting down all their metabolism.

Any other animal that is exhibiting zero metabolism is considered to be dead. Only tardigrades regularly return to life again from this state.

They perform this miracle by replacing the water in their membrane lipids with a sugar called trehalose. Different species have different survival characteristics and not all species form a tun. Deep sea species (which can survive pressures as great as 6000 atmospheres) for instance do not.

Other species have been known to survive temperatures as low as -272 for a few minutes, which is as close to absolute zero as you ever want to get – colder than outer space.

They have also survived temperatures as low as -200 for more than 20 days. Other species can go to the other extreme and survive temperatures as high as 125C, well above the boiling point of water.

Still others survive doses of X-rays 250 times greater than that which would kill a mammal – up to 570,000 rads of x-ray radiation (2,000 rads is easily enough to kill a human being).

Tardigrades are the only animals that can survive having their photo taken in an Scanning Electron Microscope, which involves placing them in a vacuum and then bombarding them with electrons.

Species which survive periods of drought (i.e., extreme dehydration) have been revived after lying dormant for 120 years amongst the dried mosses in a botanical museum.

In 2008, a group of European scientists exposed two species of tardigrada to the vacuum and radiation of space. They survived the vacuum and low temperatures easily and even laid fertile eggs afterwards. But exposure to the full intensity of the sun’s ultra-violet radiation caused them problems and survival rates were then much lower.

There is no doubt that tardigrades could travel to the stars amongst the dust on a piece of rock, were the earth ever to be destroyed. Scientists don’t really know what their limits are – but we do know they are the toughest animals alive, for sure.

I hope you have found this introduction to – and facts about – the phylum tardigrada to be useful! 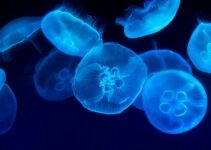