Home
inverts
Trilobites: The Amazing Animals We Only Know From Fossils
Help us spread the word...
TwitterFacebookPinterest

The trilobites are an extinct group of arthropods that lived in the seas of the world for about 380 million years.

That is from the Precambrian 610 MYA (million years ago) to around the end of the Permian 230 MYA.

Everything we know about Trilobites therefore is derived from fossils – nobody has ever seen a live one.

The trilobites were a very successful group of animals, with more than 15,000 species being known to science and more being discovered every year. A result of the basic robustness of the general arthropod design of external body skeleton, jointed limbs and segmented body plan.

These species are divided into 150 families and 5,000 genera.

While trilobita all follow a similar basic plan, with 15,000 species there is considerable scope for variety and trilobites come in a wide range of shapes and sizes.

The smallest are about 1 mm long, while the largest reach to 750 mm (over two feet). However within this range, most species were between only 30 and 80 millimetres long (1 to 2.5 inches). 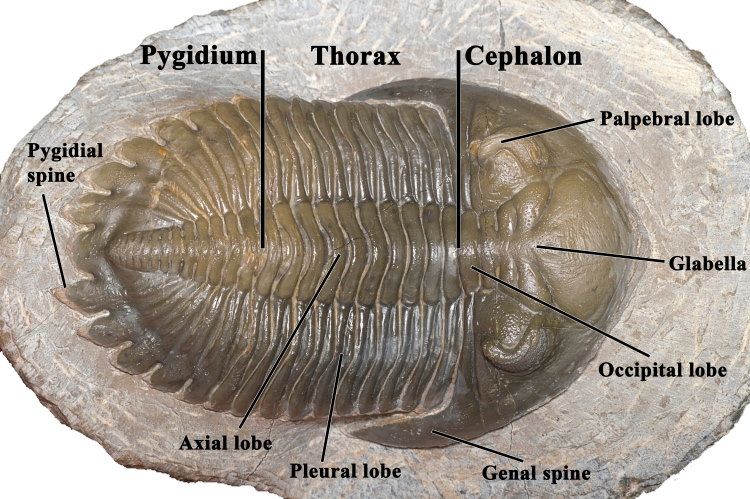 Trilobite anatomy indicated on Hollardops, a genus of trilobite in the order Phacopida

The head was protected by a single large plate of exoskeleton (chitin) called a cephalic shield. This was originally derived from 5 (in most species) smaller plates which have become fused together.

The thorax is composed of a series of practically identical segments enclosed in a series of plates. These plates, one per segment, overlapped posteriorly (towards the back of the animal) like tiles on the roof of a house.

This arrangement allows the animal some freedom of movement. Many trilobites were capable of rolling themselves up into a ball, much like modern day woodlice, or pill millipedes.

The pygidium is the tail end of the animal. Like the cephalon, it is comprised of several fused plates. Generally it was smaller than the cephalon.

The thoracic segments all have two grooves running across (from front to back). The combined effect of these is to make the animal look as if it has its thorax divided into 3 longitudinal sections.

It is this that gives the animals their name: tri for three and lobita from lobe, hence trilobite = three-lobed.

Among the large diversity that includes the trilobites, are many species that had a variety of spines extending from various parts of the body. In some species, these spines became quite elaborate as in this specimen of Dicranurus monstrosus. 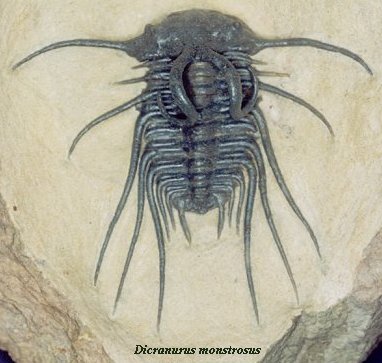 PinScientists believe these spines could have served a dual purpose of protection against predators and as flotation devices, to help spread the animals weight when it was feeding on the surface of soft mud.

Attached to the head were several sets of limbs and one pair of antennae. These antennae were long and thin (filiform) such as those of a cockroach.

They are rarely preserved in fossils and should not be confused with the horns found on the cephalic shield of some species such as Asephas punctatus.

The remaining segments of the body each held a pair of limbs.

These limbs were – unlike those of modern day crustaceans – all very similar.

This is one of the outstanding characteristics of the trilobites: the fact that they showed practically no variation in the form of the limbs at all. The legs of trilobites were biramous, with an inner walking branch and an outer gill-bearing branch, both arising from the first segment – the coxa. 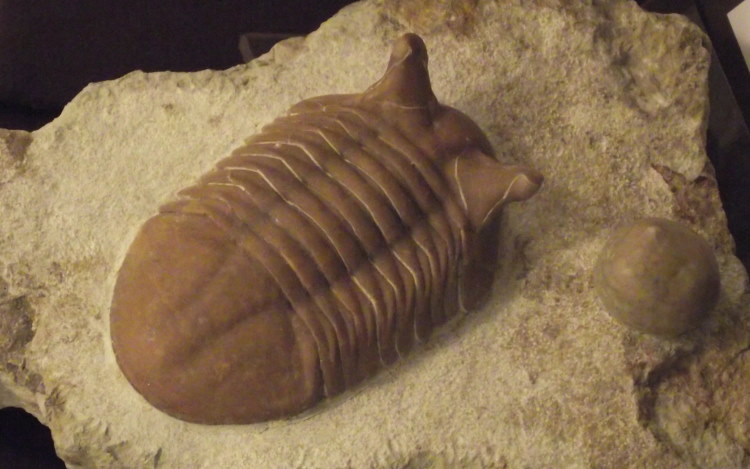 The walking leg had a further six similar segments and the gill-bearing leg had a variable number of segments.

In some species, the terminal segments were much flattened and thus enlarged. Scientists believe they may have been used for swimming or for digging into mud.

The walking leg is often called the teleopodite or inner ramus and the gill leg is called the outer ramus. Alternatively the walking leg can be called the endopodite and the gill leg the exopodite, as in crustaceans. However, the scientists believe the biramous legs of crustaceans and trilobites are not homologous. The pygidium bears two appendages like shortened antennae, they are called cerci – as they are in the insects.

Trilobites have two sets of eyes.

These are compound eyes, meaning they are composed of a number of single lens units – often called ommatidia. Crustaceans and insects also have compound eyes, but those of trilobites are different in their structure. Some of them demonstrate principles of physics that modern scientists have only recently discovered. The lenses are crystalline and quite unique.

We know nothing about the nerve supporting the eyes, or anything else of the nervous system of trilobites. However, given their morphological complexity they must have had a brain of sorts and a nervous system radiating from it.

Because trilobites lived in a great diversity of habitats, there is a wide range in the form of the eyes found within the group. Obviously active hunters have larger, better eyes than those that live in burrows and filter feed. 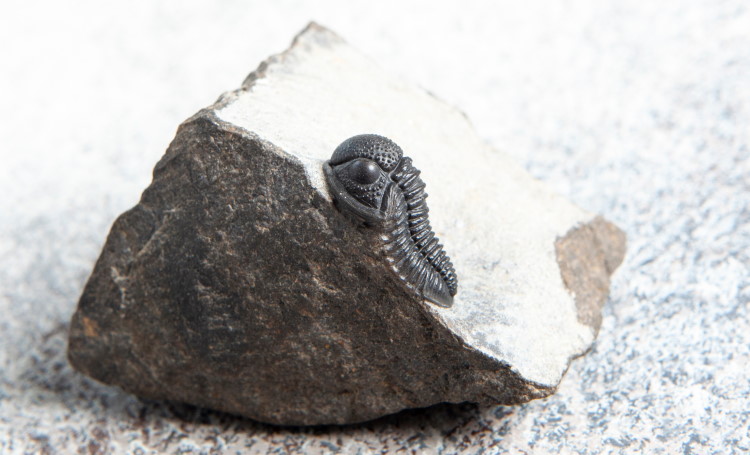 The cepahlic shield extends under the animal, as well as on top of it. This means the animal’s mouth has to be placed somewhat anterior to the foremost part of the animal. It is in fact at the posterior edge of the hypostome.

The hypostome is a concave structure thought to house the mouth and the oral cavity. It is also the point of origin of the antennae, which pass through two lateral notches in it.

The shape and structure of the hypostome is important in taxonomy and has been used by paleoecologists to support various claims concerning the feeding habits of different species of trilobite.

Food would pass forwards along the digestive tract towards the front of the animal and its stomach, before making a U-turn to pass through the intestines to reach the subterminal (before the end of the body) anus.

With 15,000 known species, it is obvious that trilobites occupied a variety of niches – much the way crustaceans do today.

Scientists believe that many were detritivores, feeding on the organic matter found in bottom mud and that some even lived in burrows.

Some are believed to have been filter-feeders, some carnivores and some lived more active lives. Maybe even living permanently as part of the large community of organisms that lives near the seas surface. 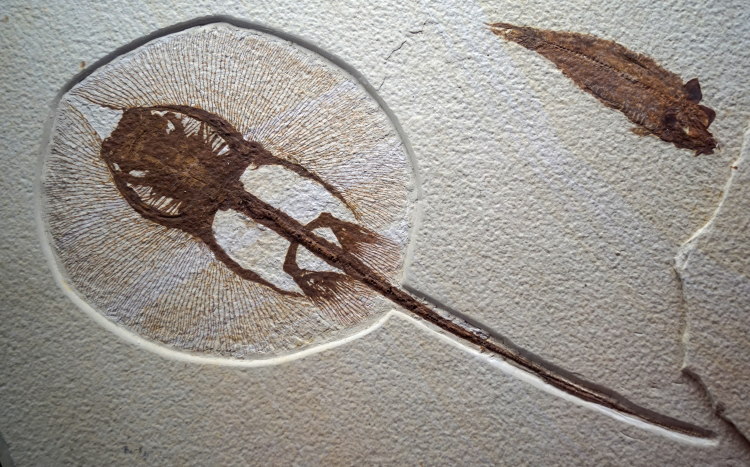 Some species are also known to have lived on the deep sea floor, in areas where the mud is anoxic (has no oxygen). It is suspected that these species may have had symbiotic bacteria living in their tissues, such as their gills. Much as many modern day creatures do who live in these extreme environments.

No trilobite species lived all through the 380 million years that they existed.

Most species survived for only a few million years. This makes them very useful to geologists, as known species can be used to identify the age of rocks in other places than where they were first identified.

Some trilobites had very limited distributions, as far as we know. But others have been found all over the world. At one site, in Wales in the UK, ten different species have been found together. 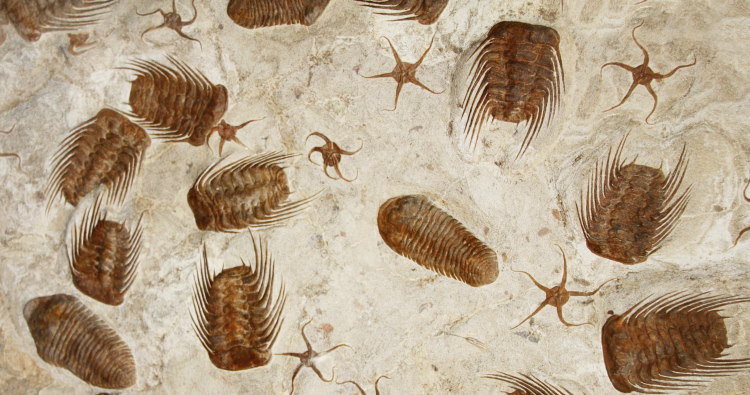 Trilobites had three distinct stages to their life cycles and (unlike insects) they grew and moulted throughout each of these stages.

The higher classification of the Arthropoda is still in a state of considerable dispute among the experts. Therefore unless you are actually doing research into this area of classification, it is relatively safe to use a simple scheme such as that described on this site.

Here the Arthropoda are a phylum, which is divided into at least 4 subphyla – three of which are still extant (have living members): Chelicerata, Crustacea and Uniramia.

The trilobites are included in a separate subphylum, called Trilobitomorpha (Trilobite like animals), within which the trilobites comprise a class (class Trilobita) which in turn contains 8 orders.

Trilobites, with their obvious success as a group of animals, continue to fascinate many people. Even though modern research techniques continue to improve, there is still much about the ordinary, everyday lives of trilobites that remains a mystery.

Nevertheless, they remain a fascinating part of the history of life on this planet. I hope you have been able to enjoy this brief introduction to them as well as all the wonderful images of the trilobite fossils!

Perhaps now, you’d be interested to learn all about crustaceans.