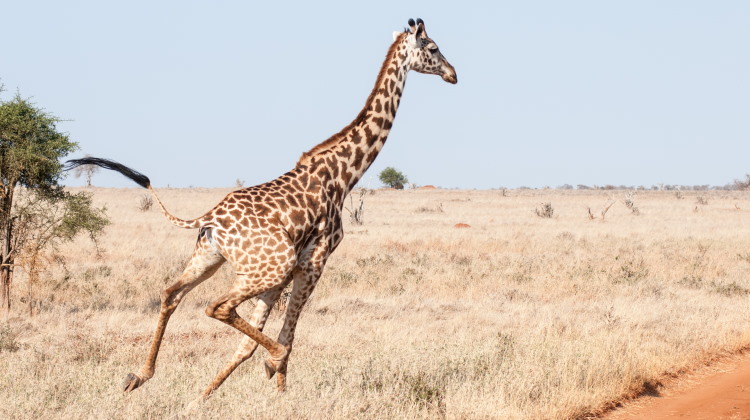 Locomotion in mammals, and other animals,  is about how animals move.  Like most reptiles, the majority of mammals travel across land, but they don’t all move the same way.

Mammals, however, move much further and more often than reptiles. Partly, this is made possible by the possession of a homeothermic body.

Partly it is also made possible by the way mammals’ limbs articulate with (join) the body. The result of this is that a mammal moves its legs backwards and forwards beneath its body, whereas a reptile has its legs stuck out to the side.

The mechanics of mammalian walking and running can get quite complicated and involve the use of tendons and the back as energy storing springs to enhance efficiency.

This has been especially well studied in cheetahs, which dislocate and relocate their backs during each stride. In horses, some scientists in 1998 claimed they gallop with 109% efficiency. For the sake of this site, though, we will keep things simple.

The modes of locomotion used by animals have been divided up into more than 30 different types… and it is not unusual for an animal to change from one type of movement to another (i.e. from walking to jumping in a given period of locomotion).

A horse for instance has three natural gaits: a walk such as the giraffe walk, a trot and a gallop.

In 2009 a paper was published suggesting that 50% of animal toys depict animals walking incorrectly, often having them walk with a trotting gait.

How Do Dogs Walk?

When moving slowly all four legged mammals use the same gait.  Basically they walk one side then the other.  Firstly they step with their left hind leg followed by their left foreleg. Then they step with their right hind leg followed by the right foreleg, and so on. This moving forward of the hind leg first creates a momentary V shape in the profile of the animals legs when seen from the side.   Different species vary from one another only in the timing of that stepping. This is the basic slow walk, as the animal speeds up the timing of the placing of the feet on the ground can change so that sometimes the animal is momentarily supported by only two legs.

The reason this way of walking is used by all four-legged mammals is because it offers the maximum stability. In other words, when walking slowly, the animal’s body is always supported by their having three of their feet on the ground, forming a triangle. The nearer their center of mass is to the center of the three points of this triangle, the more stable they will be.

The trot is different from a walk in that the animal moves opposing diagonal limbs in tandem, i.e. front left and back right, followed by front right and back left. The trot is a energetically easy gait, unlike ‘pacing’ and ‘cantering’ or ‘loping’ which are less energy efficient and tend only to be used for short periods of time.  Wolves use a trotting gait to cover huge distances comfortably.

When an animal is moving and increasing its speed it must change from a walk to a trot, and then to a gallop.  Both these changes involve ‘halfway houses’ for short periods of time as the animal shifts its gait from one form to another, this can result in momentary perceptions that do not fit any of the defined gaits.

What Is A Gallop?

Most terrestrial mammals can jump or leap, but some use this form of locomotion far more regularly than others.

Leaping occurs either from two legs (only as in a monkey) or from all four legs simultaneously, as in the pronghorn. Leaps can be mixed; cats for instance leap mostly from their back legs, but get some lift from the front legs also – which leave the ground before the back legs do.

Primarily aquatic mammals such as seals, etc., have much more ungainly gaits. Most seals effectively crawl; stretching forward then hunching their back to bring the hind part of the body as far forward as possible, then raising and pushing the front forward again. This is slow, but gets them where they need to be.

Elephant seals drag themselves forward with their front limbs only and Falkland Sea Lions use a sort of slow gallop like a hare. They can, however, move as fast as a running man when they want to.

Mammals That Walk On Two Legs

We, of course, walk on two legs as on occasions do Gibbons, Gorillas and Chimpanzees.

More familiar perhaps are the Kangaroos of Australia which jump on two legs as do Jerboas, Jumping mice and a variety of other smaller Australian marsupials. The Jerboa is the most fully bipedal of all these, as it walks on two legs even when unhurried. Whereas the others tend to walk on four legs, but go up on two when jumping in order to move more quickly.

Brachiation is the more common means of locomotion of Gibbons and a variety of other primates. Brachiation means moving by swing from branch to branch with your arms.

Climbing trees can be achieved using gaits similar to both the Dog walk and the Giraffe walk, while Squirrels actually gallop up trees. Squirrels are also unique in being able to walk down trees as well. The ankles on their hind legs are so flexible that they can turn through 180 degrees allowing them to be equally useful going up and coming down.

Many land mammals can swim, even (and including) the big cats. Even some bats can survive falling in the water. Hamsters fill their cheek pouches with air before taking the plunge.

Some species are semi-aquatic and are equally at home in the water as on land, i.e. Otters, Hippopotamuses.

For most terrestrial mammals, swimming involves walking in the water. In other words, they use the same gait as they do on land. The more fully aquatic species are, however, more adapted to the water. Beavers fold their front legs under their chests while swimming.

Moving towards more fully aquatic species, Sea Otters float quite happily on their back, while seals are so adapted to the water that they are clumsy and foolish looking on land.

Different species swim in different ways. Many seals and sea lions use both front and hind limbs when swimming, but Elephant seals only ever use their hind limbs. In the Cetaceans which are fully aquatic, the hind limbs have been so adapted to become the tail flukes – a single member. This ‘tail’ has the flukes horizontal rather than vertical like the tail of a fish (see fish anatomy). Others will toboggan on snow.

Finally, some mammals have taken to the air. In fact about 20% of all species of mammals can fly. These are the bats. Apart from bats there are a few mammals which can glide.

There are flying squirrels equipped with a flap of skin stretched between their fore and hind limbs, which when stretched out allows them to glide often for considerable distances. They are found in Asia, Africa and America. There are also gliding marsupials in Australia, and a flying (gliding) Lemur in the Malay Archipelago.

Gliding flight only goes down however and the animals have to climb up a tree eventually to regain the lost height.

Bats, however, really fly – most of them very well.

Anyone who has, like me, tried to catch bats in a butterfly net at dusk will be only too aware of how agile they are.

Bats have wings of skin stretched between greatly lengthened finger and arm bones. Bats tend to fly erratically, however some species have been recorded flying at speed of over 20 kmphh (13 mph) in level flight and the record is for 25 kmph (15.5 mph) by a Big Brown Bat, Eptesicus fuscus.

Well, I hope you have enjoyed this brief discussion of mammal locomotion.

Perhaps now you’d like to learn about the mammalian diet.