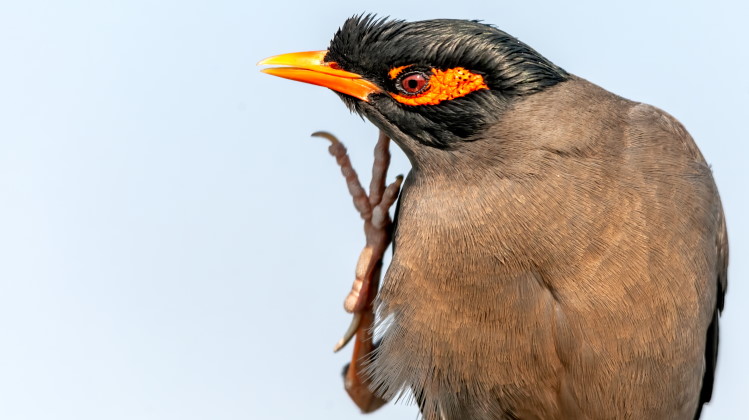 Feathers are of ultimate importance to birds.

And though they can be replaced, if they are to function properly they have to be kept in good condition.

There are two main activities involved in feather care: preening and bathing. And several minor ones including sunning and anting.

Individual feathers are frail things and birds spend a considerable amount of time caring for them. In many water birds the plumage (i.e., all the feathers) is waterproof.

In some species, this waterproofing is assisted by oil supplied by special glands ‘uropygial glands’. The birds apply the oil to their feathers during preening. This is an action you often see birds performing… and one which involves the bird using its bill to manipulate its feathers to ensure they are all zipped up and lying flat – one over the other, like tiles on the roof of a house.

In fact, practiced birdwatchers are aware that two of the most common activities you can observe in birds are preening and feeding/foraging.

Preening is the simplest and most common of feather care activities. It involves two different actions, nibbling and stroking.

All other feather care activities seem to be a prelude to preening, or at least end in a bout of preening.

Preening serves the function of returning feathers to their correct position and form. It often involves the addition of oil to the feathers from the Uropygial gland.

Wiping is simply wiping the feathers with the bill, pressing them into place and perhaps spreading some oil over them.

Nibbling is a more serious attempt to put the feathers back into pristine condition. The bird uses its bill to nibble along the edges of feathers straightening them out and ensuring the barbules are all zipped up.

Bird Bathing – The Prelude To Preening

Nearly all birds have been observed bathing and most are seen to do so regularly.

Some birds, like sparrows, simply splash a little water around at the edge of a pond or pool. Others, like robins, get deeper into the water, flick their wings open, spread their tail feathers and – at the same time – dip their head and shoulder under the water, throwing water back over their bodies.

Babblers simply jump into and out of the water source over and over again. While Kingfishers plunge down into the water and spread their feathers.

Swifts and swallows ‘flight bathe’ by flying so low over the water that they actually dip into the water for a very short time. Water birds also bathe and ducks and gulls can often be observed thrashing around in the water. Parrots bathe in the rain, while hornbills and other birds use the dew to have an early morning bathe.

Where water is scarce, birds use dust to bathe in.

This may seem silly at first… but if you think about it, a dry powder is easy to shake out of your clothes. But sticky plant resins or animal juices from prey items – and other organic wastes – are not.

By bathing in dust, birds can remove this sort of material – because each particle of dust absorbs just a little gunk before it is shaken off.

Cleaning is so important to birds, that sparrows on the desert edge have been observed to dust bathe in a bowl of sugar when no dust was available.

Whatever the sort of bathing used, it is only a prelude to preening – which is a constant job for a bird.

Birds in various climates all around the world indulge in sunning.

This can be anything from simply standing with their backs to the sun, with their feathers rustled up to expose the skin below, to a full sunbathing posture – with wings and tail feathers spread out to maximize the area open to the sun.

Some birds, such as pigeons, will position themselves one side and raise a wing to the sun. Whatever the exact action, like ‘smoke bathing’, the causes, or benefits to the bird are a matter of supposition.

Obviously, in many cases the birds get warmth from the sun, which reduces the amount of metabolic energy they have to expend in order to maintain a constant body temperature of around 40 degrees C.

However, some birds sunbathe in temperatures which are quite hot. In such circumstances, sunbathing appears to leave them over-heated as they can be seen panting.

Therefore, some scientists have theorised that the sun’s warmth plays an important role for the birds. Perhaps in helping dislodge feather parasites, or that the ultra-violet in sunlight helps turn some precursor molecule in the preening oil into vitamin D – and that the bird’s need this vitamin.

It is known that these precursor molecules exist in preening oil and that ultra-violet light will stimulate the conversion into vitamin D. What is not known is how well this happens on the bird’s body and how important the amount of vitamin D created would be to the bird.

Complex molecules such as vitamins are built up from various components and normally have a set pathway of changes they go through before becoming the final product.

This final product can later be a step en route to another molecule. In this way, our bodies build components out of a mechano-like set of basic units. A precursor molecule is one which is only one or two steps from a given end product.

Perhaps some of the strangest behaviour indulged in by birds is Anting.

Anting occurs in two different forms and for the sake of this post it does not always involve ants!

Most anting – however – does involve ants and over 250 different species of birds have been recorded displaying this behaviour at one time or another. Anting occurs either as “active anting”, in which the bird picks an ant up and applies it to its plumage – or “passive anting”.

Normally, the ant during active anting will be stroked along the feathers, usually the flight feathers. Starlings (Sternus vulgaris) actively seek out Formicine ants, which suggests that the ants’ ability to spray formic acid is an important consideration.

It has been observed – by many people – that during anting the birds appear to get exceedingly excited!

After the ant has been applied to the feathers, it is either discarded or eaten. Other active anting birds are Babblers, Tanagers and Weavers.

Passive anting involves the bird finding an ant nest and lying down among the ants.

This process – often likened to bathing in ants – is not as well studied as active anting. Birds which are passive anters include the European Jay, Crows and Waxbills.

Because life loves diversity, Blackbirds, Redwings and other thrushes exercise a flexible strategy. Being either passive or active anters, as the occasion – or some unknown need – takes them.

Strangest of all, perhaps, is the Grey Thrush of Japan which is a passive anter which goes throughout the actions of an active anter – but without any ants in its bill!

Finally, birds have also been observed to indulge in anting behaviour using objects that are not ants… such as mothballs and apple peel.

What Is The Explanation Behind Anting?

What actually happens during anting is easy to observe and record, especially as many birds will display anting activity in captivity if offered ants.

A more difficult question to answer is why.

In truth, nobody seems really sure what birds get out of anting. People have theorised that the ants help rid the birds of pests like feather mites and louse flies.

Other theories suggest that the anting is just a way of getting the ant to discharge its store of formic acid before eating it. The trouble with this idea is that it doesn’t explain passive anting. Scientific evidence supporting the pest control theory is hard to find.

However, it is known that ants are only eaten after they have discharged all of their acid. It is not unreasonable to assume that active anting – as we see it today – evolved from a detoxifying action to make ants edible, but gave the added benefit of pest control to some extent.

Nature often likes to perform several roles with one action – and though scientists like to understand the order of importance, and/or the order of origination, of an action – this is not always easy to achieve.

Perhaps related to anting, but even more bizarre, is ‘smoke bathing’.

Birds such as Rooks have been observed standing on smoking chimneys, with their wings spread open in a similar posture to some birds when anting.

Birds have also been seen to use smoking cigarette butts for anting!

On other occasions both houses and trees have been set alight by birds taking live cigarettes back to their nests. No-one really knows why.

Well, I hope this has given you a moderately comprehensive look at preening in birds!

Why not take the chance to learn a little more about bird migration while you’re here.