A definitive courtship is rare in fish.

In those fish that spawn in large groups, courtship is often minimal or practically non-existent.

A female will indicate her readiness to lay and this will be noticed by one or more males – who will attend by releasing their sperm (milt) as she releases her eggs. In the Common Carp for instance a female may be attended by 3 or 4 males.

In those species in which a courtship is evident, it is often indicated by the existence of morphological differences between the genders. These can be in the form of special adaptations in the male for the transfer of the sperm to the female (in those species where fertilization is internal). This includes all the Sharks and Rays as well as a variety of Bony Fish.

Apart from these functional differences, males may be differentially coloured and possess a variety of enlarged and distinctly-coloured fins, which serve as signalling devices to both attract females and warn away other males. 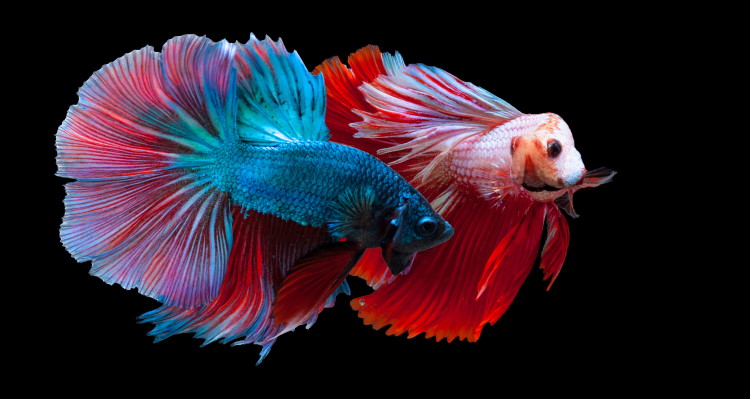 Some of the better known examples of this include many of the commercially popular Cyprinodonts such as Swordfin Mollies, and the equally popular Siamese Fighting Fish.

These secondary sexual characteristics (morphological adaptations possessed by and defining one gender of a species, but not directly related to sex – e.g., a beard) may be evident all year round, or they may develop at the beginning of the breeding-season and disappear after it is over. This is particularly true of the bright, vivid colours exhibited by some males.

Fish courtship proper is normally short and usually involves the male swimming around the female, showing off until he succeeds in stimulating her.

In some species, such as the Siamese Fighting Fish (Betta splendens), if the female is slow to respond the male may become aggressive. In species where there is a definite pairing during the breeding season, the female will signal her readiness to the male in some way – such as by quivering and/or adopting a certain ritualistic posture or position in the water.

The male will then display before her: raising and lowering his fins, rubbing against her, touching her with his fins and butting her with his head – until she is stimulated to release her eggs.

Most of the species that have a ritualised courtship live in fresh water. Not all species in which there is an observable courtship go in for in for any sort of post-fertilization care, although many do.

A marine species with an elaborate courtship is the Common Dragonet (Callionymus lyra). It is also an example of a species in which a complex courtship does not indicate post-ferilization care. As the eggs, once released, are left free to float in the sea.

Territoriality in fish often co-exists with courtship. Territoriality is most common in fresh water fish and those marine species that live in – and around – coral reefs and rocky shores.

While a complex and observable courtship ritual is less common that mass spawning, it should be noted that even in those species that aggregate on mass to spawn, it is not just a mad communal release of sperm and eggs.

What normally happens is that from within the huge school pairs, small groups of fish will suddenly separate out from the group – often rising to the surface, to spawn quickly and then return to the school. In this way, a brief courtship dance may be observed as the male guides the female away from the school. 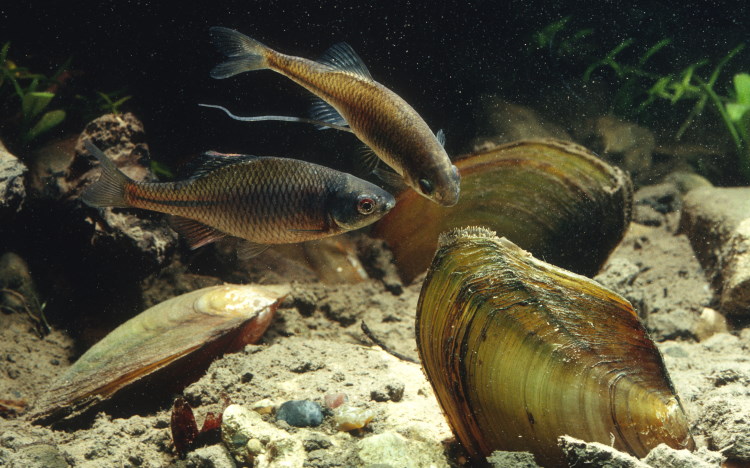 Bitterling male showing suitable swan mussel to female, where she will lay her eggs inside.

The bitterling (Rhodeus amorus) is an interesting example of a fish that is only territorial during the breeding season. The species breeds by laying their eggs into the gills of the Swan Mussel, where they are protected from predators until they hatch and leave the safety of the mussel’s shell.

Males set up territories, guarding access to Swan Mussels. During the breeding season, he develops reddish fins and an orange-yellow belly. The female however appears to be far more attracted to the swan mussel, than to the male Bitterling.

She will not produce the long ovipositing tube she uses to lay her eggs into the Swan Mussel’s gills, unless there is a living Swan Mussel present – regardless of the males beauty. Furthermore, she will produce the ovipositor (and even lay her eggs) when there are no males present.

Fish nest building occurs in a number of species.

Commonly these nests are relatively simple and created from the sand and gravel of the sea, lake or river bed – such as those made by trout and salmon.

However more complex fish nests exist. Perhaps the best known example is the Three-spined Stickleback, in which the male builds a nest of pieces of vegetation that he glues together with a secretion from his kidneys.

An example of a fish that builds a much larger and more impressive nest is Heterotis (Heterotis niloticus) of Africa. The fish nest is built with walls of vegetation and a floor of smooth mud. It is usually about 100 cm across and  with walls between 20 cm and 60 cm high and 15 cm to 20 cm thick. These walls project above the water level.

After spawning, the adult fish leave through a hole in the wall. But the male stays and guards the hole and then – when the young emerge in five days time – he guards them too.

Another extensive nest builder is the Aba (Gymnarchus niloticus), also from Africa. This electric fish builds a nest about 100 cm across. But unlike the last it is a floating fish nest. Again the sides rise above the water level and again the young are protected by one of the adults when they emerge. 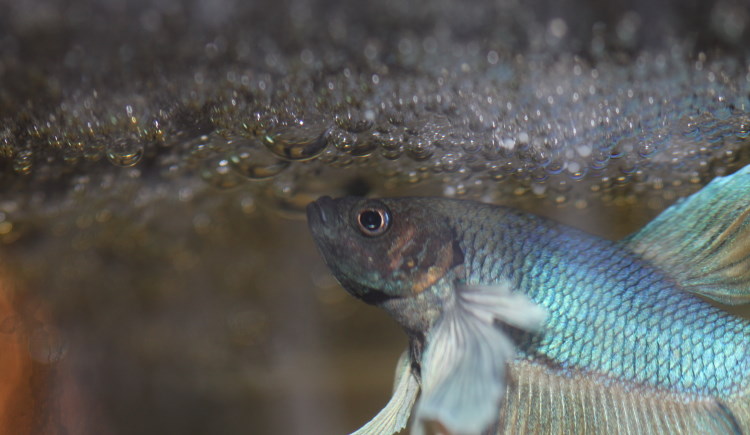 Another interesting method of nest building is the use of bubbles to create a floating nest (the bubbles are created in the fish’s mouth out of air and saliva).

In The Paradise Fish (Macropodus opercularis), the male builds a bubble nest then urges the female towards it. After spawning, he collects the eggs and inserts them one by one into the bubbles of the nest. The female can lay as many as 500 eggs. Then he stays and guards the nest. At least four, and maybe more, species in the genus Microctenapoma also build nests out of bubbles.

In those species in which the males build a nest, or maintain a territory during the breeding season, the males may undergo psychological changes as well as morphological ones –  in that they become more aggressive, particularly to con-specific males.

However ritualized bouts of physical confrontation can also occur. The males of several species of Mudskippers, common to the mangroves and mudflats of Southeast Asia, maintain territories and indulge in territorial battles that are easy to observe.

The individuals first display fins, but if neither is willing to back down, then physical interaction is inevitable. The opposing individuals line up face-to-face and open their mouths as wide as possible. Then they push against each other, in what looks like a kiss, until one or the other turns side on and looks away – signaling defeat. 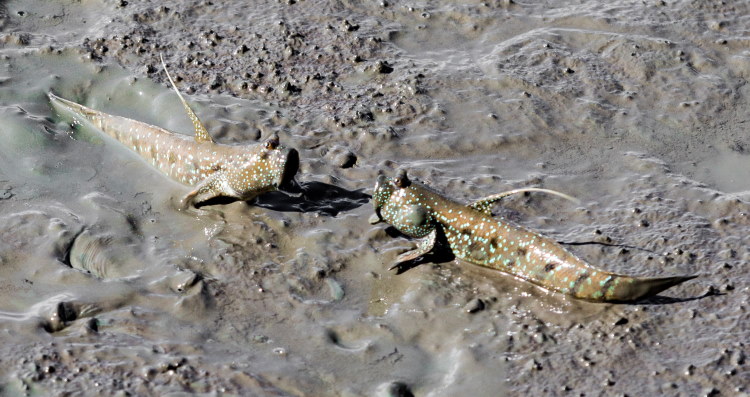 Fighting scene between Mudskippers in a mangrove forest

One of the exceptions to this rule of non-destructive and ritualized combat is, of course, the Siamese Fighting Fish. The males of this species, at least in the artificially well lit and spacially limited conditions of a fish-tank, will inflict considerable damage on each other.

Some Cichlids are also highly territorial fish and go in for territorial defense at a variety of levels of aggression. In the genus Haplochromis, physical fighting will occur between two males after only a short display.

Stepping down the aggression a bit, we find the genus Hemichromis in which the two males will only fight if they are obviously near equals – and only after an elaborate display.

Finally in the Genus Herichthys, we see that there is no actual fighting. However the ritualized intimidation displays may well continue until one of the contestants is defeated through shear exhaustion.

Well, I hope you enjoyed learning a little about territorial and aggressive fish. It is an area that truly deserves our most diligent study.

Perhaps now you’d like to know more about GMO fish.