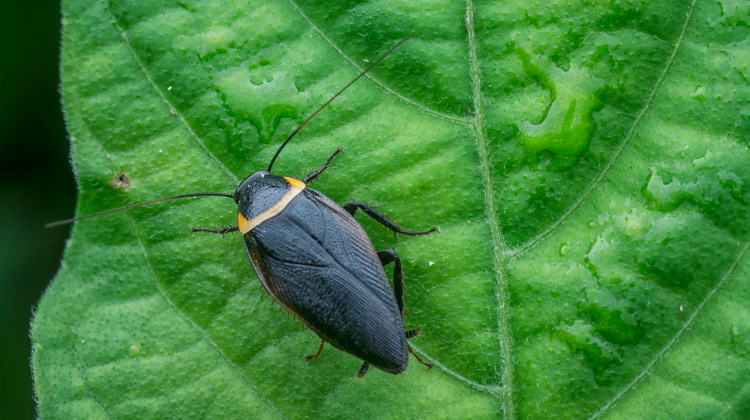 In the introduction to his book “The Cockroach Vol.1”, P.B.Cornwell’s opening sentence is:

“The Cockroach is probably the most obnoxious insect known to man.”

This is obviously the statement of a man who has spent too much time studying those few species of Blattodea which have so much in common with mankind, that they have chosen to live with us.

The rest are innocent members of the Earth’s fauna; some of which are clean living, non-aggressive and slow moving – and as such cockroaches make great pets.

The largest known Cockroaches in the world are Megaloblatta longipennis (largest wingspan, up to 18 cm); and Macropanesthia rhinocerus (largest body, weighing in at up to 50 grams, from Australia). The smallest known is Attaphilla fungicola which lives in the nests of Leaf Cutter Ants of the genus Atta in North America and feeds on the fungus they farm; it is about 4 mm long.

Cockroaches have been on the Earth for at least 250 million years and it is possible that, in the late carboniferous, cockroaches out numbered (in terms of number of individuals) all other flying insects.

Most Cockroaches are tropical in habitat and Britain has only 3 native species, which is less than the number of introduced species. Many Cockroaches are diurnal, though most are nocturnal. Many are forest floor species though some are cave dwellers; some are semi-aquatic, some burrowing, some wood boring, and some even make their homes in the nests of social insects (Attaphila fungicola in the nests of various Attine ants).

Blattodea are described as hemimetabolous insects with an oval, somewhat flattened head, partially concealed by the pronotum and with the mouth pointing backwards between the fore coxa.

The antennae are filiform (long and thin) and inserted below the middle of the eyes. The mouthparts are adapted for biting, chewing and licking; while the compound eyes are usually large and irregularly hemispherical, being wider near the vertex (the top of the front of the head). The forewings (tegmina) are usually hardened and often opaque; the hind wings are membranous.

In Cockroaches, except very small ones, the wings (in those species which have them) overlap in the middle of the abdomen, whereas the wings of beetles never overlap at all.

The legs are almost equal in length and depressed beneath the body. The abdomen has ten segments, but only 7 or 8 visible from above; while from beneath 9 plates (sternites) are visible in the male, but only 7 in the female. Males and nymphs carry 2 smaller appendages, thinner than and below the cerci (singular cercus) called ‘styles’.

The eggs are laid in an ootheca (nature’s answer to the polystyrene egg box). Some species will secrete these in the corners of the cage or – other accessible nooks and crannies – while others will carry the ootheca around with them; either inside or partly extruded from the body, until it is time for the young to hatch.

Blattodea Nymphs take between 4.5 and 15 months or longer to reach maturity, depending on the temperature and the availability of food. Females normally undergo 9 moults, while males normally take 13. Life expectancy ranges from 2 to 4 years and a female can produce 30 oothecae – resulting in 1,000 young before dying of old age.

Virgin females are known to produce sex attractants in P. americana and some other species. These can attract a male in as small amounts as ‘times 10 to the minus 14 micrograms’.

Courtship involves antennal sparring and the male raising and fluttering his wings. The female then feeds on the secretions of the male’s dorsal glands (situated on the upper surface of his abdomen). Following this, the male moves backwards under the female until he is able to clasp her genitalia from beneath. Once contact is assured, the two assume the more familiar end-to-end position; mating normally lasts about one hour.

Pycnoscelus surinamensis is not only parthenogenetic, and thus has no courtship or sex, but is also ovoviviparous – meaning that the ootheca is first extruded and then brought back into the female’s brood pouch for incubation.

Apart from Mankind, Cockroaches are eaten by a wide range of small mammals, birds, reptiles and amphibians. The Cockroach mite Pimeliaphilus cuniliffei feeds on all Cockroach life stages and can cause considerable damage to infested populations.

Mankind’s long relationship with Cockroaches probably began with the Cockroaches as food items. But the relationship really took off when Humans started storing food for the winter… and continued to improve, the better we became at creating artificially stable habitats (with plenty of food).

Ships were particularly prone to experiencing outbreaks of plague proportions, partly because they represented a predator free habitat. In 1634, Moffut in the first entomology book printed in Britain, records that Drake reported that the Phillip (which he had just captured) was overrun with ‘roaches.

Later in 1792, Captain Bligh was so determined to reduce the Cockroach numbers – that he disinfected the Bounty with boiling water.

Cockroaches are not associated with disease the way Fleas or Mosquitos are (i.e. by means of direct transmission). Instead – because they tend to inhabit those uncleanable areas of any establishment where they inadvertently come into contact with the microbial agents of decay – they inevitably bring some of these with them when they come to visit our food supplies. Thus contaminating them with often pathogenic organisms, which subsequently cause disease.

The word Cockroach possibly comes from the Spanish ‘Cucaracha’.

Like all creatures that bring themselves regularly to Mankind’s attention, Cockroaches have acquired a large number of common names; such as ‘lucifaga’ because of their habitat of fleeing the light. In Sweden they were known as ‘Brotaetare’ or ‘Bread Eaters’.

Further south in the UK, the various pest species have been called ‘Steambug’, ‘Steamfly’ and ‘Shiner’. While in America they are known as ‘Yankee Settlers’, ‘Croton Bugs’ or ‘Bombay Canaries’ depending on where you are.

The old phylum Dictyoptera has been discontinued, and Blattodea is now a fully recognized phylum.  The phylum Blattodea now includes the Isoptera.  This is now divided into three superfamilies (or suborders) Blaberoidea, Blattoidea and Corydioidea.  All three taxon contain true cockroaches, however the Blattoidea is mostly made up of the isoptera with only four families of cockroaches within it.

Want to know more about these wonderful creatures?

Then D. G. Gordon’s book The Complete Cockroach is all you have been looking for. It contains a wealth of information in a highly presentable form on this most beloved of animals. This is not a text book, but a book for everyone. Though it is highly accurate in its facts, it is written in a style that makes it pleasant reading for all.