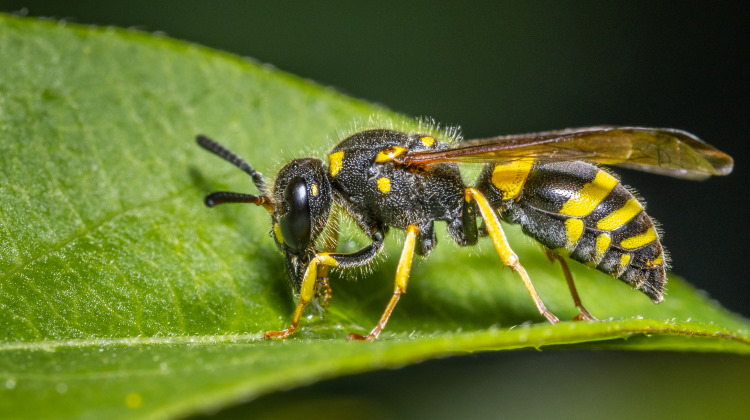 The Wasp paralyses its prey rather than killing it. This is so that the body will not decay before the larvae gets a chance to eat it.

If you get to look at them under a microscope, you will see another more taxonomically sound difference, i.e. Bees always have some (often many) ‘plumose’ or ‘feather-like’ hairs; these help in collecting pollen. Wasps always have only unbranched hairs, like you and me.

Solitary wasps can unofficially be divided into those which use a nest and those that don’t.

Those that don’t tend to paralyse their prey in relatively safe situations; i.e. Tiphia sp. which attack beetle larvae in the soil. As does Methocha ichnuemonides which preys on the larvae of Tiger Beetles (Cicindelidae) in their burrows.

These non-nest building wasps form a conceptual link between Parasitica like the Ichnuemon Wasps – which paralyze their prey where they find it, before laying their eggs in it – and those solitary wasps which do use a nest.

The general life style of a solitary wasp consists of a lone female mating and then preparing and provisioning one or more nests, each containing one or more cells with food for her young. The egg hatches and the larvae consumes the supplied food without ever leaving the cell. After pupation the new adults emerge and seek a mate, after which the males – being shorter lived in most species – die and the females go on to restart the cycle.

Solitary wasps can be divided into three different general types depending on how they acquire their nests:

Sphex ichneumoneus, the American Great Golden Digger can take between 15 minutes and 4.5 hours to dig a nest hole – depending on the soil she is digging in.

Species of Ammophila have only one cell per nest, but most wasps have more than one cell per nest – and many of them leave the nest open while they are foraging. This results in a lot of nests being parasitised by flies like Metopia argyrocephala, or being usurped by kleptoparasites such as Velvet Ants (Mutilidae) which are actually wasps not ants – and which specialise in laying their eggs in the nests of other solitary bees and wasps.

They also risk having their hard caught food items being pilfered by other solitary wasps.

For instance Passaloecus corniger provisions its nest with aphids stolen from the nest of other wasps working in the neighborhood, such as Passaloecus insignis and P. gracilis.

Most Sphecids, which prey on grasshoppers and Ammophilids (which prey on caterpillars), dig their nest before going out and catching the first prey item. But other Sphecids, such as Prionyx atratum and Pompilids catch their prey item first and then dig the nest hole – keeping a close eye on the prey item which they have cached nearby.

Though most species of Solitary Wasp are restricted (in terms of the prey they use) to one family, genera or species, a group of small wasps in North America called Microbembix have been recorded making use of 10 different orders of insects as well as other Arthropods.

They have even been observed to ‘catch’ already dead prey, or even bits of an insect such as a grasshoppers leg. Though to be fair, they have also been observed rejecting prey items as unsuitable after they have caught them.

Wasps generally carry their prey under their bodies (held in their legs) and sometimes the antennae are held in the mandibles. In many species, the prey is too large to be flown with and the female wasp walks back to nest.

Wasps have been recorded walking as much as 200 metres with a single prey item. Some species are very specific in how they carry their prey, for instance species of Ammophila always carry their caterpillars held upside down in the mid legs.

The prize for most unusual way of carrying its prey must go to the fly catching wasps of the genus Oxybelus such as Oxybelus sericeatus, which carries its prey impaled on its sting.

Any arthropods that are reasonably common make suitable food items for Solitary Wasp larvae. In practice, this means the major insect orders and spiders are the most commonly used. The following table is a list of some of the orders used by different groups of Solitary Wasp (it is not an exhaustive list by any means).

One of my favourite Wasps is the Bee Wolf (Philanthus triangulum). This amazing animal – which is mostly yellow in colour and about the size of a Common Social Wasp – digs a nest hole which is about 1 metre deep.

The hole goes down into the sandy soil at about 30 degrees for the first part, then it straightens out and continues on horizontally. Branching off sideways from this main tunnel are the up to 34 shorter but still horizontal sub tunnels, which contain the individual nest cells.

Because Bee Wolves tend to dig their nests into steeply sloping banks, or even cliff bases, the final cells are often many metres under the ground. The female Bee Wolf does most of the digging with her front legs, though she may use her mandibles to carry out small pebbles.

Philanthus triangulum is called the Bee Wolf because it feeds its larvae almost exclusively on Honey Bees (Apis mellifera).

The Bee Wolf uses between 3 and 6 Honey Bees for every cell. Thus a single Bee Wolf can account for well over 100 Honey Bees. However, as the average Honey Bee hive contains between 20 and 50 thousand Honey Bees, it would take a awful lot of Bee Wolves to do any serious harm to the local Honey Bee population.

After she has finished provisioning the cell, she lays an egg in it and seals it up with soil. The Bee Wolf eggs hatch in 2-3 days and start eating; it has a massive appetite and in about 2 weeks, it has eaten all the prey its mother left it. It then spins itself a bottle shaped cocoon with what would be the the mouth of the bottle glued to the back of the cell.

It has only recently been discovered that the Bee Wolf female tells its offspring which way to go when leaving the cell, so it will have an easy journey to the surface.

She does this by leaving a white substance on the ceiling of the cell – on the opposite side of the cell to that on which the newly eclosed (having just emerged from a pupa) Bee Wolf should start digging into in order to reach the passage that leads to the main corridor.

It has only just recently been discovered that this substance is made by special glands in her antennae. Bee Wolves are the only solitary hymenopteran that is known to give its offspring clues on which is the best way to get out of the nest like this.

The Bee Wolf larvae recognises this substance and – when it is making itself into a pupa – orientates itself, so that it will be facing the right way to dig when it comes out of its pupa next Summer.

Like many Solitary Bees and Wasps, the new generation never meet their parents – but start life off on their own with only their basic instincts to guide them. Fortunately their mothers leave them all they need to grow up into adults themselves, who can keep the cycle going.