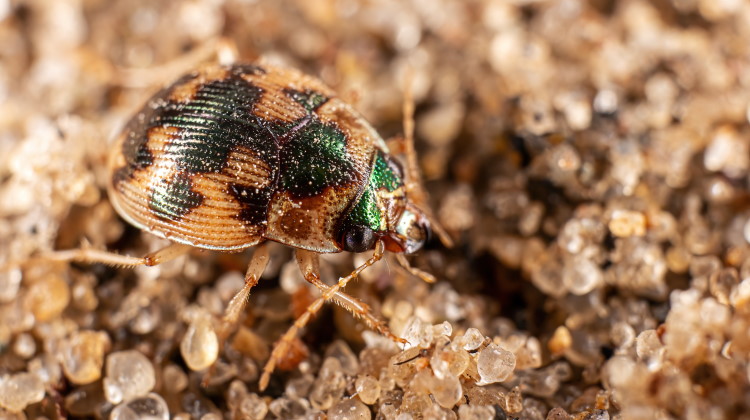 Ground beetles (Carabidae) are one of the largest and most successful families of beetles in the world.

They comprise more than 40,000 named species – most of which are found in the tropics. More than 30% of species are arboreal; though in general, temperate species are terrestrial.

Most are also flightless and predatory. Ground beetles arose in the early Tertiary. Britain has around 350 species, the largest of which is Carabus intricatus. This species is very rare and can be found only in a couple of places on Dartmoor.

Most Carabidae are omnivorous (feeding on both plants and animals) and polyphagous (being able to use a wide range of foods), feeding on live prey, carrion and plant material. Some species however are specialist feeders, i.e. Harpalus rufipes (the Strawberry Seed Beetle) on seeds, Loricera pilicornis (the Springtail Beetle) on Collembola and Abax parallelopipedus and Cychrus caraboides on slugs and snails.

Offonus species feed exclusively on the seeds of Umbellifers, this is known as spermophagy.

The larvae are always carnivorous if the adults are. Many Carabids find their food by random foraging, but specialist feeders tend to use chemical cues. Pterostichus cupreus has a two dimensional search pattern, until it finds an aphid at the base of a plant. Finding the aphid stimulates it to a three dimensional search pattern, i.e. it climbs the plant looking for more aphids.

Most species of Ground beetle are cannibalistic given the opportunity. Abax parallelopipedus is unusual in that it is not cannibalistic; it can often be found under rotten logs in woodlands.

In general the number of eggs produced depends on nutrition, environmental factors such as moisture, temperature, and the age of the beetle. Research indicates that Carabids in the wild seldom reach their reproductive capacity. As in most predators, egg production is related to food supply.

In the first year a female ground beetle will lay 5-10 eggs per female in those species with egg guarding behaviour, but up to several hundred in those that don’t. Eggs are laid all in one batch, as several batches per season; and in some species over several seasons.

Whilst in the second year far fewer (or no) eggs are produced. Some species lay their eggs individually on the surface of the soil, while others dig holes and lay their eggs in these before covering them over with soil. Some Pterostichini make a cocoon for the eggs and a few species dig nests with chambers and provide brood care – in the form of guarding the eggs and licking them to remove fungal spores (e.g. Harpalus sp.). The eggs normally take about five days to hatch depending on the species and environmental conditions.

Carabidae Larvae only use external digestion i.e. digestive juices are spat/vomited onto the food and the resulting fluid is then sucked up.

There are usually 3 life stages before pupation, however species of Harpalus and Amara have only 2 larval instars, while other species, particularly those which are ant or termite symbionts, have four larval instars.

Many species diapause (overwinter hibernation or summer aestivation). Generally development takes about a year from being an egg just laid to laying eggs, though it can take up to 4 years in harsh conditions, i.e. Carabus problematicus is univoltine up to 800 metres in height, but semi-voltine above that.

Other species such as Carabus auronitens are more flexible and adapt their life history strategy to the prevailing conditions. While Laemostenus schreibersi a cavenicolous species (living in a cave) can live for 5-6 years. Generally it is the larger species which live the longest. After it has finished growing, the larvae constructs a pupal chamber in the soil. Most species normally take 5-10 days to emerge from the pupae.

Agonum quadripunctatum, a forest species of ground beetle, is a good flyer and is attracted to smoke – whereupon it lays its eggs in recently burnt areas. Many polyphagous species such as Harpalus spp. like to live among crops. Amara plebja hibernates in woodlands over winter, but flies to grasslands to live and oviposit (lay eggs) in the spring and summer.

Depending on habitat, density fluctuates from 1-1000 per m2 at overwintering sites. More nocturnal (60%) than diurnal (20%) species occur in the UK. Nocturnal species are normally larger.

Forest beetles are generally nocturnal whilst grassland species are diurnal. But in such a large family, there is much room for variety e.g. Pterostrichus melanarius is nocturnal until August and then is mostly diurnal after this. In hotter areas the nocturnal habit is more common. Within a species population you can also have variety e.g. with Carabus auratus some are nocturnal, some are diurnal, and some have no diel preference.

Ground beetles suffer heavy losses in both egg stage and as larvae. This can reduce the cohort (that aspect of a population which is all the same age) by up to 96% mortality before it reaches adulthood. Moulds and desiccation are the primary egg killers, while dehydration, starvation and predation are the major causes of death for larvae and pupae.

40% of adult Bembideon spp. in a study in Norway were found to be parasitised, mostly by nematodes and fungi. It has also been shown that the heavy predation pressure of small mammals, experienced in many habitats, reduces both population numbers and species diversity.

Research (mostly in Britain) has shown that Carabids can be economically important predators of aphids in agricultural systems.

Or for information on the related family Cicindelidae, see the Tiger Beetle page.