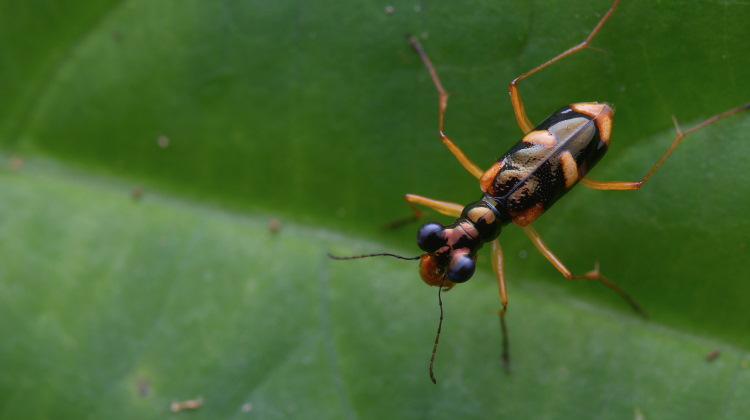 The Cicindelidae, or Tiger Beetles, are a common and popular family of Beetles (Coleoptera, Adephaga). They are a well established family dating from the early cretaceous. There are more than 1,000 named species, 850 of which occur in the genus Cicindela.

Tiger Beetles can be recognized by their having long sickle-shaped mandibles, long legs and large eyes in a head wider than the thorax.

The larva are all eruciform (catapillar like) and live in tunnels they construct in the various substrates that they live in. The adults of most species fly well.

Cicindelidae have a world wide distribution, with the exception of the Antarctic and Tasmania. Though Britain has only three species, other countries are much luckier particularly the warmer countries; North East India has 123 species. Most species are diurnal and actively predacious on other invertebrates. Cicindela campestris has been recorded running at 0.62 metres per second or 2.25 Km/per hr.

The eggs are laid in a hole in the soil and then covered up; or on the substrate, in which the larva will burrow.

The larva turns its egg chamber into a tunnel using its head as a shovel to push the soil from the hole, after loosening it with its mandibles. The holes can be as much as 200 cm deep by the time the larva has reached its final instar in some species.

The larva feed on passing insects, which they grab with their powerful jaws when they come within reach. They have special dorsal hooks on the 5th abdominal tergite (the plates that cover the top of the insect or its back; sternites cover the underneath or bottom) which help the larva to hang on and not be pulled out if its hole by large prey. The prey is eventually dragged to the bottom of the hole where it is eaten.

Tiger Beetles are fluid feeders and use what is called ‘pre-oral digestion’ i.e. digestive juices are secreted onto the prey while it is held and crushed by the mandibles, which possess a special molar-like tooth to aid in this mastication.

It looks like it is squeezing its jaws open and shut at the same time as it is sucking in.

Adults run and fly actively throughout the day. Most species rest at night hidden in safe nooks and crannies, but some species in South America such as Odontocheila sp. have communal nocturnal roosts.

Mating commences when the male approaches the female in a series of short sprints, he then leaps on to her back and clasps her thorax in his mandibles. Males may guard the females for as long as 12 hours after copulation, in order to stop other males mating with her.

Females have often been observed to touch the soil with their antennae – and even to bite it before digging a hole with their abdomen and laying an egg.

Though Birds, Ants and Wasps all take their toll of Tiger Beetle larva, their main enemies are Hymenopteran parasitoids. Members of the Tiphiidae in the genera Methoca, Karlissa and Pterombus are all specialists on tiger beetle larva. Adults are also taken by Birds as well as Lizards and Robberflies (Asillidae).

Well, I hope this has been an interesting introduction to the family Cinindelidae!

Perhaps now you’d be curious to learn more about the ground beetle.