What is Lichen and Why Are They So Lovable?

Lichens are some of the most amazing living things on this planet.

Often the first form of life to colonize a new area of rock, they occur all across the known world.

Lichens are commonly seen but also commonly overlooked. Any structure that has been standing for a reasonable amount of time is likely to be adorned with lichens.

Particularly, they are common on older buildings, stone walls, in graveyards and on most perennial (living more than 2 years) plants – particularly trees.

Lichens are inherently attractive… the more so the longer you observe them.

They are colorful – greens, greys, oranges and yellows are common colors. Cladonias often have bright red fruiting bodies, adding to their attractiveness. 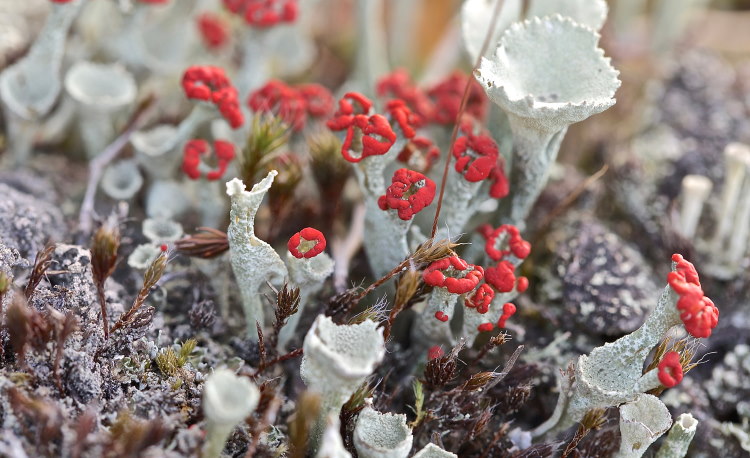 The real beauty of lichens, however, is in their intricate shapes and often three dimensional forms.

Lichens have many varied shapes or forms and quite a number of these are like a delicate, intricately patterned filigree. Often lichens remind me of fine lace work, except that they are more colorful!

It cannot be denied that lichens are amazing living entities.

Lichens first appeared about 400 million years ago, so they have been around for a long time.

Some individual species such as Hypogymnia physodes have been around for at least 25 million years and maybe for as long as 70 million years. Obviously the lichen symbiosis is a successful strategy! 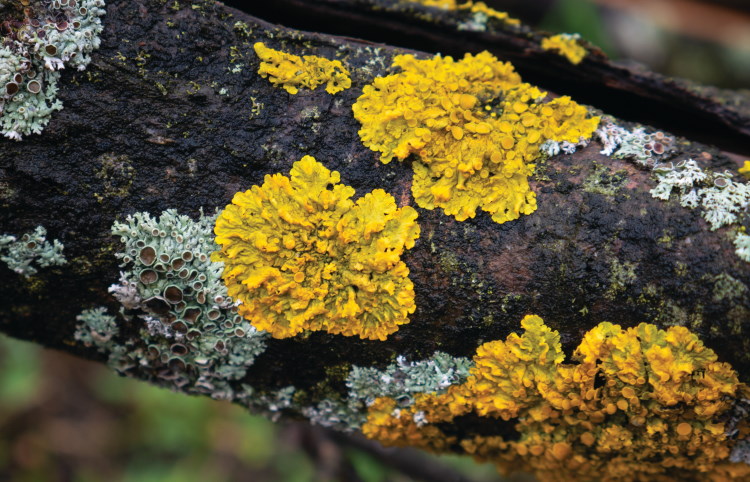 Lichens are also of great use to ecologists.

They store numerous minerals in their thalli – their presence and concentration is indicative of the composition of the rock that they are growing on.

And many lichens show a remarkable sensitivity to air quality. Some forms growing almost anywhere, others living in only the purist of atmospheres.

For many ecologists, lichens are an accurate monitor of the quality of the air in any given place. You can do simple experiments on this with your class, once you know how to identify a few species.

Compare the diversity of lichens on similarly aged members of a given tree species, at home, at school, in the local park and in the nearby countryside. Once you have the basic equipment, there is much that the amateur lichenologist can do.

Lichens are also useful as food, medicine, for making dyes, in perfume manufacture, as decorations and in science.

In Japan, Umbilicaria esculenta is considered a delicacy – where it is eaten as a soup or in salads.

Other Umbilicaria species are, or have been, eaten in other countries.

Some people believe that Lecanora esculenta was the original Biblical Manna as it has the habit of coming loose from its substrate (what it was growing on) and being blown around in the wind.

In the northern tundra, Reindeer and Caribou eat loads of lichens – mostly species of Cladonia and Cetraria. Lichens can make up half the food these animals consume during the winter, when they are dug up from below the snow by the hungry animals. 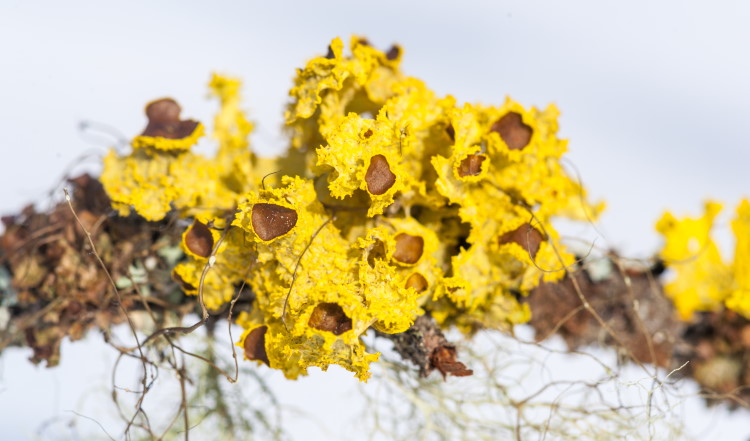 Eskimos and Lapps both harvest and store these lichens as part of the winter feed for their animals.

Nutritionally, lichens contain practically no fat and only 1-5% protein. They are basically carbohydrate. Deer have a special enzyme called ‘lichenase’ which helps them to digest the lichens that they eat.

Medical Use of Lichen

Medicinally Lichens have probably been used by many early civilizations.

In Europe, records from around the 15th century suggest that by then several lichens were in regular medicinal usage.

For example, Usnea florida was used for hair problems. Xanthoria parietina for jaundice and Pettigera canina as a cure for rabies. In some northern places, Cetraria islandica is still used as a cough remedy. 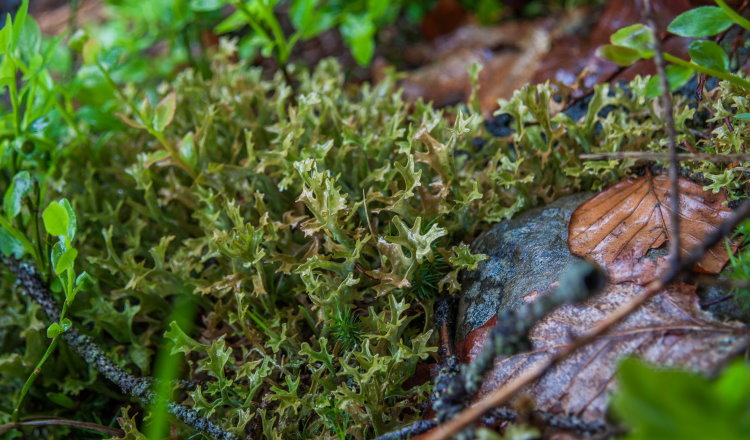 On a more scientific basis, Usnic acid is a known antibiotic and has recently been developed into a salve in Germany. Research is still active into the use of several other lichen products as anti-viral and anti-fungal agents.

In Mediterranean countries red and purple dyes were long made from species of Roccella. Other purple dyes used in the 18th century were made from Pertusaria corallina in France and Ochrolechia tartarea in Scotland. 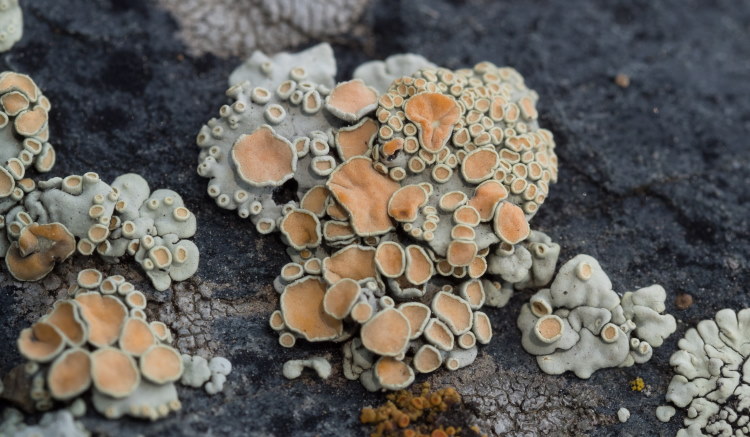 A brown dye has also been manufactured from Parmelia omphalodes.

Lichen dyes are still sometimes used for Harris Tweed – but the production of more modern dyes and ecological concerns over the amount of lichens harvested have pretty much rendered lichen dyes obsolete.

Lichens are still used in the perfume industry though.

It is estimated that around 9,000 tonnes of lichens are used this way each year. Mostly this is made up of Evernia prunastri and Pseudevernia furfuracea. 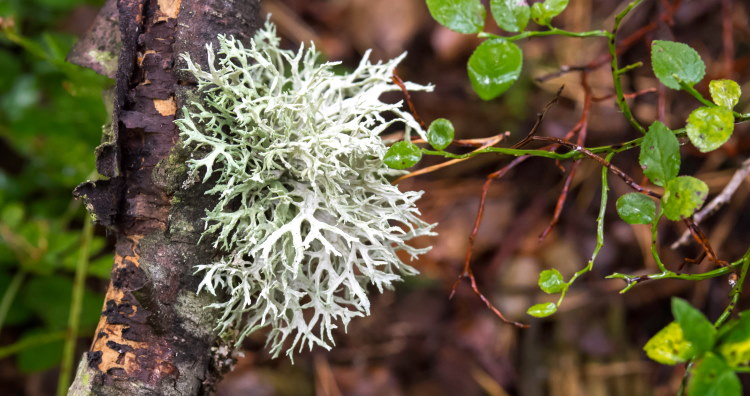 Lichens are also used as packaging materials by some florists and one study revealed that about 18,000 tonnes of Cladonia stellaris was exported from Finland to Germany and other European countries for this purpose.

What Is Lichen Exactly?

A lichen is a symbiosis.

That means it is two or more organisms living together, such that both are more successful within the partnership than they would have been if they were living on their own.

With lichens, the basic components of this partnership are:

The true nature of the symbiosis between these two partners is still being debated by scientists… and some would maintain that the fungus is a parasite on the photobiont. 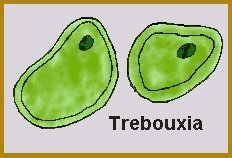 However, in many cases, the algae in question cannot survive alone in the habitat occupied by the lichen any more than the unattached fungi can – so it is not realistic to use the term parasite.

The fungal partners are mostly (over 95%) Ascomycetes. Most of the rest are Basidiomycetes.

As far as science has been able to discover, few if any of the fungi involved can survive and reproduce in the wild on their own. 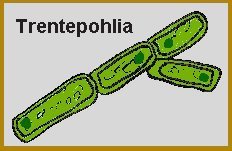 This classification is generally based on characteristics of the thallus and reproductive organs. There are between 13,500 and 17,000 species of lichen depending on whose classification you believe.

About 20% of fungal species are involved in lichen partnerships. The algal partners are far less numerous than fungal partners.

In other words, any given species of algae will probably form part of several if not many different lichens.

Many – if not all – the algal partners can exist on their own in some habitats. However, normally when part of a lichen they have a much greater distribution.

So you can see that when considering what a lichen is, the answer is not a simple one!

Who Benefits From The Lichen Symbiosis?

The fungal partner benefits by getting sugars, its only nutriment from the algae – which being green, synthesizes sugars through photosynthesis.

The algal partner gets protection, as the fungi normally forms the outer surface. This protection is mostly against the weather and results in the algae having a more stable and constant environment to live in, allowing it to grow better.

The fungi collects the sugars by means of special hyphae called appressoria or haustoria – which contact the wall of the algal cells.

The fungi may produce a substance which increases the permeability of the algal cell walls, such that the cells lose as much as 80% of the sugars that they produce. The sugars pass into the algal hyphae through diffusion.

This symbiosis is intriguing to many people and has been much studied – although it is not yet fully understood.

Types Of Lichens and Morphology 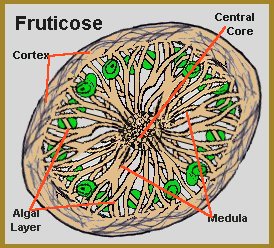 PinMorphologically, lichens are made up of a few distinct characters.

The most obvious is the thallus. The form of the thallus is a result of the fungal species involved. The thallus is the ‘body’ of the lichen. Most of what you see, if it isn’t reproductive structures, is thallus.

The fungal hyphae (filaments) branch and then fuse together (anastomose) when they meet to form a mesh of hair-like threads. 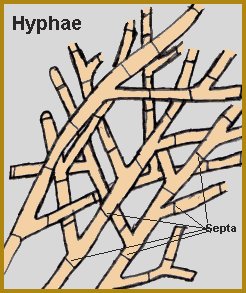 They consist of chains of algal cells wrapped with fungal hyphae.

Because nature was not designed to fit into our classification schemes, some things inevitably do not fit in. In lichens it is the genus Cladonia. 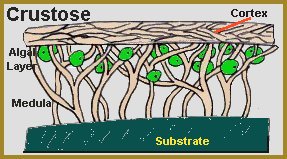 PinCrustose lichens, as their name implies, form a crust on the surface of the substrate on which they are growing.

This crust can be quite thick and granular – or actually embedded within the substrate. In this latter case, the fruiting bodies still rise above the surface.

In many crustose lichens, the surface of the thallus breaks up into a cellular, crazy-paving like pattern.

Crustose lichens tend to grow out from their edges and have their fruiting bodies in their centre. They are very difficult to remove from their substrates. 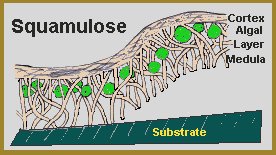 Squamulose lichens have a portion of their thallus lifted off the substrate to form ‘squamules’.

They are otherwise similar to crustose lichens in that they possess an upper cortex but no lower cortex. 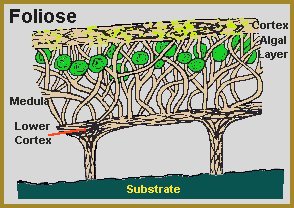 Foliose lichens have an upper and lower cortex.

They are generally raised to some extent above the substrate, but connected to it by rhizines (specialised root-like hyphae).

They are easier to remove from their substrate when collecting because of this. 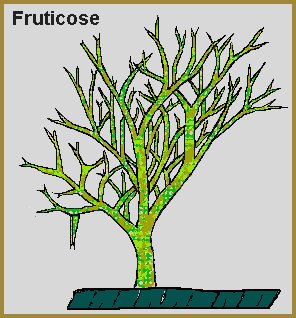 They are attached to their substrate by a single point and rise – or more usually – dangle from this.

Some foliose lichens can be stubby, like fruticose lichens. However, close examination will reveal that the algal part exists only on one side of the flattish thallus – whereas in fruticose lichens it exists as a ring around the thallus (even when it is flattened as in Ramalina sp.) 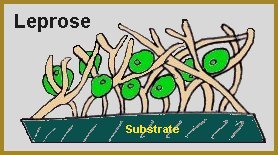 Pin
Leprose lichens are an odd group of lichens which have never been observed to produce fruiting bodies.

Because knowledge of the form of the fruiting bodies is essential to the identification of fungi, these lichens have not yet been identified properly… or at least not yet given full scientific names.

These fungi not only lack an inner cortex, but also lack an outer one. i.e. no cortex, only an algal cell layer and sometimes a weakly defined medulla.

Like many other living things on this planet, some lichens are suffering adversely as a result of the activities of mankind.

Mostly this is a result of habitat destruction, contributed to considerably by atmospheric and aquatic degradation.

In other words, the air and water are polluted. For organisms that live almost entirely on air and water, this can be quite disastrous. Although maintaining large areas of viable habitat through nature reserves and protection against damage is important, ultimately only purification of the air and water that surround us will bring lichens back to their full potential.

This will of course benefit every other living creature as well – particularly ourselves – and should therefore be a top priority for all thinking human beings.

Though the rarity of many lichens remains relatively poorly understood, some species are known to be endangered.

Two lichen species are protected by law under the US Endangered Species Act and a further 30 under the Wildlife and Countryside Act in the UK.

Well, I hope you have learned a little about all the different types of lichen. But there is so much more to learn!

Use the below links to check out our other pages about lichen: