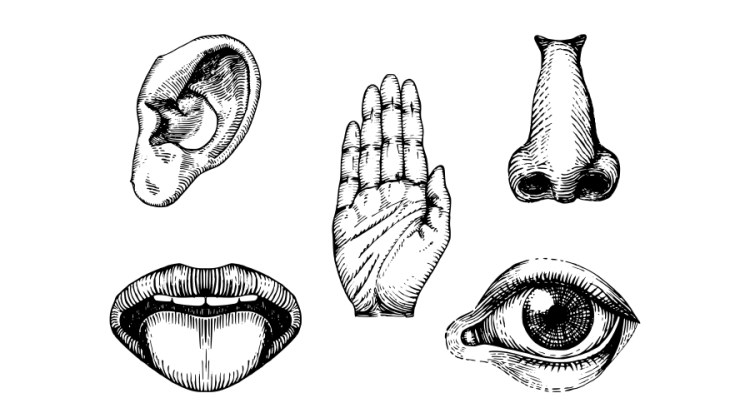 Like all living things, Mammals need to collect information from the world around them.

They need to do this in order to be able to respond to the world profitably. In other words, to live in the world, you need to perceive it and for this we have senses. The senses are traditionally described as coming in five flavors, however in some mammals there are actually more than five – as we shall see.

Our different senses work in different ways to gain us information about the world we live in. None of them are ‘the perfect sense’, but together they give us a pretty fascinating image of the world around us.

The five traditional senses are sight, sound, smell, taste and touch. Below is an introduction to and comparison of the uses of these different senses.

If the viewed object is moving, it can tell us much about the speed and direction of this movement as well as allowing us to identify it. For all this to happen we need to see it. This means our eyes have to be looking in the correct direction.

Light waves do not go around objects very well, so we can not see an object if it is hidden behind another object. This does put limits on what sight can achieve.

Sight is an easy sense to use because, during the day, we are surrounded by light supplied by the sun. This light bounces off things and brings us information about them. However, when the sun sets on a cloudy night the light is mostly gone and so vision becomes a lot less useful as a sense.

No mammals that I know of make their own light like bioluminescent fishes and a number of invertebrates do. This means that without an external source of light, they can not be seen.

To learn more about vision see the mammalian eye.

We can also hear things from all about us without having to move our head. Though our ear lobes do help focus sounds if we want to concentrate on one sound particularly.

Sound does not give as exact information on the source’s location as sight does. However it has the advantage of being able to supply you with information on objects which you can not see because something is between you and the source.

Sounds, like smells, generally works differently from sight in that they originate from a specific source and only tell us about that source. There are two exceptions to this rule, the first is echoes. Sound will give us information about an object when it bounces of it – and some blind people become very good at interpreting sounds and their echoes.

Echolocation involves the animal producing a constant stream of sound and detecting the echoes created by these sounds. This works best with small wavelengths of sound because they bounce off smaller objects rather than going around them.

For this reason, both Bats and Dolphins use very high pitched sounds called ultrasounds – these are beyond our hearing. This is still only sound though and does not count as a separate sense. The other extreme is infrasound. These are sounds so low we can not hear them. Elephants talk to one another in infrasound.

The second exception is where the sound encodes information, i.e. where it is used as a language.

Human language is very precise and complicated, capable of carrying large amounts of information. Other mammals have far simpler languages that may involve only a few sounds with variable meanings. However they still allow more information to be transferred from one individual to another than just a raw noise would.

The mammalian ear is a complex and amazing instrument. By adding the dimension of sound to our repertoire of incoming information it greatly enhances our lives.

The ear collects sound, transverse pressure waves travelling through the atmosphere, the water or even the ground and turns them into electrical impulses to send to our brains. Our brains then use this information to build up a sound map of the world around us, allowing us to respond to the beauty of a song or the urgency of a call for help.

The mammalian ear can conveniently be divided into three parts, the outer, middle and inner ears.

Smell is a very important sense to many mammals, more important than sight or sound in some cases and of roughly equal importance in many cases.

Smell is less accurate at supplying directional information than sound or sight, but has the advantage that it can pass information over time. It also works just as well in the dark and is silent.

An animal that scent marks its territory with its scent glands is giving information about itself to another animal that can still be received long after it has gone. In this way it can also give the same information to a successive number of individuals or groups without any further expenditure of energy.

The messages transmitted via smell can be quite complicated. Smell is particularly important in social and reproductive situations for mammals (see mammal reproduction).

Many mammals have a far better sense of smell than we humans.

Taste is closely related to scent, in that it works by detecting small amounts of molecules released from a source. It is primarily related to determining the edibility of an object.

Touch is normally restricted to close encounters and is important to many for mammals – particularly those which are nocturnal and live and/or hunt in tunnels or dense vegetation, such as cats and rodents. These animals tend to have well developed whiskers and guard hairs around their bodies.

Mammals as well as birds are renowned for being able to detect bad weather and earth tremors approaching. One possible explanation for this is that they pick up low frequency sounds produced in the air or the ground as a result of the turbulence approaching.

Magnetism, like light, exists around us all the time – so it would be very useful if we could detect it.

Some experiments conducted at Manchester University in England seem to suggest that human beings can use the detection of magnetic fields to orientate themselves.

Though as we do not use consciously, it may be an atrophying ability in us. A number of modern scientists also believe whales use the earth’s magnetic field to navigate with as they travel immense distances around the oceans.

Time is a more difficult question, but it seems reasonable to call it a sense.

Not all animals perceive time the same way. Humans have a minimum time span of about one twentieth of a second. In other words, the smallest differences in time our conscious mind can interpret is one twentieth of second.

This means that if something in front of us moves one inch to the left, then moves back again all in less than one twentieth of a second, we will not see it move at all.

Interestingly, people will respond to things subconsciously – such as images – that they haven’t seen consciously. This is why we can not see the wing beats of a fly as it flies – because each wing has gone up and down 12 or more times in the time it takes us to see any movement at all.

If this is difficult to understand, think about the cinema.

The film is a long series of still pictures run one after the other very quickly, yet to us it looks like continuous action.

The image at the start of this chapter is another example, it is an animated gif of the phrase ‘Time Flies’. However you cannot read it. This is because though the ‘T’ is there for a whole second every loop, the rest of the letters and the space are only present for 100th of a second supposedly (this is the speed I set it for but the actual time is much slower, something to do with the time it takes the browser to refresh each image).

However, even without knowing exactly how long each image is there, it is easy to see that you don’t pick all the letters up. You tend to get the ‘T’ an ‘m’ and an ‘F’ an ‘e’ and an ‘s’ if your eyesight is good.

Other animals perceive time at different speeds. Birds often can distinguish shorter periods of time than mammals, enabling them to sing songs with two or three times as many notes in them as we actually hear.

Our bodies metabolism is linked to a number of cycles, daily monthly and yearly (daily cycles are called ‘circadian rhythms’) these all involve a certain subconscious awareness of the passage of time.