Home
mammals
Mammal Teeth 101: A Look Inside The Different Types Of Tooth
Help us spread the word...
TwitterFacebookPinterest

Teeth are important things… without them, eating becomes a lot more difficult.

In mammals, teeth have reached their highest peak of evolution. Mammalian teeth are both more complicated and more efficient than in other vertebrates.

Teeth are heavy and require considerable muscle to operate efficiently. This has made an important contribution to the evolution of the mammal skull.

Mammals are heterodonts, which means some of our teeth are different. In fishes and reptiles, the teeth are all basically the same – some bigger than others but the same basic shape. Mammals needed their teeth to do several different jobs and so mammal teeth evolved into different forms.

Teeth are the hardest part of any mammal and therefore they are the part most often fossilized.

The number, size, organization and shape of the teeth are different in every species of mammal and can be used in taxonomy, especially of fossils. In fact without teeth, the fossil record would be much harder to understand.

Mammals have only two sets of teeth. The first set they get soon after birth, often called the ‘milk teeth’ and a larger set they acquire as an adult.

The larger set has both more and larger teeth to fill the larger jawbones. In all other toothed vertebrates, teeth just keep coming. No matter how many you lose, there is always another one ready to take its place. In other words, fish amphibians, reptiles and birds either have no teeth or numerous sets.

Teeth do not last for ever… like everything they wear out.

How fast they wear out depends on what the animal eats. Herbivore teeth in particular tend to where out at a specific rate. This is very useful for biologists, as it allows them to age an animal by looking at its teeth.

Therefore even a skull of a long dead animal can supply useful information by faithfully retaining the information on how old the animal was when it died.

Elephants, as you might have expected, have the largest teeth in the world.

An Elephant’s tusks are actually modified incisors. They arise from the upper jaw and only 2/3s of them are visible because they are deeply embedded in the elephants skull.

The heaviest pair of tusks, and therefore the heaviest pair of teeth, of any extant (still living species) animal belonged to an African Elephant Loxodonta africana shot in 1897. One of the pair was slightly larger than the other, but together they weighed 211kg or 465lb.

A single tusk from an unknown African Elephant weighed in at 117kg or 258lb Paris in 1900. This is the single largest tooth of a modern animal. 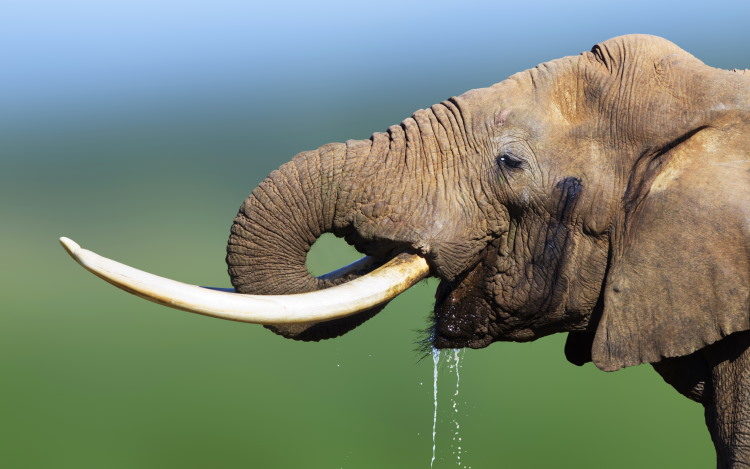 Prehistoric records also go to members of the elephant family.

The longest tusk ever found belonged to the extinct Palaeoloxodom antiquus germanicus, the Straight-tusked Elephant. On average this magnificent animal had tusks 5m or 16.5ft long.

The heaviest tusks ever known belonged to the Colombian Mammoth Mammuthus columbi, these weighed 226kg or 498lb. A single tusk from an unknown species that weighs 150kg or 330lb is preserved in a museum in Milan.

If the owner of this huge tooth had two approximately the same size, their combined weight would have been around 300kg or 660lb – and thus far more than the Colombian Mammoth mentioned first.

Apart from elephants, the tusks of Walruses can also get quite large-  being up to 1m long and weighing 5.4kg or 12lb. The canines of hippopotamuses can also be quite impressive.

Tusks aside, it is the African Elephant again who comes in as the winner in the largest teeth stakes. A bull African Elephant’s molars can be easily be more than a foot long and weigh 4kg or 10lb.

Which Mammal Has The Most Teeth?

The number of teeth in an animal’s jaw depend on its life history.

Teeth are expensive to grow, so no animal wants more than it needs. Most placental mammals are happy with between 20 and 40, while most marsupials have 30 to 50. As a general rule, animals that feed on insects have more teeth than either herbivores or the larger carnivores. There are some funny exceptions though.

Several groups of mammals have decided to do without teeth altogether.

The 10 species of Whales in the order Mysticeti, the 8 species of Pangolins family Manidae, and the 3 species of Anteaters in the family Myrmecophagidae and order Edentata have all given up on teeth completely and have none.

An interesting tooth oddity is the Narwhale Monodon monocerus, order Odontoceti. This has two teeth in its upper jaw. One of these, normally the left one, grows out long and forward as a tusk – while the other remains rudimentary. 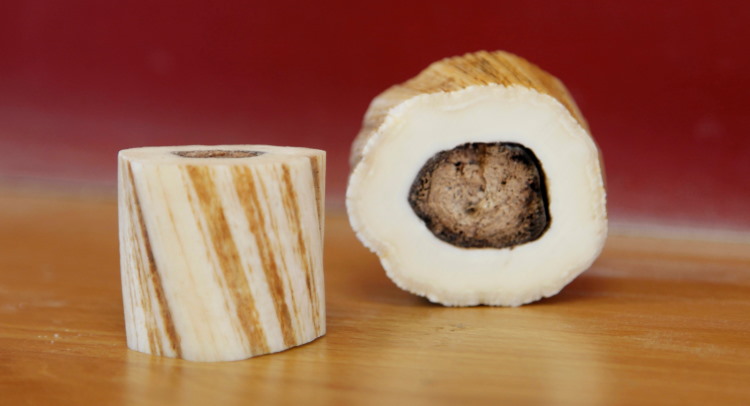 Tooth pieces from a narwhal – Tasiilaq in East Greenland.

Looking the other way to see who has the most teeth, we have to visit two of the 3 orders that gave us the mammals with the least teeth.

On land, the mammal with the most teeth is the Giant Armadillo Priodontes giganteus order Edentata – which can as many 100 teeth in its jaws.

In the oceans, the real master of teeth comes from the order Odontoceti. The Long-snouted Spinner Dolphin can have as many as 252 teeth in its long thin jaws.

These teeth are more like reptile teeth, in that they are all the same basic shape – thin sharp little spears. This makes them good for catching and holding the slippery little fishes that dolphins live on.

What’s Inside a Mammal Tooth?

They rest in a specially designed cavity in the bones of the jaw. And, at least while they are growing, they have a supply of blood and nutrients to them through their base.

The crown is the outside part of the tooth that is above the jaw bone, it is the part that does all the hard work. It is capped with an extra hard substance called enamel. The rest of the tooth is softer, but still harder than bone.

Beneath the enamel, making up the bulk of the tooth, is the Dentine and within the centre is the pulp cavity. Enamel is 96% mineral while the dentine is 70% mineral.

Teeth are seated in the jawbones and held in place by a special cement which is another form of bone. In the bottom of the tooth is a channel leading between the pulp cavity and the jaw bone, which allows blood vessels to access the tooth.

Most teeth stop growing once they reach an adult size and the cavity in the bottom of the tooth seals up. But some teeth, like the incisors of rodents, or the molars of sheep keep growing as they are worn down.

Not all mammals have all, or even any, of them and the roles any particular sort of teeth play in an animal’s life can be quite diverse.

The arrangement of teeth in any given mammals mouth can be expressed as a ‘dental formula’.

This dental formula gives the arrangement of one side of an animal’s jaw, such that incisors are always written first then canines then premolars and then molars.

Other mammals have different numbers of each sort of teeth in their upper and lower jaws. Hence Smoky Bats (family Furipteridae) have the dental formula 2123-3133 whilst Hyenas have 3141-3131 normally.

Incisors are the front most teeth in the jaw primarily used for the initial biting of food. They have a straight, sharp cutting edge and one root. In many Rodents, they grow continually throughout the animal’s life. This is because they get warn down gnawing through things.

Normally only 2 pairs (one each side) per jaw. Canines have a sharp, pointed edge and are used with the incisors to bite into food and or to kill prey. Like incisors they have one root.

The tusks of many animals such as pigs, hippopotamuses and walruses (but not elephants) are modified canines. They are missing in rodents and most large herbivores (Perissodactyls and Artiodactyls). The gap where the canines would have been is often enlarged and is called a ‘diastema’.

Next back from the canines. They are generally similar to molars in form and function in both herbivores and omnivores, but in carnivores some of them at least are slimmer and are used to cut flesh. When they (the first lower premolar and last upper premolar) are modified like this they are called the carnassials.

Otherwise premolars are teeth we use to crush and grind our food. Their upper surfaces have a broad, lumpy top instead of a sharp biting edge. These small irregular lumps are called cusps. Premolars are called bicuspids in some books. This is because (in most cases) they have two cusps, the prefix ‘bi’ meaning two.

Molars are larger than premolars and extremely variable depending on the animal’s diet.

Like premolars they are used for crushing and grinding food – and like premolars their upper surfaces have ridges called cusps on them. Molars normally have three to five cusps and two or three roots.

In humans we call the third molars, those closest to the back of the mouth, ‘Wisdom Teeth’. If the jaw bone is not large enough to accommodate all the teeth in it, as sometimes happens with humans, these wisdom teeth can become painfully wedged between the back of the jaw bone and the 2nd molars. This condition is known as ‘impacted wisdom teeth’.

Well, I hope this has been an interesting exploration of the (not so) humble mammal tooth!

Perhaps now you’d like to learn some more mammal facts.