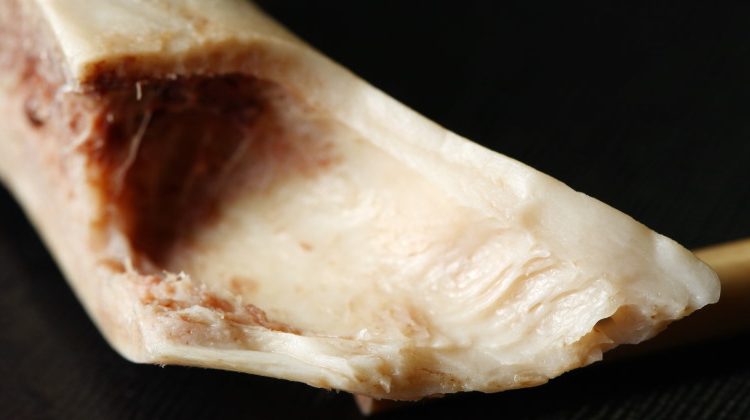 The Bones of Mammals

Bones are very important: they allow us to stand up and they gives us form and shape.

They also allow us to move. Without bones to support our limbs and to attach our muscles to, we would not be able to move at all.

So you can see, bones are fundamental to our lives, without them we would be soggy immovable blobs.

Bones are also important in our biochemistry. The major limb bones play an important role in the manufacture of blood (see mammal circulatory system) as well as supplying us with support and a means of locomotion (see mammal locomotion). 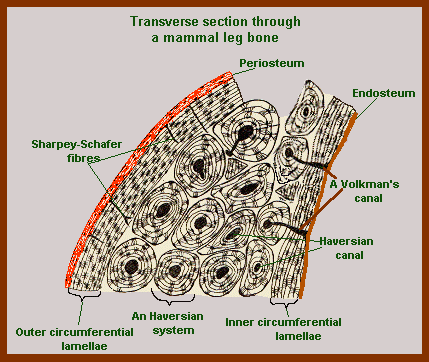 Bones are not dead, or finished structures. They are a living and growing part of any animal.

Mammal bone material may appear spongy ‘Cancellous bone’ or hard and solid ‘Compact Bone’, depending on how much empty space there is within the matrix.

The inorganic portion is a lattice of tiny (microscopic) crystals of hydroxy-apatite [Ca3(PO4)2]3.Ca(OH)2. As well as the main minerals of calcium and phosphorous, bones also contain sodium, magnesium, carbonate and citrate.

Mammal compact bone has several layers to it. On the outside is the Periosteum, then a layer of lamellae called the ‘outer circumferential lamellae’. The centre is made up of Haversian canals and their supporting lamellae. The inside is lined with another layer of lamellae called the ‘inner circumferential lamellae’, then outside of this is the Endosteum.

Bone arises or is created within a matrix of connective tissue (cartilage) as a result of the action of specific bone cells called osteoblasts.

Inside The Mammal Bone

The centre part of the larger round bones is hollow. The hollow centre is called the medullary cavity, it is filled with bone marrow.

Bone marrow comes in two sorts, either red or yellow. Yellow bone marrow is mostly fat. Red bone marrow is a partly fat but it is interlaced with a network of blood vessels, connective tissue, and blood-forming cells. It is in the Red Bone Marrow that the formation of Blood Cells occurs.

Mammal bone is an incredibly strong substance, like fibreglass it is good at surviving a variety of stresses.

However it does sometimes get damaged.

When it does, the body’s automatic bone healing mechanisms swing into action. The broken ends/parts of the bone will first be held together by a special callus – a poorly differentiated mass of new cartilage and bone.

This callus is like an internal bandage, it is gradually replaced by new structured bone material. This final process takes time, from a few weeks to about a year, depending on the size of the bone, the degree of damage, the location of the fracture, how much stress the regenerating bone is under and the patient’s age and health.

Joints occur where different bones meet. In some joints, the bones are very strongly linked together. There is no movement in these joints and the resulting pair, or group of bones, act as a single bone.

The skull is a good example of this. The places where the bones meet are called sutures and can often be seen as squiggly lines on the skull or pelvis. These sort of joints are called ‘Synarthrodial Joints’.

The joints between the various vertebrae in our back bones are called Cartiliginous joints. Like synarthrodial joints they remain pretty fixed, but they do have small degree of flexibility – or else we would not be able to bend our backs.

This flexibility is made possible by a series of thin cartilaginous discs between each pair of bones. Hence the term ‘a slipped disc’ referring to a back pain caused by one of these discs moving out of its proper place.

The amount of movement between any two vertebrae is not very great, but because there are so many of them it all adds up to us having quite a flexible spine.

In these joints, the two bones meet but are not locked together and considerable movement is possible.

Where the bones meet each other they have a special smooth, flatish surfaces called processes. These special contact surfaces are protected by cartilage as well as being very smooth. This stops them getting worn aware while rubbing (articulating) against one another.

These sort of joints are called ‘Diarthrodial Joints’ in some books and ‘Synovial Joints’ in others. The term synovial joints refers to the synovial membrane which surrounds the fluid filled cavity around the joint. This cavity, and a layer of hyaline cartilage, separates the two bones so they do not actually touch each other.

Diarthrodial or hinge joints come in several several different forms, depending on how they work.

Shoulder and hip joints have the greatest degree of movement. These are ball and socket joints and allow us the great freedom of movement we have in our limbs.

Knee and Finger joints are hinge joints and have less freedom of movement, but are still pretty efficient. The joint between the Axis and Atlas bones of the neck is different again. This is called a ‘pivotal joint’ because one bone pivots or turns on the other.

The elbow is a mixture of both a hinge and a pivot joint. While in our wrists and ankles the various bones slide over one another so this is called ‘gliding joint’.

Well, I hope this has been an interesting look inside mammalian bones.

Perhaps now you’d like to know something about mammal teeth.