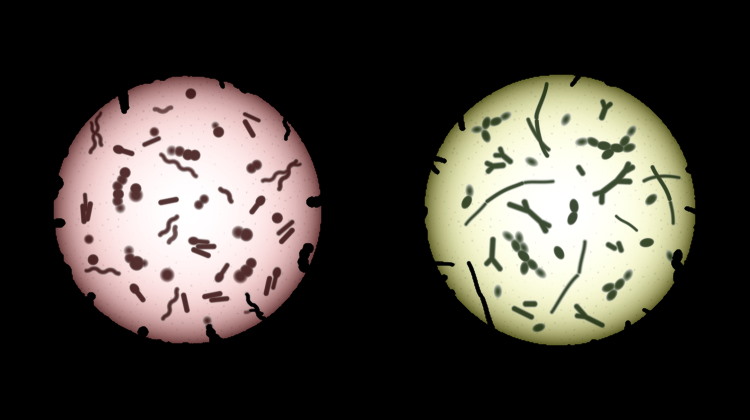 The taxonomy of bacteria is not very definitively worked out yet.

Especially the higher levels of classification.

Some authorities believe that the degree of variance between different bacterial groups is sufficient to give them each ‘Kingdom Status’ of their own.

Thus in the 9th edition of “Brock: Biology of Microorganism” you will find reference to 13 Kingdoms of Bacteria.

From the point of view of these pages, it is not really important whether you think of the different categories as Phyla or Kingdoms – as long as you are aware that the bacteria are an incredible diverse group of organisms.

Here I have followed the classification scheme laid out in the 2nd edition of “Bergey’s Manual of Systematic Biology”.

No article about bacteria classification would be complete without a note on gram staining.

Staining methods are designed to make a staining agent bind to the cell wall of the bacteria. The Gram staining method is named after Christian Gram, who invented the method in 1884.

You will find bacteria referred to as ‘Gram +’ (Gram Positive) and ‘Gram -‘ (Gram Negative). This is a reference to how the bacteria responds to the Gram staining method.

In testing for gram stain response, microbiologists first spread some bacteria on a slide, then ‘fire it’ by passing the slide briefly through a flame.

The next step is to flood the slide with crystal violet solution for 1 minute.

Then they add iodine solution for 3 minutes – at this stage all cells are purple.

Lastly, the cells are restained with safranin.

This results in gram positive cells remaining purple and gram negative ones being red or pink. Gram staining is nearly always the first step in identifying a new sample or species of bacteria. Nowadays, gram staining can be done in one step using a fluorescent dye and a fluorescence microscope.

Anyhow, look through the list below to see how bacteria has been classified by taxanomists.

This means they derive their energy from inorganic molecules and they live in hot environments.

Members of the genus Aquifex can live at temperatures as high as 95 degrees C and they have an optimum growth temperature of 85 degrees C.

Aquifex is an aerobic bacterium, but it can only tolerate low quantities of oxygen. Most of the rest of the phylum are anaerobic and cannot tolerate the presence of oxygen at all. Aquifex utilizes H2S or S2032- as its energy source.

Thermodesulfobacterium is another member of this group.

As its name suggests, it is a sulphur reducing bacterium, reducing SO42- to H2S. Thermodesulfobacterium likes it a little cooler than Aquifex, having an optimum growth temperature of 70 degrees C – and it is anaerobic.

This group comprises a number of aerobic chemoorganotrophic bacteria.

The two best studied genera are Thermus and Deinococcus.

Thermus is a thermophilic bacterium. The enzyme Taq DNA Polymerase comes from Thermus aquaticus. This is the major enzyme used in Polymerase Chain Reaction (PCR) techniques for amplyfying DNA.

The best known Deinococcus species is D. radiodurans, so named because of its incredible ability to survive high does of radiation. D. radiodurans can survive 30,000 Gy of ionizing radiation (1 Gy =100 Rad).

A human being can be killed by less than 5 Gy – making D. radiodurans 6000 times better at surviving radiation than us!

This is a small phylum of chemotrophic and autotrophic bacteria.

Thermomicrobium is unique, in that its lipids form neither ester linkages like other bacteria, nor ether linkages like the Archaea and the Eukaryotes. This is because the lipids are made up of 1,2-dialcohols instead of glycerol.

Chloroflexus is an inhabitant of neutral to alkaline hot springs, where it often forms thick mats.

Photosynthesis is carried out via bacteriochlorophyll a. Interestingly, Chloroflexus spp. can also grow in the dark by means of chemo-organotrophic respiration.

Chloroflexus is an ancient genera with a photosynthetic metabolism that is part way between that of the Purple Bacteria and the Green Sulphur Bacteria. Some scientists think Chloroflexus may be one of the earliest photosynthetic bacteria.

This is a small phylum of 17 species, sometimes referred to as Green Sulphur Bacteria.

Chlorobium tepidum is a thermophilic species which forms dense microbial mats in hot springs with a high sulphide content.

Some species in this group have the interesting habit of ‘consorting’ with other larger non-phototrophic bacteria. Normally between 12 and 20 Chlorobium spp. will be in consort with a single non-chlorobium cell.

These aggregations are called ‘consortia’. They are more than just casual groupings, because both the Chlorobium and the non-chlorobium cells divide at the same time. Scientists do not yet know the ecological significance of these ‘consortia’.

Chlamydiaceae is the smallest of the the two families in this phyla, containing only 3 species – all in the genus Chlamydia.

All three are obligate parasites of warm-blooded animals; C. trachomatis and C. pneumoniae of humans and C. psittaci of birds and occasionally mammals, including humans. All are pathogenic.

C. trachomatis causes trachoma, the leading cause of blindness in humans, as well as otitis, a non-gonococcal urethritis, urethral inflammation, Lymphogranuloma venereum and cervicitis.

This is another small but distinct group of bacteria.

They are unique because of the stalk that they produce, which unlike that in Caulobacter, is made of protein.

They are also interesting because they are budding bacteria. The stalk is believed to be used as a means of attachment to substrates. They are primarily aquatic aerobic chemoorganotrophs.

There are 4 genera and 10 species; Pirellula, Planctomyces, Gemmata and Isophaera a gliding filamentous form. Little is known about the ecology of any of these genera.

Spirochetes are a distinct group of bacteria.

They are gram negative and most of them are tightly-coiled, long and slender in shape. They have one or more flagella (up to 100) at each end of their cells, which when rotated allow them to move.

There is a great diversity of size within the spirochetes and the larger species can be 0.25 of a millimetre long while being only 0.00075 millimetres in diameter, I.e., Spirochaeta flicatilis.

Members of the genus Spirochaeta are common in ponds and lakes.

Some species are endosymbionts of animals such as termites. The genus Cristispira contains only one species which lives generally within the ‘style’ of molluscs such as clams and oysters.

The genus Treponema contains one of the few spirochetes to be pathogenic to humans, T. pallidum – which causes syphilis in humans. T. denticola, T. macrodentium and T. oralis all live in the human mouth where teeth and gums meet.

Other species of Treponema such as T. saccharophilum are commensals in the rumen of cattle.

Leptospira and Leptonema are two aerobic genera of spirochetes.

Leptospira interrogans is an internal parasite of mammals. It is normally found in rodents but can infect both humans and dogs. In humans it most commonly causes leptospirosis, a disease of the kidneys which can be fatal.

The genus Borrelia contains the most pathogenic of the spirochetes and most species in this genus are parasites in animals.

Borrelia recurrentis causes relapsing fever in humans, it is commonly transmitted via the body louse.

Borrelia burgdorferi causes Lyme disease, which is transmitted by ticks.

B. burgdorferi is of interest scientifically because it is one of the very few exceptions to the rule that ‘bacteria have circular DNA’. In other words its DNA is linear, a characteristic normally only seen in Eukaryotes.

With 130 species in 20 genera this is the third largest phylum of bacteria.

It contains a variety of physiological types, including both obligate aerobes and obligate anaerobes.

The genus bacteroides mostly consists of commensals living in the guts of animals and as such are obligate anaerobes. They are probably the most common bacteria in the human large intestine where 1010 to 1011 cells can occur per gram of faeces.

Some species can also be pathogenic causing gastrointestinal disorders.

The genus flavobacterium contains primarily aquatic species, though they are also found in food processing plants.

F. meningosepticum is believed to be a cause of infant meningitis.

The genera Cytophaga and Sporocytophaga are long gliding rods in form.

They are widespread soil species, with the habit of attaching themselves to cellulose strands before digesting them.

Both genera are obligate aerobes and are ecologically important as cellulose degraders in aerobic environments.

The Fusobacteria is a small phylum of bacteria, most of which occur in the genus Fusobacteria.

Fusobacteria are filamentous bacteria which are secondary colonists on the dental plaque on your teeth – after it has been formed by species of Streptomyces.

Thus thickening and reinforcing the bacterial attack on your teeth.

Well, I hope this page has been useful to you in your search for information about bacterial classification.

You may navigate to more information about particular phyla by clicking on the names in the table above.

Otherwise, perhaps you’re in the mood for some bacteria facts?