The Anatomy of a Bird – Bone, Blood & Guts

The anatomy of birds is different to that of most mammals, in a number of immediately obvious ways.

First, they walk on two legs and have two wings.

Then, they have feathers instead of hair… and a beak instead of jaws with teeth.

But they are also similar to us in some ways.

They are warm blooded with a normal body temperature of around 40°C, several degrees warmer than most mammals. They also have two eyes and two ears, though these are not normally visible.

Most birds have little or no sense of smell. Birds have also had to evolve a compact body shape in order to facilitate flying. All the major skeletal differences between birds and their reptilian ancestors are a response to the requirements for flight. 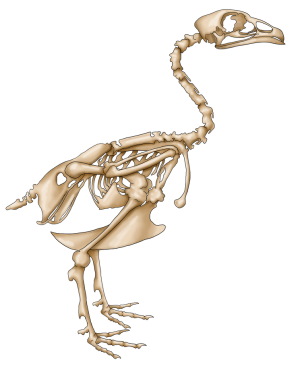 All birds have the same basic plan.

Though different life styles have meant that they have evolved different variations on the central theme.

Birds such as swans have more vertebrae in their necks than those like parrots, who have very short necks. Swans have 25 vertebrae, parrots have 9.

Necks are useful for getting your mouth to places you do not really want to take your whole body – like the bottom of a pond!

They are also useful for turning your head – when your eyes are fixed deep in sockets – without having to turn your whole body.

The exception to this rule are penguins who effectively fly through the water with their modified wings and still need large muscles to power them.

The basic bird skeleton was inherited from their reptilian ancestors. The constraints of flight however have meant that birds have had to modify it in several major ways.

Flight means lifting the birds weight, so the first major consideration is reduction in weight. The lighter you are, the easier it is to fly. The main ways birds have lost weight is through the loss of teeth and the large jaw bones needed to support teeth. Plus the loss of nearly all the tail and a reduction of the skull.

Though a bird’s major limb bones are hollow, with internal struts for support – this makes them stronger not lighter. A bird’s leg bones for example, are often heavier than those of a similar sized mammal or reptile.

The flapping of wings to achieve flight requires huge muscles… and these muscles need to be solidly attached to the bird’s skeleton. They also to generate tremendous stresses in the skeleton when working.

A bird gets around the first problem by having a greatly enlarged sternum, sometimes called a keel or carina – which we call the breast plate.

This is missing in certain flightless birds such as the ratites (Emus and Ostriches etc.)

It is also missing in Archeopteryx. However scientists believe that in the ratites, the sternal keel has been lost as a result of the birds having adopted a flightless life style. Whereas in Archeopteryx it had not evolved yet.

The second problem is overcome by adding rigidity to the skeleton of the bird.

The rigidity has been achieved by fusing groups of vertebrae, fusing the two collar bones to make what we call the ‘wishbone’. And by the addition of special lateral (sideways) growths on the ribs – which rest against the next rib back and thus strengthen the whole ribcage.

These extensions are called uncinate processes .

A bird’s thorax is squat and compact in comparison with most other vertebrates. This brings the operation of both the legs and the wings closer to the centre of gravity, allowing them to work more efficiently. This also gives a bird a better balance, important in both flight and bipedal (two legged) locomotion.

To keep their centre of balance when walking, birds have evolved to have their equivalent of our thigh held permanently close to the body.

The leg does not start to extend out from the body until after the knee joint – which is never seen. The backward bending leg joint – that you see in bird’s legs when they are walking – is the equivalent of our ankle.

The stresses involved in landing and taking off, in running and in hunting – mean that a variety of birds have relatively heavy and strong leg bones.

Large raptors such as Eagles kill their prey with their feet and carry the prey considerable distances.

When you look at the skeleton of an Eagle, it is surprising how large the legs are.

Ratites (Ostriches, Rheas and Emus) are large birds which run, rather then fly, to escape predators. This means that they have been able to develop large heavy leg bones.

The fundamental bones of a bird’s leg are the femur, fibula, tibiotarsuss and tarsometatarsus. These are also called the femur, tibia and tarsus respectively, in an external view of a bird’s anatomy.

Most birds have four toes.

The first points backwards in most species – and consists of a small metatarsal and one phalanx (toe bone). The second, third and fourth digits (or toes) are counted from the inside of the foot out… and have 2, 3 and 4 phalanges respectively. The fifth toe is lost completely, except in some birds where it has become a defensive spur – such as the chicken.

The exact number of toes and their arrangement (as well as their proportions) varies from family to family – with Ostriches having only 2 toes, whilst Rheas and Emus have three.

The foot is a very important appendage for a bird, being the only source of support when standing, walking and running on a variety of surfaces.

A bird’s feet are also its means of propulsion in aquatic species. A major weapon in many predatory species. And for some birds, their equivalent of a hand – functioning to grasp and hold objects the bird wishes to manipulate, mostly during feeding.

The size and shape of the claws, the way the toes are arranged  – as well as the length of the toes and the degree of webbing – are all dependent on what a bird uses its feet for and where it lives.

Like a bird’s bill or beak, its feet reveal a lot about its lifestyle. Many birds have three toes forwards and one back. Others have two forward and two back.

Ducks, Geese and Swans all have medium length toes joined, together by a web of skin to make an excellent paddle for rowing themselves through the water.

They spread the toes on the back stroke, to maximise the push. Then hold their toes together on the forward stroke, in order to reduce resistance.

Jacanas have extra long toes, to help spread out their weight as they trot across the Lilly pads. Swifts have two toes that can be facing forward or backwards – as opposed to the first two – as needed.

Here are some pictures of bird’s feet to demonstrate what I have said above.

Like the leg, the bones of the bird’s wing are recognizably evolved from a basic plan – that can be found in all vertebrates, including mankind.

The bird wing consists of a humerus – which at one end is attached to the main thorax via the scapula – and at the other end to both ulna and the radius.

Note, that like us, birds have two bones in the lower part of the limb. The rest of the wing is composed of modified hand bones. The carpometacarpus, like the tarsometatarsus in the leg, is elongate forming the basis for the third major section of the bird’s wing.

The first digit is small, comprising 2 phalanges – and arises from the carpometacarpus just out from the joint with the ulna. It supports the Alula.

The second digit is again comprised of 2 phalanges. In this case larger and flatter, as they extend the wing and support the primary flight feathers – as does the carpometacarpus and the Ulna. Flight feathers originating along the humerus are called secondaries.

The third digit is very small. It arises, like the second, at the distal end of the carpometacarpus and also helps support the primaries . It consists of only one phalanx.

Distal = furthest away from the body. Proximal = the closest end of a limb to the main trunk of the body

The fourth and fifth digits of the hand have – like the fifth of the foot – been lost completely in birds. Another weight saving feature.

Other Parts Of The Bird Anatomy

We hope you’ve learned a bit about overall anatomy of the bird – and it’s skeleton, wings and feet! See if you can observe these features out in nature with your binoculars. If you are new to bird watching, you might want to see our recommendations for the best bird watching binoculars.

Now you can learn more about the other parts of birds: