Home
fish
Fish Evolution 101: From Agnathans To Placoderms And Beyond
Help us spread the word...
TwitterFacebookPinterest
The Evolution of Fish

While we know that the evolution of vertebrates had its first great successes with fish, it is still – in many ways – poorly understood by scientists.

It is now generally accepted that the first vertebrates arose about 550 MYA (MYA = Million Years Ago).

These animals, our very distant ancestors, were extremely different to the fish we know today. They were called Agnatha, meaning ‘without jaws’. There are still some species of fish living today that have this feature, a lack of jaws, and which are therefore part of this group.

The term Agnathan unites all the extinct, and the extant (still living) jawless fishes. Without jaws means they had no bones in their mouths and they could not bite the way modern vertebrates do. They did eat however and they did have mouths.

Even the earliest Agnathans had recognisable heads, with a brain of some sort, two or more eyes and a notochord persistent throughout their lives. They had no teeth (though modern Agnathans do) and no pelvic fins.

Despite all these set backs, in the primitive, invertebrate dominated seas of the Paleozoic (570 – 245 MYA), the Agnathans and their ancestors were a very successful group. With many species arising and a number of different subclasses.

Many were small, worm-like animals which resembled the modern Hagfish and Lampreys. Others evolved a strange variety of bony plates, armour to protect themselves, and reached lengths of 1.5 metres (5 ft). Fossil Hagfish and Lampreys have been found dating back to 350 MYA. However scientists believe they evolved before the Conodonts, whose armour shielding resulted in them fossilising much more readily.

Among the better known ancient Agnathan fish are the Ostracoderms, so named because of their external armour.

Of these, the earliest are the Conodontia. The Conodontia were small, generally less than 7 cm (3 ins) long. They possessed teeth on their oral ring, a tongue and a caudal fin. However, they had no internal skeleton. They first appear in the fossil record about 515 MYA and disappear again about 205 MYA.

Two other groups of jawless fish appeared shortly after them: the Arandaspida at about 495 MYA and the Astraspida at about 450 MYA. Both these groups had large head shields and no fins except the caudal fin and both became extinct by about 440 MYA. 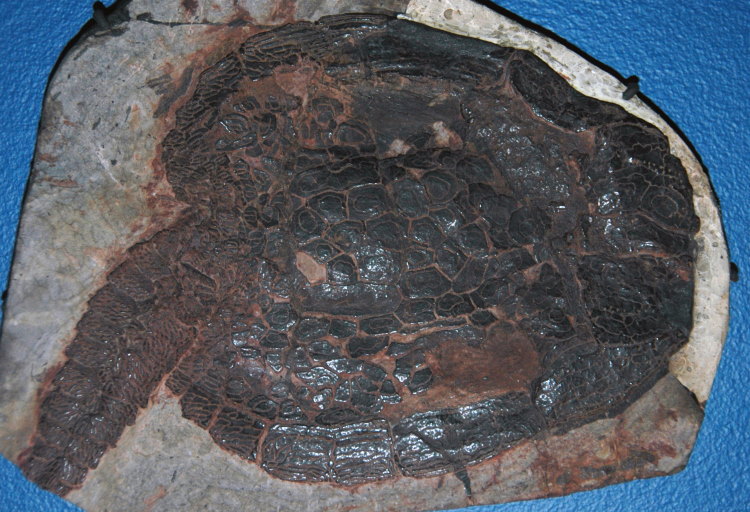 Following these poorly known groups, were four groups of Agnathans which possessed the typical Ostacoderm form. The earliest of these, and the last of the Pteraspidomorpha, were the Heterostraci.

These were fish with 2 good eyes (see fish eyes), heavy armour over the head, often with a rostrum pointing forward over the mouth and odd spines here and there. Also, and unusual in fish of any sort, they had two nostrils (see fish nostrils) or nares.

The Pteraspidomorpha were superceded by the Cephalaspidomorpha. Of these, the Anaspida and the Galeaspida evolved first, followed closely by the Osteostraci. All these animals are well known from the fossil record because of the bony plates they had protecting their heads.

Or in the case of the Anaspida, because they had small, plate-like scales (Anaspid means ‘no shield’).

The Anaspids were the first fish to have lateral (side) rather than ventral (belly) gill openings. The Anaspids are believed to have been fairly active fish. Whereas the Heterostraci and the Galeaspida are believed to have been slow moving bottom dwellers, feeding on rotting plant and animal material sucked from the mud. They are unique among the Agnathans in having lobed tail fins, something which is more common in modern fish.

The Agnathans were around until nearly 360 MYA – in some cases – and even until about 210 MYA in the case of the Conodontia. The jawed fish (the Gnathosomes) who were eventually to replace them in the world’s waters – and later to give rise to the rest of the vertebrates – were already appearing as early as 425 MYA.

The skeletal framework for the jaws came from modifications of the first gill arch. The ability to bite, rather than just filtering, sucking and rasping, greatly increased the fish’s range of available foods.

At about the same time as this happened, paired fins (eventually to become our arms and legs) evolved also. Fins give the fish lift as it moves forward, an important aspect of the physics of swimming.

The earliest jawed fish were called Placoderms and Acanthodii and they first appear in the fossil record about 435 MYA.

Placoderm means ‘plate skin’ and most Placoderms had amour plating – particularly over the head and/or bony scales (see fish scales).

The Placoderms are fascinating not only because they evolved jaws and paired fins, but also because they evolved the first primitive air bladder. In the Osteichthyes, these would eventually become the lungs that would allow vertebrate life to leave the seas and live on land. The Placoderms then, had all the essentials to be a very successful group. However they were extinct by 360 MYA – perhaps because they could not give up their heavy armour.

Most Placoderms had large armoured heads and forebodies. Scientists recognise about 9 orders of Placoderms, the best known of which are the Arthrodira and the Antiarchi.

The Antiarchi ranged from 15 to 40 cm (6 to 30 ins) in length and are believed to have been bottom dwellers. They had weak jaws and a long pectoral fin encased in armour. 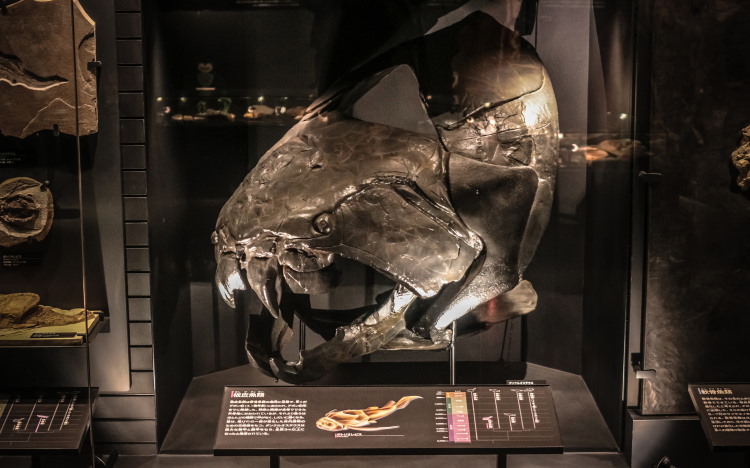 The Arthrodira, who appear to have evolved first in fresh water environments, were sometimes much larger – reaching 9 m (30ft) in length in some species such as Dinichthyes and Titanichthyes. They also included some ray-like species such as Gemuendina spp. Like the Antiarchi they also had their head and forebody enclosed in armour, though not as heavily as the Antiarchi.

The Acanthodii were basically shark-like fish. They had bony plates, but lacked the heavy head armour. This made them faster and more manoeuvrable.

Most species were relatively small as far as we know. They had lateral eyes and large teeth in their jaws, as well as dorso-lateral spines.

They were bony fish and most species appear to have lived in fresh water environments. The Acanthodii were successful for much longer than the Placoderms. They remain in the fossil record for 175 million years, up until about 275 MYA.

Modern Day: Chondrichthyes and the Osteichthyes

About 20 million years after the first appearance of these two now-extinct groups, the ancestors of modern fish come into the fossil record at about 210 MYA. Both the Chondrichthyes and the Osteichthyes seem to have evolved from different ancestors at the same time.

The Chondrichthyes are the sharks and rays of the world. Two subclasses evolved about 30 million years apart. The Elasmobranchii first, followed by the Holocephali. Both these groups are still extant and thriving in our modern waters, often little changed in basic plan from their earliest members. A third subclass, the Cladoselarchii  (large, shark-like animals) appears slightly after the Holocephali, but the only appear to have survived for a short while and the fossil record disappears 15 million years after it started.

The most successful group of fish ever, and the group whose members dominate our modern seas as well as our fish dinners, are the Osteichthyes – the bony fish.

The first bony fish to appear were the Chondrostei (Bichirs, Paddlefishes and Sturgeons), arising about 410 MYA – and they are still around today. After them came the Dipnoi (Lungfishes) at about 407 MYA and then the Actinistia (Coelecanths), the Osteolepiformes and the Panderichyida all around 460 MYA. The last two of these groups are now extinct as of about 250 MYA.

The majority of modern fish are in the group Neopterygii. The Neopterygii are believed to have evolved from an ancestor of the Chondrostei, however they are late comers in the fossil record appearing only in the late Permian about 250 MYA. Since their appearance they have been very successful and most of the fish you see today are in this group.

Well, I hope this has been an interesting introduction to fish evolution.

Perhaps not you like to learn about fish development.