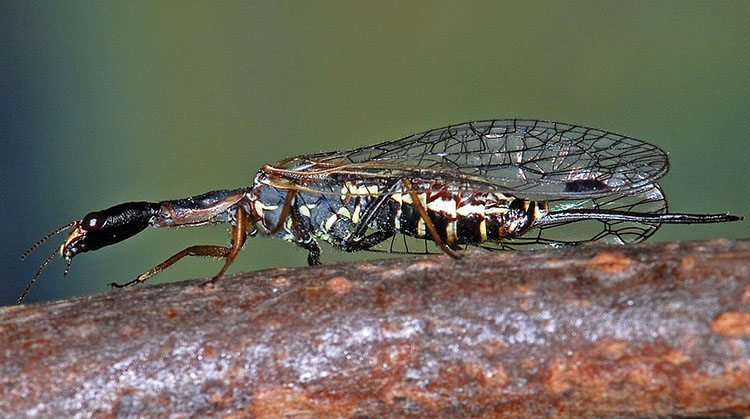 Snakeflies are an ancient lineage of insects that once had a global distribution.  However in our modern world they are limited to temperate or high altitude areas in the northern hemisphere.  According to the Catalogue of Life there were 253 living species as of March 2021.

The Raphidioptera are small to medium sized insects with wings ranging from 5 to 20 mm is length.  Adult Raphidiopterans are characterized by their possession of a prognathous head and a long, thin prothorax that makes it appear as if the animal has a neck.  It is this extended prothorax that is the reason for the order’s common name of Snakefly. They have two pairs of large, similarly-sized, transparent, many-veined wings with a pigmented pterostigma and long thin filiform antennae.  The females have a long, easily visible, ovipositor.

The larvae, exhibit a terrestrial life-style, and an elongate, flattened body.  They can be recognized by their possession of a prognathous head with chewing-biting mouthparts. They possess a soft, 10-segmented abdomen.

Both adults and larvae are carnivorous predators feeding on other arthropods, mostly other insects, however the adults have been known to eat pollen as well. They are holometabolous insects with a life cycle that involves eggs, larvae, pupae and then adults.

Snakeflies can be found in most temperate and arboreal ecosystems, including all types of forests, macchias and even areas limited to scattered shrubs. In tropical zones they are only found at high altitudes, up to 3,000 meters.

All known snakeflies are active predators searching out soft-bodied arthropods as prey.  They have strong biting mouthparts with fierce mandibles to facilitate their catching and holding suitable prey.  They are primarily entomophagous and seem to have a strong liking for aphids and other members of the Sternorrhycha.

The larvae seem to have a more diverse diet than the adults and prey items may include eggs and larvae of any insects, particularly Lepidoptera, Hymenoptera, Coleoptera, larvae and adults of Psocoptera, Auchenorrhyncha and Sternorrhyncha, and also Collembola, mites and spiders.

The larvae of many species of Inocelliidae are corticolous (meaning they live under the bark of trees) but most species of Raphidiidae and, as well as some Inocelliidae species, live in the soil or the leaf litter around the bases and among the roots of trees.

Because they inhabit seasonal ecosystems most snakeflies spend some part of the year in hibernation, during the colder months.  Which stage that hibernates varies between species. Different species may hibernate as the last larval stage, the penultimate (or even an earlier) larval stage, or as a pupa.  As far as we know no Raphidiopterans ever hibernate as an egg, a prepupa or an adult.

In studies involving Palaearctic species around 5–15% of a population are usually parasitised.  Mostly parasitism affects the larval stages.  Parasites may include various protozoans and a selection ichnuemonid, chalcid and braconid wasps.

Where they are common, snakeflies are valued as predators of crop pests.  In an early attempt at biological control, an unidentified North American species was introduced into Australia and New Zealand in the early twentieth century (about 100 years ago) however it did not become established and so failed as a pest control agent.

Courtship and mating follow two basic patterns of behaviour. Two methods of copulation have been observed; the first, which is characteristic of the family Raphidiidae, involves the male hanging head-first from the female and being carried by her.  The second method, in which the male crawls under the female attaching his head in fixed connection to the fifth sternite of the female, is known from the family Inocelliidae.   Copulation lasts from between a few minutes to one and a half hours in Raphidiidae; but is much longer, up to three hours in Inocelliidae.

The eggs take from a few days up to three weeks to hatch. The larval stage is much much longer, nearly always being at least a year long and in some cases may last for up to 6 years. The larvae do not have a designated number of instars they must pass through before they enter metamorphosis; some species can have as many as ten or eleven, others less.

Evolutionary History of the Raphidioptera

The Raphidioptera are fairly common in the fossil record with fossil Raphidioptera species having a wider distribution and greater diversity than modern snakeflies.  Snakeflies were much more common in the Meocene era than they are now with 34 genera and about 119 species so far described in four extinct families.  Although this species count is less than the current extant species list, it is likely that the known fossil record only represents a small percent of the species totals across the eras.

The earliest known fossil snakefly is Juroraphidia longicollumgen from the middle of the Jurassic period (~170 million years ago).  This species was collected from the Jiulongshan Formation in Inner Mongolia, China and is in excellent condition as a fossil. Scientists believe a major radiation of snakeflies occurred in the early Jurassic more than 200 million years ago.

Classification of the Extant Raphidiopotera

The extant 253 species Raphioptera are divided into just two families and 33 genera.