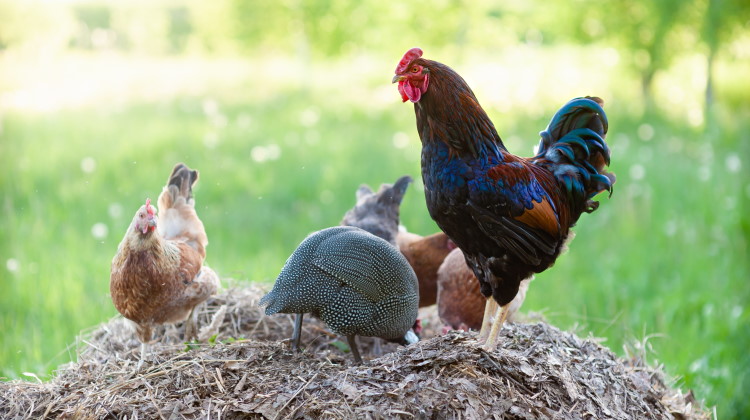 However, unlike most other animals, their breeding rituals and special physical constructions are often visible to us.

This opens a door of wonder and fascination to all. For besides the great variety in nest construction and placement, birds exhibit – somewhere – just about every breeding strategy you could imagine (such as leks).

Birds are limited by the fact that they all lay eggs and – like us – they only come in two sexes. But apart from this, they exhibit a continuous spectrum of options, from strict social and genetic monogamy… to total promiscuity.

Humans like to categorize the world in order to facilitate understanding. However, nature seldom exists in neat boxes. Normally the boundaries are blurred, often non-existent and the categories we apply are averages – focusing on centers of density.

This problem is evident in the question of what is a species, but even more so in the categories we use to define bird mating systems.

The main categories that bird mating strategies fall into are:

Three other minor categories that fall partially outside of these boundaries are the co-operative breeding species, the brood parasites and the megapodes.

Both polyandry and polygyny can be simultaneous (many partners at the same time = a harem) or successive (one partner after another).

The megapodes are unique in that the eggs are not incubated and there is no parental care of the young. Thus only the mating component of normal bird breeding systems applies to them, though in some species males do care for and maintain the temperature within the mounds.

Burying eggs is what most reptiles do and – for this reason – many researchers consider that the megapode system is representative of the earliest bird breeding system.

‘Brood parasites’ are birds which lay their eggs in other birds nests…. cuckoos and cowbirds are the best known examples.

‘Co-operative breeding’ birds are species where a pair or two of dominant birds are the core of a breeding effort. They are assisted in territorial defence and feeding the young by a number of other non-breeding birds.

You will have noticed that earlier I described some birds as being socially and genetically monogamous.

The distinction between social and genetic components of a species’ or individual’s breeding strategy is important.

Social monogamy is the situation where one male and one female bird work together to raise a brood of young. No other birds help them and they help no other pairs or groups. Genetic monogamy is where the same pair of birds are the genetic parents of all the young in a brood.

These two systems are not always linked however. Though many socially monogamous birds are also normally genetically monogamous, in quite a few species this is not the case.

In many species of birds, social monogamy is balanced against genetic promiscuity.

This means that the female will mate with other males and the male with other females – and as such the young raised by one pair of birds need not all be sired by the same male.

The degree of extra-pair copulations (as researchers call these matings) and the number of young actually fathered by the male in a pair-bond varies with each species. It reaches its greatest expression in the Maluridae (Fairy Wrens), where on average over 60% of the young in a nest are fathered by one or more males which are not the female’s mate.

Ornithologists see the evolution of bird mating strategies as a battle between the sexes.

This battle coincides with – and is at cross-purposes with – the competition between species.

Both males and females want to produce as many offspring as possible. This seems to be a common drive shared by all living things. However it is not enough to just produce loads of babies… you only become a winner in the game of life if your young grow up and reproduce themselves (and on and on, ad infinitum).

The two extremes of the continuum of this aspect of life are called by scientists ‘r’ and ‘K’ strategists.

Sperm is cheap, while eggs are expensive.

A male bird can father far more young than one female can produce. The ideal situation for a male is where he spends his whole time mating females, each of whom raises a clutch of young. This way a successful male gets to father loads of young, this is polygyny.

A female bird can never potentially produce as many young as a male, however she can produce a lot more if she doesn’t have to look after them once she has laid the eggs. Her ideal is where she concentrates on laying eggs and the males look after everything else.

There is a limit to how many young one adult bird can incubate and care for after hatching. This limit varies between species and is greatly effected by the diet of the young and how much looking after they need.

In practice this means a female can produce more eggs than one male can care for, so a female’s ideal reproductive strategy is polyandry.

Birds which feed on the ground or in the water can have their young hatch out precociously.

This means that when the young hatch, they have their eyes open, possess feathers and can peck at food for themselves straight away. They do not need to be fed by their parents, though one or both of their parents may show them where to find food and protect them from predators.

Birds that find their food on the wing or in trees, need to be able to fly in order to feed. As wing feathers and flight muscles are costly to develop – and do not develop well inside the egg – there is inevitably a period of time between the young hatching and their being able to find their own food. During this time they need to be fed by their parents.

It is this necessity that effectively prevents most birds of either sex fulfilling their whole reproductive potential.

What it means is that both parents working together can feed and successfully rear far more young than one parent can on their own. This is the nature of a partnership: both sexes sacrifice some of their reproductive potential in order to maximise their reproductive reality.

This seems to be true for the majority of birds and results in most species forming pair-bonds for reproductive purposes.

In many species these pairs are different each year. But for some, such as Swans and Albatrosses, pairs mate for life – renewing their bond each spring as a new breeding season gets underway.

Social monogamy then is by far the most common reproductive strategy in birds, with over 90% of birds known to be socially monogamous.

Genetic monogamy is not as universal, but in comparison with social traits, genetic ones are much less well known.

The costs and relative newness of the DNA testing techniques that detect genetic breeding traits means that comparatively few species have been studied. Of 216 sub-families surveyed by David Lack in his 1968 book, “Ecological Adaptations for Breeding in Birds”, 198.75 or 91.8% are primarily or totally monogamous. Of the remaining 8.2%, 4% are polygynous, 3% are promiscuous and 1% polyandrous.

The second most common, though still much rarer, breeding strategy is Polygyny.

Polygyny is where one male has more than one female partner. There is room for a lot of variety here.

One of the factors is how much the male needs to contribute to raise the young. In some birds the young hatch precociously (see above) and in these cases the female can often raise the young on her own – as all she needs to do is build a nest, lay the eggs and incubate them.

In species like this a male only has to mate with the female then leave her to it. Under these circumstances he can have as many mates as he can attract.

One way a male can attract mates is through the possession of a territory. If he can defend a territory that is good enough to support two or more females raising a brood within its boundaries, then he may well end up with more than one mate.

Of course, in other species, no territories are kept. If this is the case then it is likely that the male will have a small area where he displays or advertises himself during the breeding season.

This may be as simple as a perch – where he sings and puts on a display with often colourful feathers – or as complex as the great arenas decorated with numerous treasures, used by many of the Bowerbirds.

Further to all of this, some male birds not only maintain a territory but will also help incubate one or both broods and help feed one or both broods. In these cases the female may be partially able to raise a brood on her own, needing only a little help from the male.

Also, polygyny as described in all these cases is essentially sequential.

However in some cases polygyny can be consecutive, with the male bird mating and partially raising a brood with one female before absconding (leaving) to start a second nest with another female.

Lekking is an extreme form of polygyny.

A lekking species is one where the males all gather in one place in order to display to females.

Females then come to the lek (the site where the males are) and choose one or more males to mate with. If females mate with more than one male at a lek, then technically the species is called promiscuous.

From an evolutionary point of view, leks may be a good thing for a female – providing that all she needs from the male is good quality sperm. She can come to the lek, choose the best looking male, mate with him and then leave to raise the young on her own.

This only really works if the female can perceive something in the male which indicates his genetic potential as a mate. For example, the bird’s song complexity or volume, feather colour or size, or just the energy he puts into this display.

For the males, leks are a bit like gambling.

Studies have shown that most matings go to only a small number of males, so if you are one of the few top quality males, you will get to father loads of young.

If not, then you may well end up fathering none.

As you can tell, there is a unending amount of variety in the world of birds’ mating systems. It is highly worthy of further study!