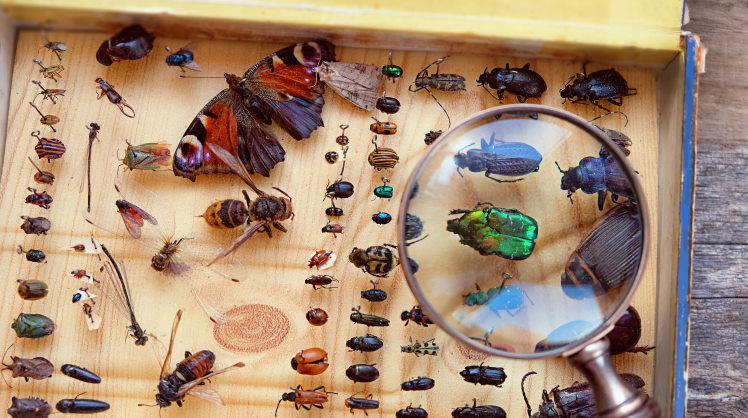 Insect classification can look complicated, in ordinary English not everybody uses the same names for the same insects.

For instance Slaters, Cheesybugs and Woodlice are all different names for the same animal, in different parts of the world.

This is why insect classification is so important. A scientist called Carl Linnaeus suggested in the 1750’s that an international way of naming things should be set up, so that scientists all over the world could understand each other better.

The science of naming things is called taxonomy and though it can become quite complicated, the basics are easy to understand.

On this page, we will examine things from the particular perspective of insect taxonomy.

These last two are so small you can’t see them without a microscope.

Now let’s zoom down into insect taxonomy specifically and look at exactly how insects are classified.

One of which, the Arthropoda is of particular interest to us. This phylum contains the hard shelled, jointed legged animals and is further divided into four smaller groups called Subphyla – or in some classification schemes Classes.

Now the uniramia or class insecta are divided into 28 even smaller, though still pretty large groups called Orders such as:

For instance, the common European butterfly known as Small Tortoiseshell is is a member of all the following sets:

You should note that most animals and plants are known only by their genus and species names, i.e. the small tortoiseshell is Aglais urticae. Note also that while the genus name is spelt with a capital letter, the species name is normally spelt with a small letter. In printed text the pair are normally written in italics, the rest usually remains unsaid.

You should also note that though an animal will generally share its genus, family, order and class names etc. with other animals, its combination genus/species name will be unique to it.

This mean that Linnaeus was the first person to name this moth and that he did so in a work published in 1758. The brackets around his name mean that the species has since been moved to another genus. Linnaeus, being the first person to use this system widely, put a lot of moths in one genus (such as Noctua) and later taxonomists realised that some of them belonged to different genera and moved them – like putting them in a different box.

This means that the species was named and described by Linnaeus, but the genus was described later be a different taxonomist. This process is called taxonomic revision. Also you will occasionally see some species written in a shortened form, e.g., Formica exsecta Nyl., Nyl stands for Nylander and the date is omitted.

I personally do not like this, but people do use it. However it is not much use, if the reader doesn’t know what Nyl. or Hb. stands for and the relevant publication date.

Insect taxonomy and classification can, and in fact does, get extremely complicated. With a large number of people discussing the merits of various taxonomic schemes. The one I have followed here and throughout these pages is adapted from that used by the online database Catalogue of Life – and is a basically functional, if not extremely up to date system.

However at the moment, it is important to realise that the greatest use of insect taxonomy is in the facilitation of communication between workers in similar areas – and that the differences between various schemes are fairly unimportant until you know enough to contribute to the argument.

A basic understanding of the relationships between various groups of insects can be gained from any basic taxonomic setting.

The 29 insect orders are numbered in an approximate series of evolutionary complexity, with the oldest and most primitive groups being listed first. They are further classified together into a number of groups depending on their degree of relatedness.

The first four orders are known as the Apterygote orders because all the adults are wingless. Like the immature stages these have no true metamorphosis and are the most primitive insects alive today.

The other 25 orders are called the Pterygote orders because we believe they all evolved from winged forms, even those like the Siphonaptera (Fleas) which are all wingless now.

These are divided up into 16 Exopterygote orders, which have an incomplete metamorphosis (i.e. no pupal stage) and develop their wings outside of their main body; and the Endopterygote orders, which undergo a complete metamorphosis including a pupal stage and have their wings develop inside the body (which are therefore not visible until the adult insect emerges from the pupa).

Key to the Orders of Insects

The Apterygota (Wingless insects with no true metamorphosis at all)

If you still in search of more glorious taxonomic information, don’t forget to check out our page on Entomology Text Books.