The Shapes, Sizes, Fimbriae and Endospores Of Bacteria

Bacteria are microscopic, single-celled creatures which live mostly on the surfaces of objects – where they grow as colonies.

Both to the world as a whole and to mankind in particular.

In fact, microbiology is a huge and growing industry.

Even if you never intend to study microbiology any further than these pages, it will be good for you to have some appreciation of the roles bacteria play in all our lives.

Studying something you cannot see (something which is not pretty, colorful or cute in any form) is perhaps a more cerebral activity than many people would like.

Bacteria are, however, amazing creatures.

So I have humbly attempted to make the information here as much fun and as interesting as possible!

You can skip straight ahead to the part of this article that interests you here:

Bacteria are one of the most ancient of living things.

Scientists believe they have been on this planet for nearly 4,000 million years.

During this time they have acquired lots of fascinating and different ways of living.

Some bacteria are basically rods, but instead of being straight they are twisted or bent or curved – sometimes in a spiral. These bacteria are called spirilla (singular spirillum).

Spirochaetes are tightly coiled up bacteria.

All these shapes of bacteria are abundant throughout nature.

In terms of size, suffice to say bacteria are extremely small – though they vary dramatically.

E. Coli for example has typical cell volumes of between ∼0.4–3 µm3 (cubic micrometers). Yet some species are less than 1% of this volume and others are as much as 800% larger in size. For more details check out this 2015 study.

Fimbriae (some come with extra bits)

As mentioned earlier many bacteria are regularly shaped (cocci, rods etc.), but this is not true of all bacteria.

Some have unusual appendages or attachments, like long stalks or tubes – and these are called ‘appendaged bacteria’.

Sometimes these appendages are used in reproduction, sometimes they help the bacterium stick to a surface (so it can stay where it wants to be) and sometimes we simply don’t yet know what they are for.

These various shapes are general indications only.

As with all things in nature, there is really a vast continuum of shapes varying between these various central forms. Some bacteria are half way between a rod and a coccus… or only slightly curved.

Some bacteria have other appendages, which are much smaller than those mentioned above.

These come in two sorts – neither of which are very well understood from an ecological point of view – though they both look like fine hairs sticking out from the bacterium, in scanning electron microscopes images.

Illustration of Fimbriae vs Flagellum in an E. coli cell

One sort are called fimbriae (singula = fimbria) which are much shorter than flagella and often much more numerous.

Scientists think that fimbriae may help the bacteria to cling to surfaces. The second sort are called pili (singular = pilus). They are slightly larger than fimbriae and only occur in ones or twos on any given cell. They are believed to be involved in conjugation, an aspect of bacterial reproduction.

Finally, many bacteria secrete a layer around themselves which is made up of polysaccharides with a few proteins.

The resulting layer is quite variable between species, being thick or thin and/or rigid (solid) or flexible (runny).

Some bacteria (notably species of soil bacteria such as Bacillus and Clostridium) can form a dormant, highly resistant form called an endospore. 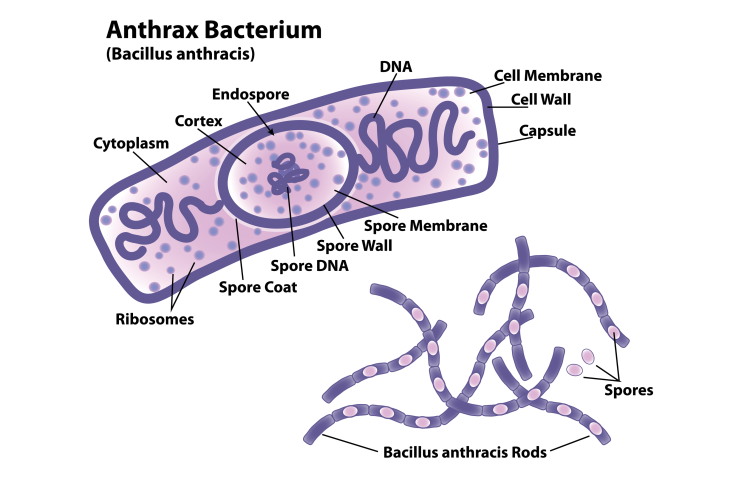 An endospore is formed inside the normal cell and contains copies of all the cell’s DNA.

Endospores are inactive and are used by bacteria to survive times when the environmental conditions do not allow for normal living. In this way they are a bit like seeds, except that one bacterium can only become one endospore.

In 1981, some spores stored in 1947 were successfully germinated – showing that they can survive for at least 34 years. More recently, some scientists have claimed to have found viable (capable of germinating) endospores from the bottom of a lake in Minnesota which are 7000 years old.

Even more amazing, in 1995 a group of scientists claimed to have grown bacteria from endospores taken from the gut of a bee trapped in amber 25-30 million years ago.

Finally, in the year 2000 scientists grew some bacteria from endospores 250 million years old.

This remain to be checked by other scientists, but if it is true then it means that endospores might one day be found and revived from bacteria which lived with the dinosaurs, the trilobites… or even earlier.

Bacteria are friendly creatures, you never find one bacteria on its own.

They tend to live together in clumps, chains or planes.

When they live in chains – one after the other – they are called filamentous bacteria. These often have long, thin cells.

When they tend to collect in a plane, or a thin layer over the surface of an object, they are called a biofilm.

Many bacteria exist as a biofilm and the study of biofilms is very important. Biofilm bacteria secrete sticky substances that form a sort of gel in which they live. The plaque on your teeth that causes tooth decay is a biofilm.

It is part of the human condition that we tend to be consciously aware of those few bacteria that are pathogens, whilst ignoring all those useful species without which life would not be possible. 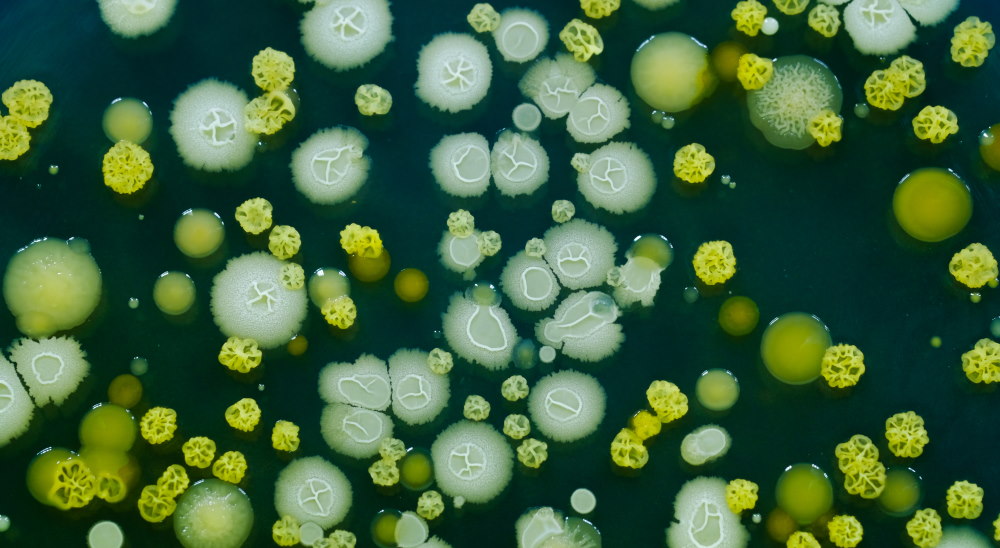 Some types of bacteria cause disease, but others help us digest our food.

Many animals are completely dependent on bacteria to digest their food for them, particularly herbivores.

Further to this, bacteria are responsible for much good in medicine.

They produce the best antibiotics and – with the help of modern microbiological techniques – they can now be used to produce many medically important products.

And even bio-degradable planet friendly plastics!

Most bacterial species are un-named and unidentified.

Tens of thousands of species have been isolated, though they may not yet be allocated to a family or genera, etc. There are more than 15,000 species of bacteria known to be living in the sea.

The distribution is skewed with 397 genera being monotypic – meaning there is only one species in the genera.

This leaves an average of 10 species per genus, for the remaining 409 genera. However, only 89 genera have 10 or more species in them and nearly one third of all known bacteria (32.87%) are to be found confined to just 16 genera.

The most populous genus is Streptomyces with 509 species.

Note: The above information – and other taxonomic information used on this site – was synopsed from a pre-1998 1st edition of Bergey’s Manual of Systematic Bacteriology. Considerable forward strides have been made since then in bacterial taxonomy and the new 2015 edition of the above manual is now available.

However, it is worth noting that there are many distinct varieties of some species and the concept of a species is sometimes a bit fuzzy.

Also – and perhaps more importantly – there remain thousands of species of bacteria undiscovered and/or unnamed.

At the beginning of this century, some Australian scientists looked at bacteria in the stomachs of Kangaroos. They were searching for species that could produce acetates rather than methane from hydrogen… and found over forty species with this capability. Half of these were completely new species as far as science was concerned!

This is just one example of the huge reservoir of unknown bacteria waiting to be discovered.

Some microbiologists claim there may even be more species of bacteria than there are of insects.

Insects being currently the most speciose taxon known to man, at least in terms of named species – with over a million known species. 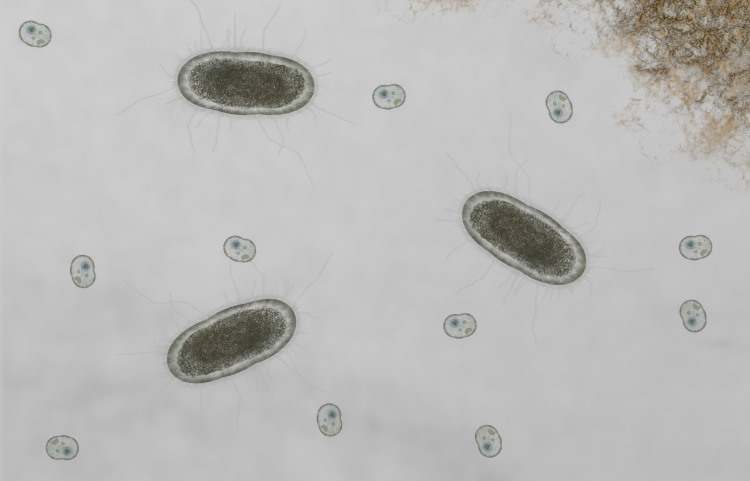 Escherichia coli under the microscope (ovoids)

It is a fact that bacteria live in a whole series of worlds that really stretch our imaginations:

Bacteria can be found in all of these places.

The way bacteria live and die is very different from our lives.

It is worth meditating on (or even just day-dreaming about) a life which can be as short as 15 minutes. One which is often lived entirely in one spot – less than 1/1000 of a mm across – and where concepts like day, night, weather and up/down are meaningless.

Finally, some bacteria – obviously – can live quite happily without light.

However where they are unique is when they are primary producers (like plants) and live without light. They do this by reducing or oxidising various chemicals from Hydrogen through Iron and Sulphur.

So now you know a bit about the shapes, sizes and structure of bacteria. What do you want to learn now?